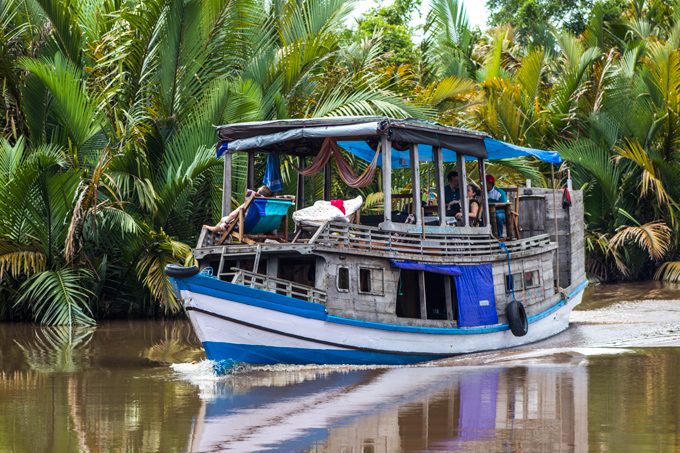 You don’t hear much about Borneo. Six months ago, what I knew about Borneo could fit on a postage stamp; better yet, in a Tweet. I did know that Borneo is home to more species than anywhere else in the world. Armed with that piece of knowledge and little else, my husband and I traveled from Guam to Hong Kong to Bali then to Borneo to explore this biological hothouse for ourselves. We were pleasantly surprised at the masterpiece our cook whipped up in what I could only imagine was a single pot stove and 4-feet of vertical space. (I never really went below deck, not wanting to intrude on the crew’s minuscule private space. I did peak in to the kitchen just before our journey ended.) Our first lunch on the klotok had us licking our chops – whole fried “goldfish” (according to our guide), bathed in a sweet and salty soy garlic sauce, sautéed greens (we call it kang kong in Guam), and tempura battered eggplant. Day two on the klotok allowed for two hikes to feeding sites. We ventured to the heart of Tanjung Puting, Camp Leakey, another half-mile walk through the singing rainforest. A large female orangutan named Siswi was tucked under a raised house in near slumber. Dian told us she was the queen of the forest, but had been jilted by her king. She would follow him everywhere, the guide said, but he was indifferent to her. To our surprise, a long-armed gibbon joined the meal, hopping with seeming hydraulics from tree to platform, only to be waved away by the dominant male, Ponorogo.

The gibbon, named Boy Boy, obliged temporarily, but eventually worked his way into the meal and there sat three adult orangutans, one baby, and a wiry gibbon all drinking out of the same bowl. Ponorogo, age 27, eventually wandered off, and a female with baby in tow followed suit, but took her meal to go, the large plastic bowl tucked under one arm, baby in the other. A stroll through a local village allowed us to stretch our legs and see how the other half truly lives. Like any other community, the morning found mothers walking their children to school, careful to have applied clay to their young cheeks to avoid sunburn. Two women bathed in the river, fully clothed but with soap as we walked back to the boat across the rickety wooden planks.

Can I ask which organizer you used for this tour? I’m looking to arrange something similar for a group. Thank you!

Which company did you use for your boat trip?? What was thost cost per person?