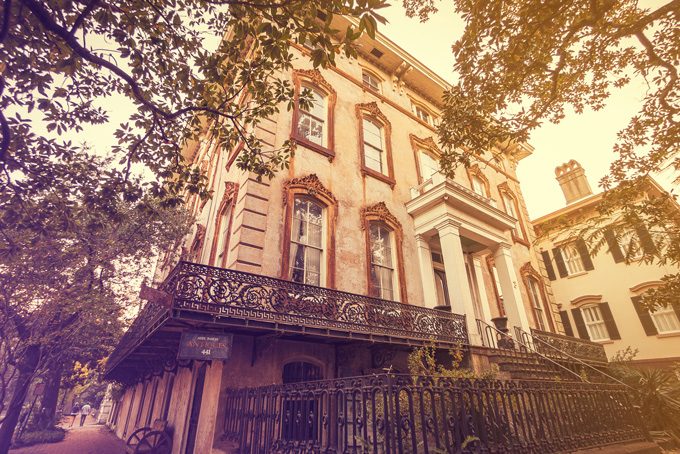 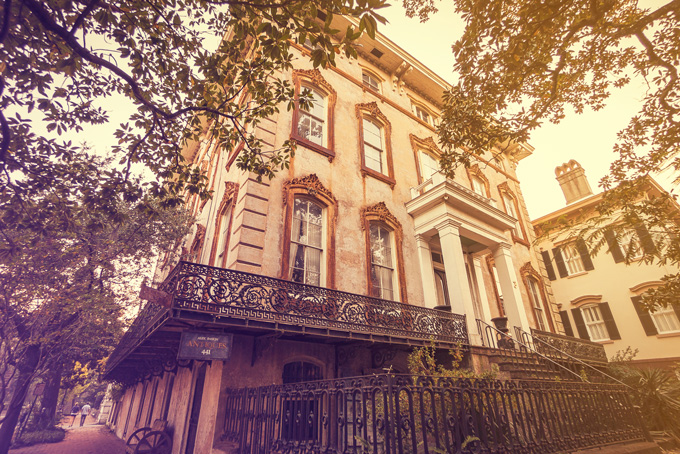 It’s so charming, I am flabbergasted it’s not raved about more… by everyone.

Is Savannah the South’s best kept secret? I would argue so.

I spent about a month there, drifting through downtown like a wide-eyed tourist. I was hopelessly enamored with the Spanish moss wafting gracefully from the live oak trees, the cobblestone streets, the ornate crumbling buildings, the chic bars and incredible seafood, the friendly people, and the 22 city squares. (Monterey Square was my favorite.) Savannah, Georgia feels like a tiny Barcelona.

I visited Asheville and Charleston, but Savannah was my favorite, hands down. Unlike the former, Savannah a bit more grit and a touch more soul. It is real and lived in and interesting beyond downtown.

I was surprised to fall in love with Savannah, Georgia because I am not a southern girl by any definition of the word. I am from Cincinnati and lived in Maryland before I did my time in Texas (at least that’s how it felt when I was forced to move there at 12). After I left Texas, I never imagined myself seeking out southern cities. But in October of 2016, we moved into our newly remodeled Airstream and immediately realized it was too cold to go north as planned. We started scoping out southern cities. After reading Jamie Beck’s raving reviews of Savannah on Ann Street Studio, I realized I needed a more open mind.

I’m so glad I shook off my preconceptions of the South and found Savannah.

Savannah, Georgia is a college town and SCAD (Savannah College of Art and Design) owns tons of buildings downtown, all lovingly restored to their former glory by staff and students. In fact, one of my favorite restaurants, Gryphon, was designed by SCAD students.

I cannot praise Gryphon enough, both for its food and for its character. As a former pharmacy, it has all the vintage cues that will make it impossible to put your camera down, but you should do so long enough to try the Asian-marinated salmon (with Moroccan-spiced couscous, spinach, mandarin oranges, toasted almonds, Kalamata olives, red curry sauce and lobster aioli). The Indian spice chai was delicious and would be perfect for an afternoon spent munching on scones with Devonshire cream and jam. It all sounds very fussy, but Savannah doesn’t roll that way. It’s not a style-over-substance place — it’s both.

My second recommendation is the impossibly chic cocktail bar Artillery, also downtown. Located in a building circa 1896 that housed — you guessed it — artillery, I recommend you order the Bit of a Pickle.

If you’re craving Southern food and you love sharing, head to Mrs. Wilkes’ Dining Room for a family-style dinner with all your cheat-day favorites like fried chicken, macaroni and cheese, potatoes, and gravy.

To walk off some of those carbs, head to the riverfront before sunset and watch the boats flow in and out of the harbor. (Wear comfortable shoes, as the streets are cobblestone.) The shops on River Street are hopelessly touristy and tacky, so don’t waste your time.

Instead, head to Shop SCAD for inventive art, jewelry, and clothing created by students.

Outside of downtown, Green Truck Neighborhood Pub has one of the best veggie burgers I’ve ever tasted. It’s a tiny place that fills up fast at meal times, so get there early.

Venture out to Tybee Island for solitude, wind-swept beaches, and marshland. Pretend you’re Jane Eyre if you like. The landscape has a gothic vibe. In fact, all of Savannah feels like one big period drama. Whether you want to pretend you’re in a Twain, a Hemingway, or even a Grisham (yes, I realize none of those authors wrote from Savannah), you can escape into the city and feel like you’re in another world.

Here are my favorite places in Savannah: 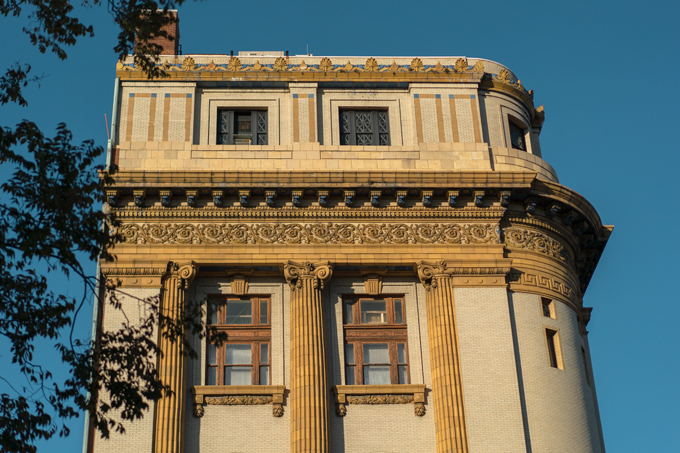 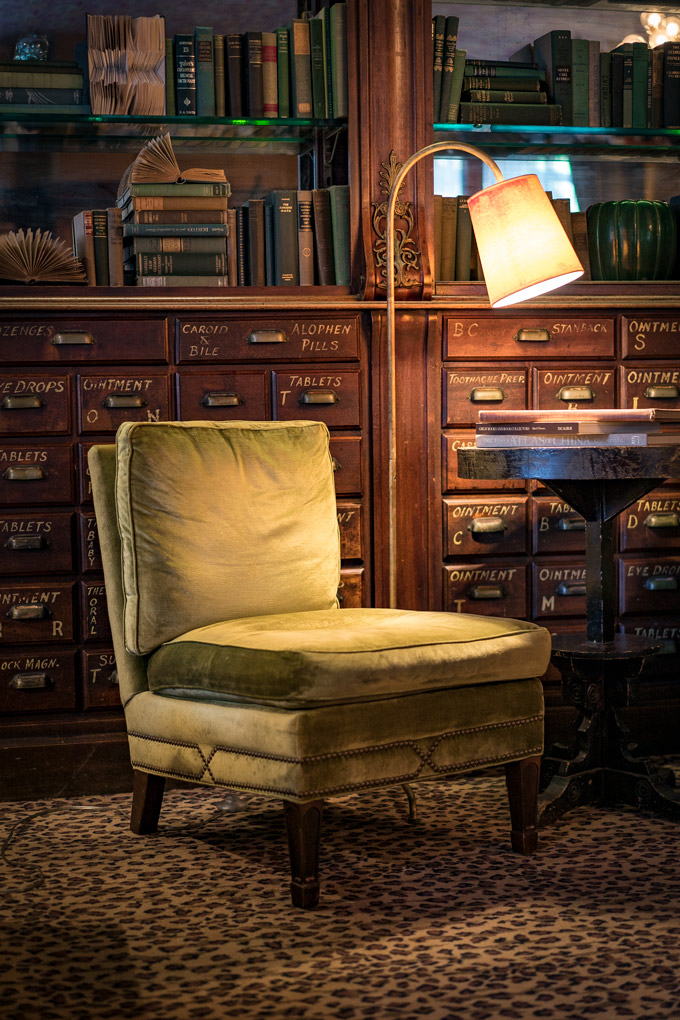 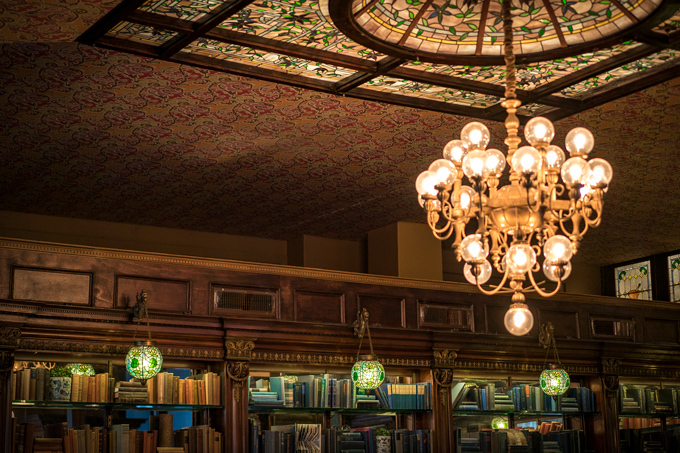 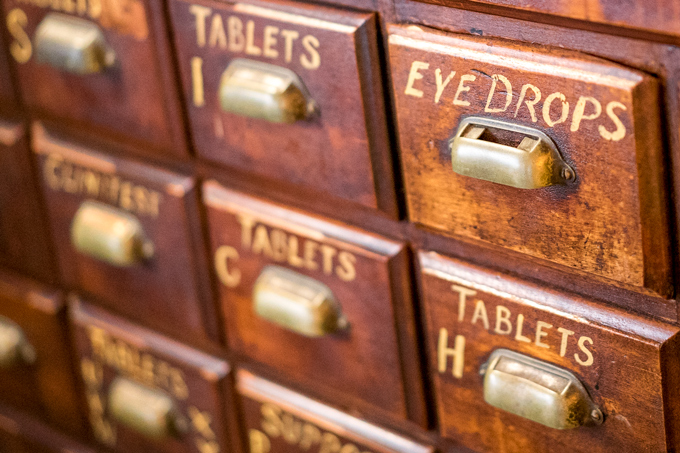 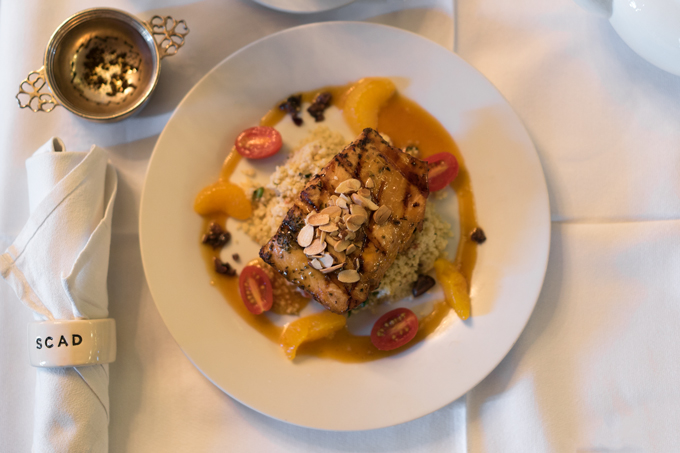 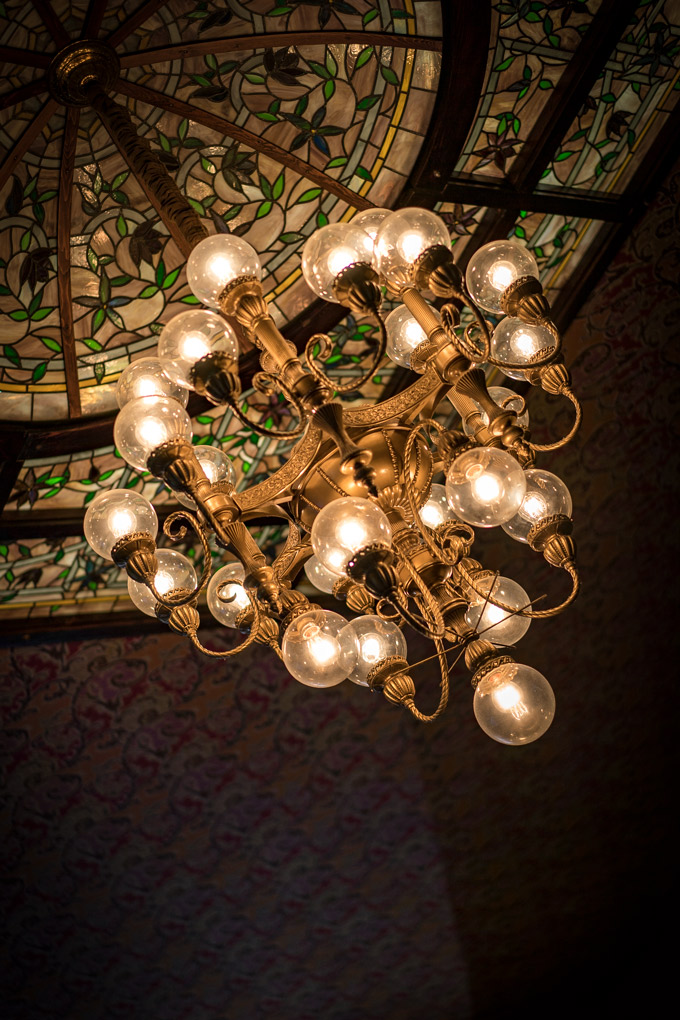 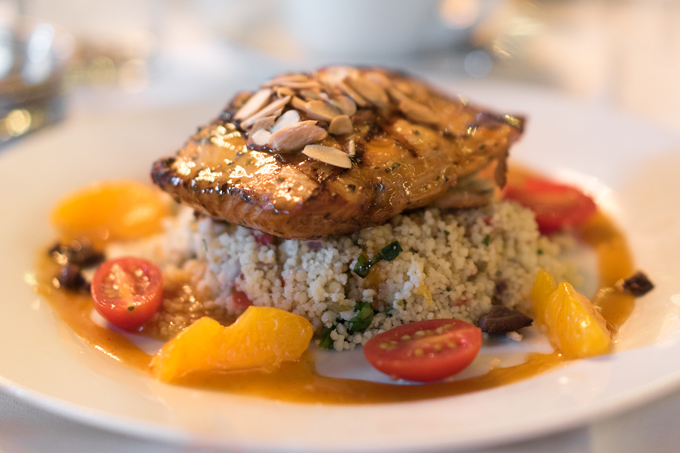 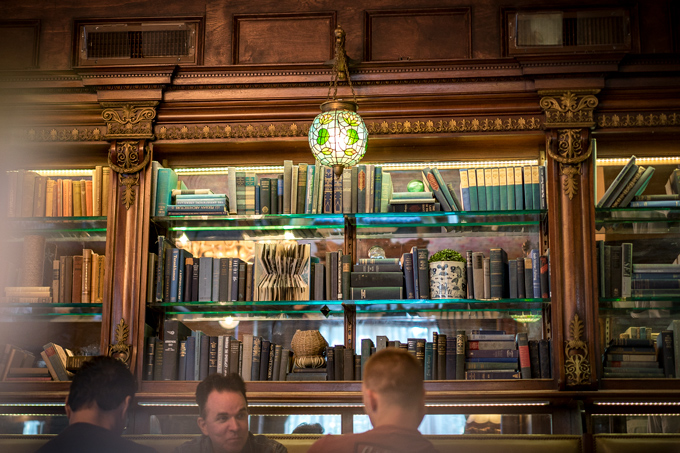 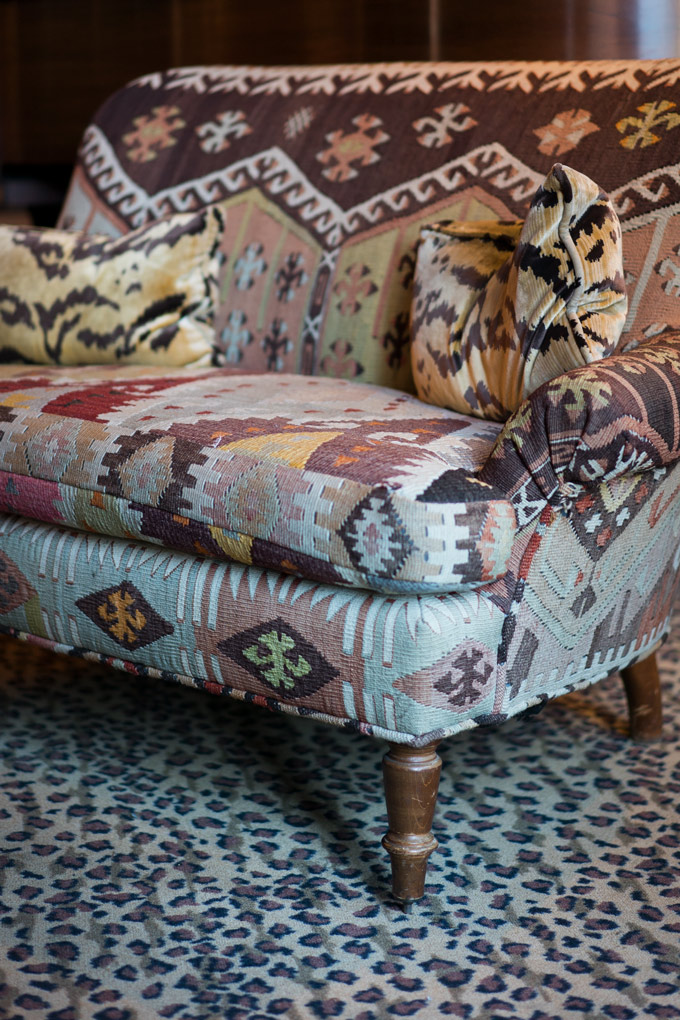 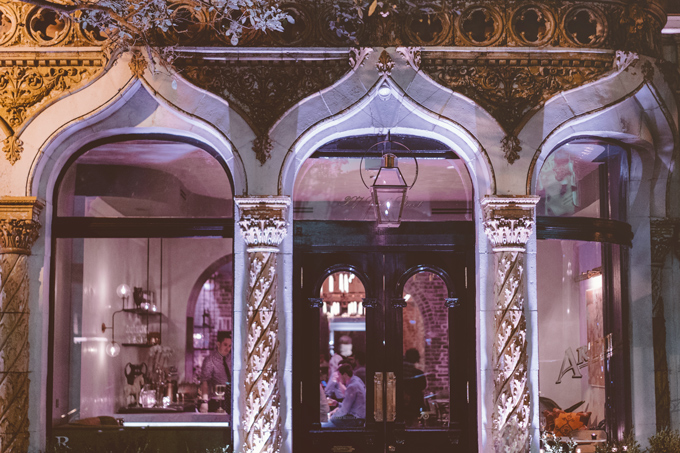 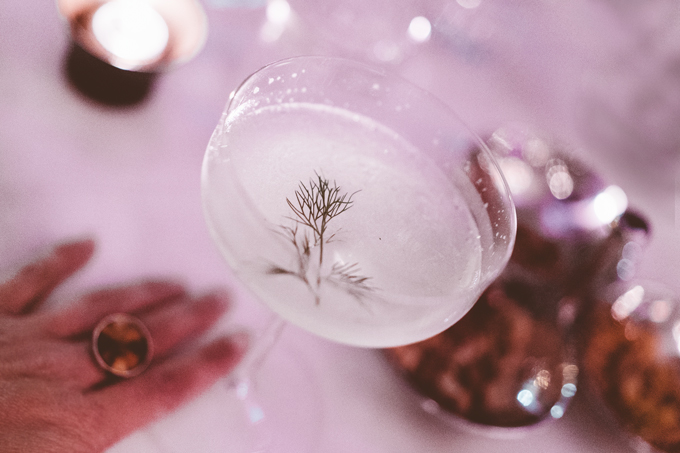 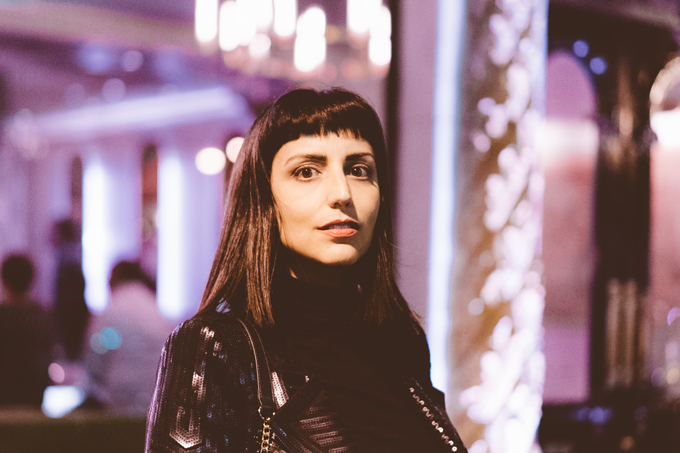 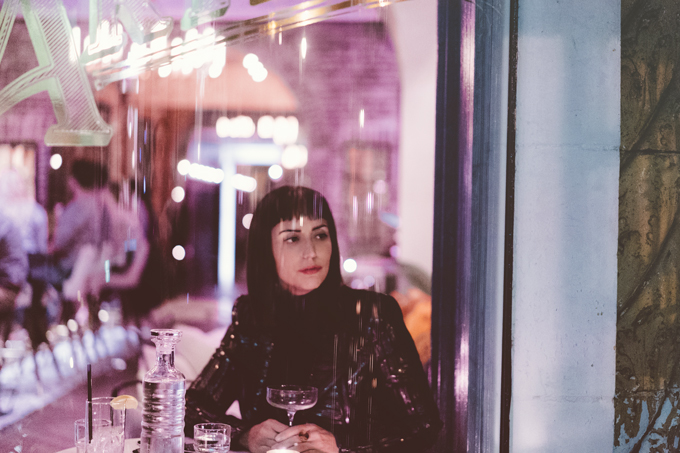 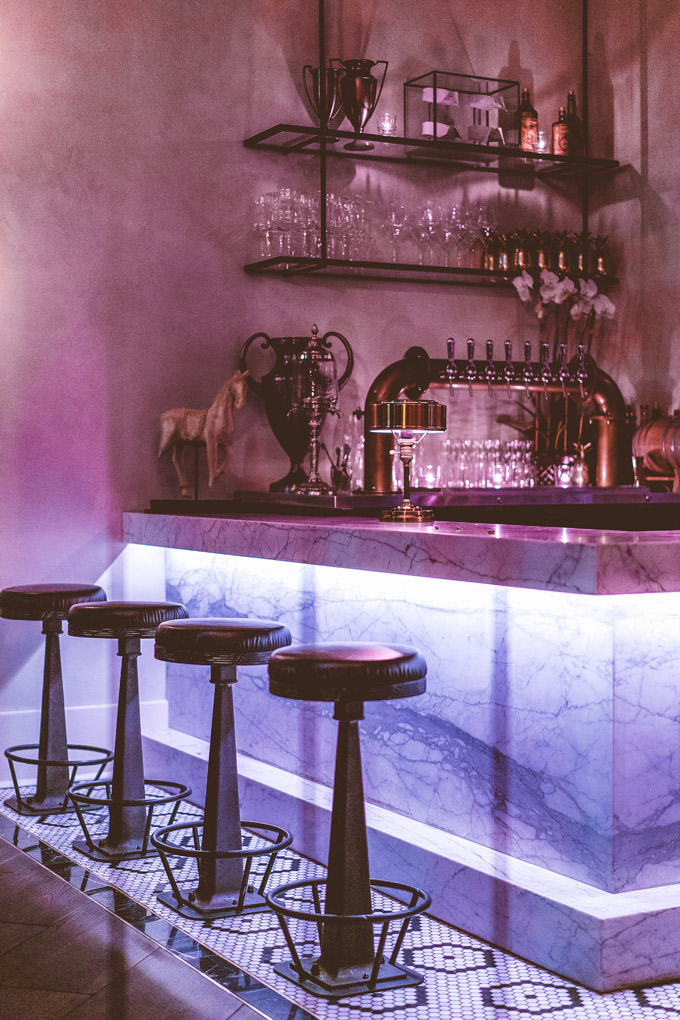 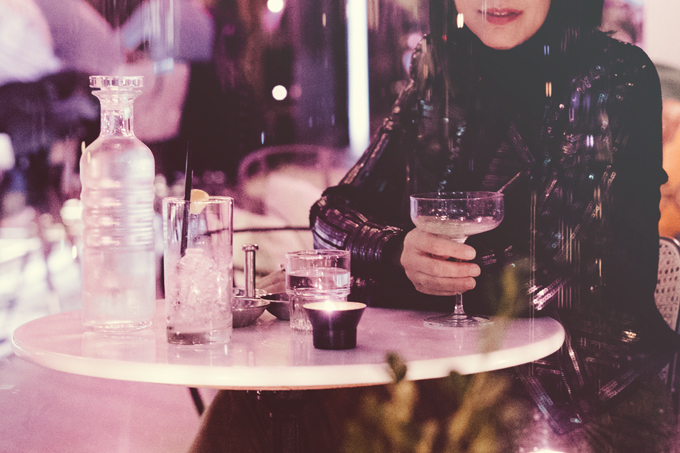 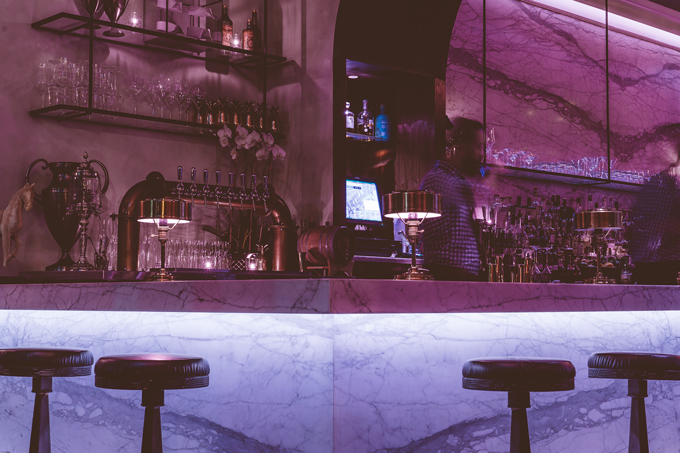 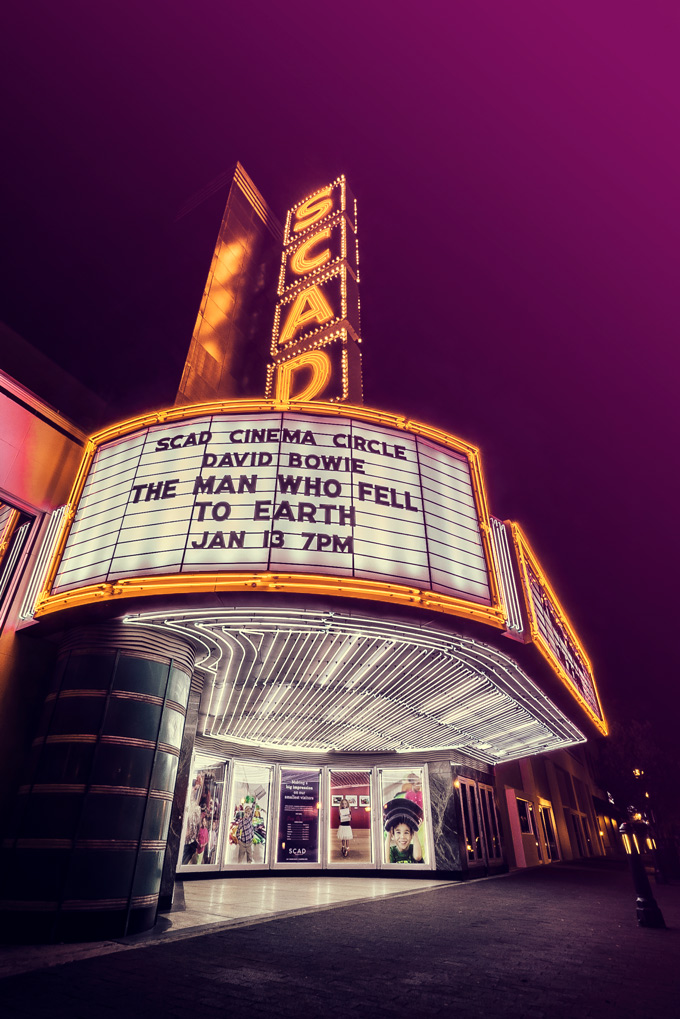 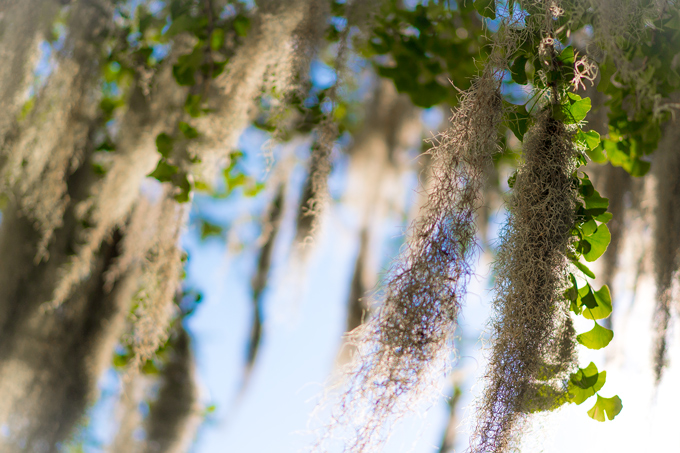 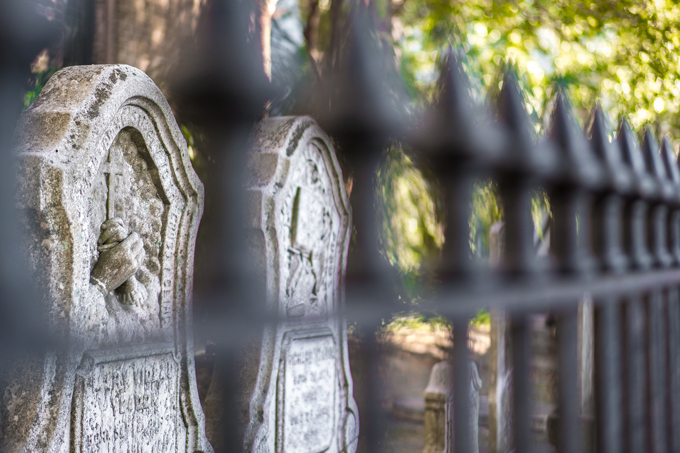 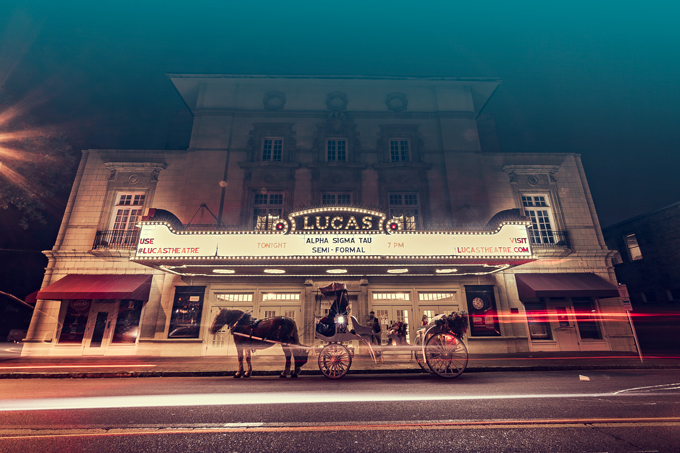 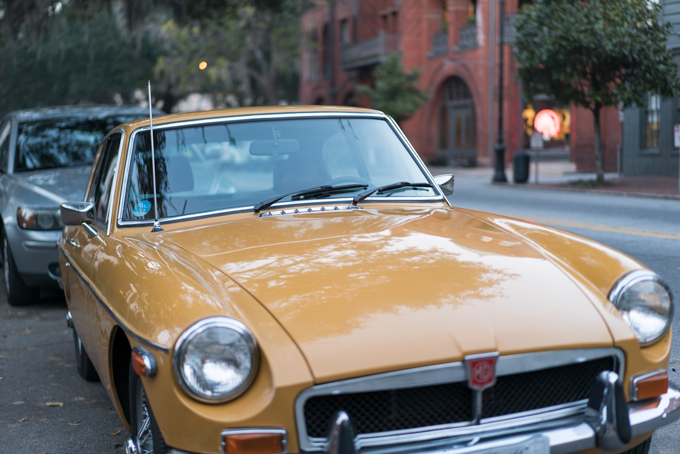 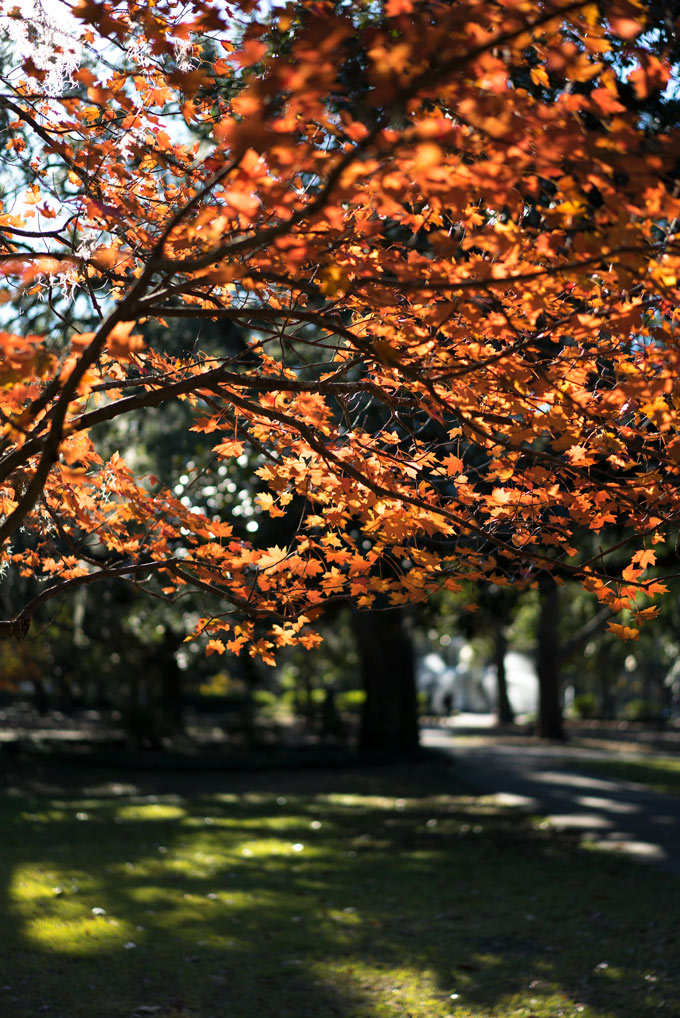 In my next post, I’ll tell you all about the charming farm and campground that was my home for a month in Savannah. Stay tuned…

Have you been to Savannah? 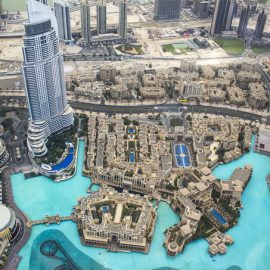 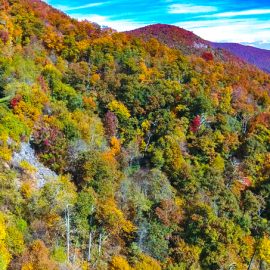 Looks amazing! Another one to add to the travel bucket list. Thanks for sharing 🙂

I’ve heard nothing but great things about Savannah. I love your photos…it looks so intriguing. I’ve read several novels set in Savannah and it seems like it has a rich, interesting history too.

Hi Kim. Care to recommend any Savannah novels? Thanks!

I’ve not yet been to Georgia, but would love to explore Savannah when I finally do get there. Thx for the great post!

I hope you do. Thanks for reading, Doreen!

Savannah looks pretty atmospheric in this post. I’m sure you get a different feel of the US in its Southern parts.

Atmospheric is right! Can’t wait to share my farm photos.

Such amazing photographs. Staying in Savannah for a month would have been such a great experience. Southern US has always attracted me. I wish to visit this place soon. Thanks for the insight.

I would love to go to Savannah and your pictures make that desire grow even more, especially because I love old looking buildings.The place looks like you have stepped back in time. How cool is it to stay there for a month and take it all in.

Oh wow the decor at Gryphon and Artillery looks incredible! I’ve never heard of Savannah before but it seems like it would be a really nice place to spend a month. Your pictures remind me a lot of an old-time movie set, which seems totally different from what I’d typically think of when it comes to the States.

Thanks for reading, Rhiannon. I did feel like I was in a movie!

Your pictures are absolutely beautiful! I especially love that last one of the maple tree, just gorgeous colors and light coming through. What camera/lens do you use?
I heard about Savannah and would love to travel there! Sounds so picturesque with the Spanish moss and old buildings. Totally a city worth exploring one day. Thanks for telling us a little bit about it 🙂

Thank you! I shoot with Sony a7S and now a7SII. Favorite lens is the Sony Zeiss 55mm. Shop here: https://globalgirltravels.com/shop.

Haha did your time.. that’s a interesting way to put it 😛 I’ve never been interested in the States for some reason but Savannah looks totally different from I thought it’d be like. I love the vintage flair and it sounds like a super chill place with great food. Thanks for showing us a different side of this Southern place!

Our Life, Our Travel

Your pictures are gorgeous! Haven’t heard about this place but your photos make want to visit it!

“Spanish moss wafting gracefully from the live oak trees.” Now this sounds like a romantic poem. It make
me want to go and see the place myself. One of my friend was in Georgia last
year and she told me great things about Georgia. Though I am not a seafood
person. I hope, one can find vegan food easily here.

Thanks so much, Abhinav!

Beautiful photos. I have always wanted to visit George in general but never got the courage to go as most likely I’d be going on my own. I have a friend who moved to Georgia and i think it might be a good idea to traverse GA and stop in Savannah.

Seems pretty safe for a solo trip. Just gotta keep your wits about you, as you do anywhere else.

I completely agree with you! Savannah is so awesome.

I am awestruck by your pictures. They are ridiculously stunning. And yes Savannah is hauntingly beautiful. I really want to visit it now. after all that you have shown me, i cannot resist the temptation!

When you say Savannah, the first thing I used to think about was the book Midnight In The Garden of Good and Evil, but now your beautiful and charming photography will be my primary reference. Your descriptions and tips also make Savannah irresistible. We’ll try to stop in next time we’re in the USA.

Yes, you can actually tour the house which has been made into a museum.

Beautiful post! I’ve never seen anything about Georgia so this is great 🙂

Looks like you had an amazing time! Savannah is on our list of places we want to go to this year!
xo Jessica
http://www.whatsfordinneresq.com

I love Savannah too! Went there for the first time last Spring and definitely want to go back. The trolly rides downtown were so informative and gave us an idea of what houses to go back and tour. And of course, we ate at Lady & Sons (Paula Deen’s restaurant.)

I love Savannah. I discover something new with every visit.

Beautiful. Luxurious. I will want to go and experience this place as soon as possible. Your pictures, as usual, are fabulous. And making the place look like out of a fairy tale.

Your photography is so beautiful! A few of our friends studied in Savannah College of Art and Design. Have heard so many stories about this quirky, vibrant town.

What beauty you have captured. The words set the scene, then the images knocked it out of the ballpark!

I just love that inverted stained glass ceiling in the old pharmacy!

I lived in Savannah for a few years and while I didn’t enjoy it then (too hot and humid and WAY too many bugs for me) I do miss it sometimes! It is nice to see it from the point of view of a tourist. Other great places are Moon River Brewery (for a pecan praline cocktail. Yum!), Mata Hari’s (a speakeasy and you need a special key to enter), and a day trip to Jekyll Island which is incredibly beautiful – loved riding my bike around there!. Thanks for sharing! | http://ourpassportpages.com/

Thanks for the recommendations. I’ve heard summertime is blazing hot.

Wow Savannah looks so charming! I haven’t been to there since I was a child but I’d love to visit. I would definitely make a trek to Gryphon! Looks so cool.

Cool. Thanks for reading, Jenn!

Sam | Away She Went

I would love to visit Savannah someday. I love the architecture around the city and the Spanish moss is so picturesque!

I hope you get to visit Savannah too, Sam!

Such a cute concept! Gotta get the most of your money and challenge those styling skills. I really like how you kept both outfits fairly simple and easy to wear anywhere. That leather jacket is to die for, and I’m always down to wear sneakers. Although, I’ve been nervous to wear midi skirts mainly because of my height. I have made is my new years resolution to try things I’m scared about though, and thanks for showing that wearing a midi skirt isn’t too scary haha.