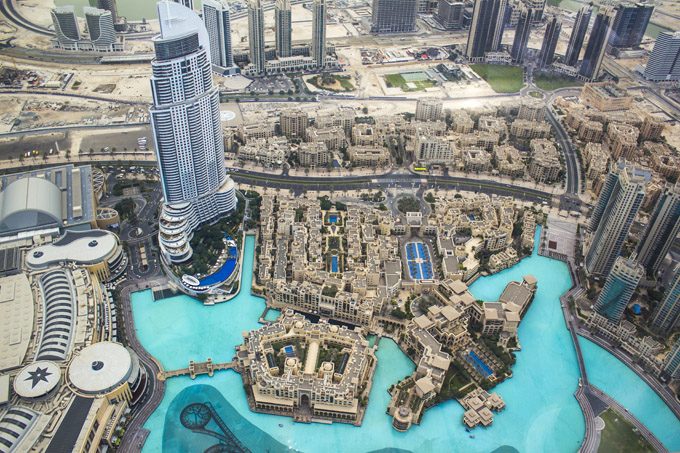 If you love architecture, you’ll love Dubai. Riding the metro through the heart of the city feels a bit like being on the set of “Star Wars” (that is, if it wasn’t all CG). It was unreal. As you can see, the construction has a global feel with a dash of Big Ben, Chrysler Building, a taco (okay, that’s probably supposed to be a boat), and even dolphin- and candy bar-shaped buildings.

This steel metropolis juts up from the flat, dusty landscape like a mirage in the desert. That spire in the background (see below) is the Burj Khalifa, clocking in at 2,716 feet and 160 stories.

•  Tallest building in the world

•  Tallest free-standing structure in the world

•  Highest number of stories in the world

•  Highest occupied floor in the world

•  Elevator with the longest travel distance in the world

•  Tallest service elevator in the world

View from the top

At the observation deck on level 124

Incomplete and completely audacious — I give you “The World” islands. Shaped like the continents, each island in this artificial archipelago is a “country” for sale. Apparently, only Lebanon Island has a structure on it.

The spindly ziggurat in the background is the Burj Khalifa again.

The soon-to-be-opened JW Marriott Marquis is a pretty flower shape and, not surprisingly, the tallest hotel in the world.

Emiratis are borderline, if not overtly, reverential of their sheiks. And why shouldn’t they be? Dubai is completely tax-free — no sales or income tax!

Pretty sure this building breaks the world record for greatest degree of twist on a building. Not kidding.

This is the sheik of Dubai’s hotel, the Burj al Arab. You can’t even get in the door without reservations for cocktails, which will set you back at least $100 pp. Afternoon tea is more. And yes, that is a helipad. Notice the “sailboat” surfing the “wave.”

I kind of admire the audacity of the Emiratis. They’re like, “Yeah, we’re rich… and?” It’s a big reason why I wanted to see this fabled city for myself. But instead of just oppressing and abusing their subjects, the sheiks had a vision of a multi-national city, a global marketplace with cutting edge architecture and technology that not only entertains the rich, but welcomes the middle class, entrepreneurs, and people who want to build stuff that breaks world records. (The world’s largest airport is coming up.) I can’t say what life is like for the poor, but I do know that 79% of the population of the UAE is made up of immigrants and they’re not going anywhere.