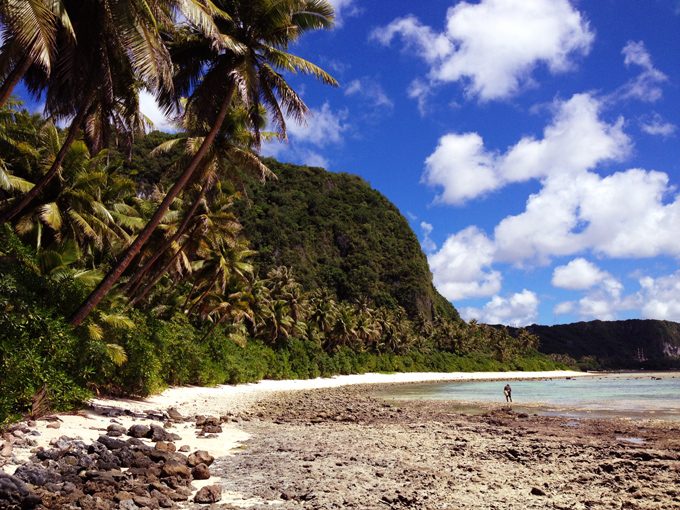 The trek to Shark’s Cove, a secluded Guam beach, feels a lot like being a castaway. My wild imagination had me calculating survival techniques and glancing nervously at my diminishing cell battery. (Times like these I thank God I married a MacGyver type.)

This secluded beach is not only uninhabited, but rarely visited. In fact, besides a few fishermen we passed on the way, the entire beach was ours. This is what I love about living on Guam.

The hike starts at Tanguisson Beach Park — my favorite beach on Guam for its sheer Seuss-like architecture. Mushroom-shaped lava plumes define this rugged beach, which is frequented by only a handful of people at a time and sometimes no one at all. The tide was out — way out — exposing the jagged, protective reef. The journey to Shark’s Cove is a winding stretch up the western side of the 32-mile-long island. The verdant cliff line is lined with swaying palms and the beach is animated with tiny hermit crabs scurrying from hole to hole to escape our menacing footsteps. There are no houses, no people, no monkeys, and very few birds. The sound of crashing waves was even absent.

Shark’s Cove was our destination on this hot afternoon for one reason: snorkeling. Despite the name, I have never seen a shark here (or anywhere on Guam, though they are abundant in these waters). Having snorkeled with black tip reef sharks in Palau, I hope that I’d remain calm assertive, Cesar Milan style if I encountered one. What I did encounter was well worth the 25-minute beach trek through jungle and sand: a coral reef teeming with colorful tropical fish.

Before I moved to Guam, I had never snorkeled so it still feels incredibly adventurous to me. The tide was so far out and the water so shallow, I had to inhale at certain passes to avoid scraping my undersides on the sharp coral. I snorkeled until my neck hurt, enraptured with the variety of life at my fingertips. Being underwater is both soothing and exhilerating — the crackle of the water, like an electric current, the scrape, scrape, scrape of fish nibbling on the coral, and the anticipation of seeing a shark are like no land activity.

As I floated in the clear, turquoise bay looking up at the imposing cliff, I was struck with the sheer exoticness of this place. This is exactly the kind of destination people search for and I live here. I live here.

All photos taken with my iPhone 5.

Thank you for sharing can’t wait to visit this beach. I am a new resident of Guam have only been here for seven months and I am looking for adventures and things to do on Guam. I will be taking a staycation here on Guam becasue my trip to the Philippines had to be canceled because of the super typhoon. I feel so bad for all the people in the Philippines : (

Well Guam is never a place that has appeared on my travel radar, but now I have looked it up and am thinking about how I can fit it in.
Your photos really capture the essence of the place and it looks very secluded (maybe it wasn’t and you just waited for hoards of people to get out of the way before you took the pics, but I suspect not).
You seem to have lived a very interesting life and I will come back to the site when I have more time and have a better look around 🙂

A secluded beach has always been my favorite and it’s so awesome that you live there!

Gorgeous black photos and it looks so romantic and fascinating at the same time. The trek sounds wonderful and I’m sure when the end result is so pretty it makes it all the more special. Your snorkelling experience reads really well. Loved how well you described everything.

Nice to look at those tropical photos on a freezing UK winter evening. Definitely a good place to relax and unwind. Trekking with the sun in your face and the wind in your hair makes the adventure worthwhile and priceless.

I love going to places that I really do feel like a cast away. This beach looks absolutely stunning. It reminds me of a beach I visited in Vietnam which was so secluded and isolated.
I haven’t really thought about visiting Guam but now it is on my list. Thank you 🙂

What a beautiful place and I totally get the Castaway vibe! It’s so nice to be totally away from everything and to have the clear waters and beautiful surrounds to yourself. I love the mushroom-shaped outcrops too! If I was going to play castaway, I’d hope that I’d have a McGyver type with me too!

Uninhabited coves and islands sometimes tell the best stories as they are secluded without anyone in your way. The photos are hauntingly beautiful making Guam just seem like such a beautiful place off many a radar. I could see myself yelling “Wilson” here 🙂

Ha ha. Yes, you could yell “Wilson” and no one would know!

I love this remote beach and your photos look really stunning (especially the black and white ones)! I can’t stand crowded beaches so Guam should be a great option 🙂

It’s incredible that this beautiful part of Guam is so secluded – how nice to be able to have the place to yourself. And oh my goodness, the snorkelling sounds so good!! I would be afraid to see sharks (given this place’s name) but amazing that not one is in site. But what an awesome experience you had in Palau snorkelling with sharks.

Hi Soraya. Fortunately, reef sharks in this area aren’t too big, but yes, you gotta be careful.