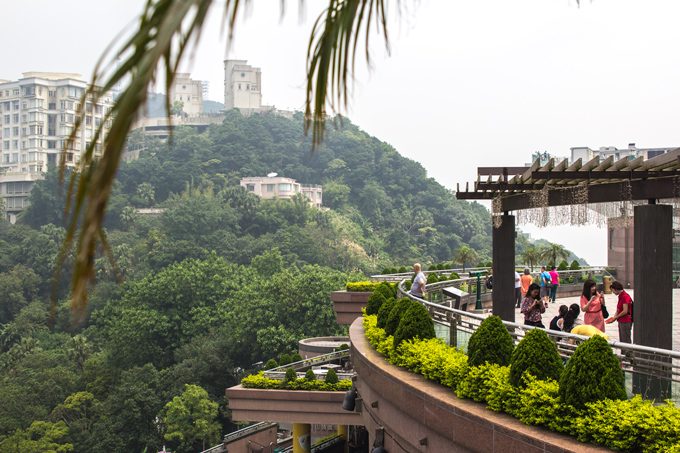 Hong Kong is a city that continues to reinvent itself. Literally. What they say about weather — if you don’t like the weather, wait a minute — applies to the Hong Kong skyline, and even more so to its harbor. With 7.1 million inhabitants and 55 million visitors per year, Hong Kong is busting at the seams. You’d think there’s nowhere to go but up, but you’d be wrong. There’s always out. Out into the water, that is. It’s called “reclaiming land,” which implies that it is the oceans that are imposing on Hong Kong, not the people.

Fifty-five million visitors a year translates to an extra 4.58 million on the streets — and most impactingly, in the stores — per month. Residents lament the consequences of this draw, citing a run on baby formula, diapers, and the like by mainland Chinese shoppers afraid to purchase the goods at home, due to scandal, health scares, or fear of getting fillers rather than the real deal.

With that being said, everyone should visit Hong Kong at least once. It’s a sensory busting experience at hyper speed so if you’re from a small town, you’re probably do for 5 days or so of this exact kind of stimulation.

Case in point is the rural fishing village of Tai O. A short bus ride from the Big Buddha, this village is home to some of the merely 2,000 fishermen still working in Hong Kong. As in many places, youth seek the sophistication, education, and job opportunities of the city over the back breaking labor of their forefathers. And we could see why as we boarded a speed boat to survey the tiny inlet of houses-cum-docks at Tai O. Wooden shacks supported by barnacle covered stilts varied only in degree of color and decay. The channel wide enough for only two passing boats, it felt a little exploitive to look straight through the homes, where the owners had nowhere to hide. Lined with speed boats and pastel wooden fishing vessels, the inlet was presided over by the green peaks of Lantau Island. Cats perched on the junk-lined shore. Dried fish parts of every variety — including the stomach lining — were set up for sale in stalls along the way. With this much tourism, where is all the money going? Obviously, not here.

Our boat headed out to the China Sea just a quarter mile off the shore in hopes of spotting the elusive Chinese white dolphin. Within minutes a pink fin appeared! See, the white dolphin turns pink as an adult, making it all the more mythical. Passengers erupted with glee as the curious creatures exposed their fins and even their noses just yards from the boat. Awesome.

Alas, it was time to return to shore for tea at the very Zen Tai O Heritage Hotel. The former police station oozed European romance, and indeed there was a young and bright eyed Chinese couple being photographed at the place.

Hong Kong is not the kind of city you visit without an agenda. Even if that agenda is as simple as sightseeing and shopping, you need a reference point to navigate the bustling city streets and crowded alleys. Fortunately, Hong Kong’s metro (MRT) is one of the best and cheapest in the world. Just purchase an Octopus card for multi-rides and map out your destination before you get packed like sardines into a subway car in this cosmopolitan city of 7 million. Hollywood Road was the second road to be built when the colony of Hong Kong was founded. Constructed in early 1844, existed before the infamous California town became a celebrity haunt. Hollywood Road is home to antique shops and a thriving arts district. Stop in the Man Mo Temple to admire an atmospheric blend of incense and architecture filled with faithful Buddhists at prayer. This marine park focuses on conservation and entertainment with daily shows and plenty of rides. The park contains a variety of land and marine animals from Artic to Asian. See the giant panda and the red panda, which has an estimated population of less than 10,000 in the wild. Penguins, artic foxes, and pacific walruses can be seen along with spotted seals, sea lions, and of course, dolphins, who dazzle during Ocean Theatre shows. When it comes time to eat, head to Neptune’s Restaurant where you can watch 5,000 fish circle the Grand Aquarium’s main tank. This popular site offers sweeping views of Victoria Harbour from the highest point on Hong Kong Island. The Peak Tram has been operating since 1888 and offers visitors a step back in time and a fun way to get to the top. There are shops, restaurants, pavilions, and of course, viewing platforms at the top. Hong Kong is notoriously foggy, so evaluate the weather to decide if you want to venture up during daylight or at night when the Harbour truly sparkles. This uber chic eatery oozes charm and serves up elegant dim sum. From the crystal chandeliers to stained glass windows and loft finishes, it’s nearly impossible to believe this is a former wet market. The Grand Stage Western Market, according to its website, it is the oldest market building surviving in Hong Kong. The Edwardian-style market was refurbished and renamed in 2003. Whether your destination is the Big Buddha or you just want to take in the fog-laden scenery, riding in a glass gondola is a spectacular visual treat. The cable car links rural Ngong Ping with urban Tung Chung. Pay extra to ride in the glass-bottom ‘crystal’ cabin to see fishermen waist-deep in the bay as you cross. Book on the Ngong Ping 360 website to get 10% off. Enter to win a travel package! The Tian Tan Buddha is the world’s largest outdoor bronze Buddha and is surrounded by acres of landscaped walkways, temples, and picturesque arches and statues. There are also shops and restaurants to catch your breath if you were adventurous enough to climb the 268 steps to get the statue. The Buddha is best reached via the Ngong Ping 360 Cable Car. View the Big Buddha website. A short bus ride from the Big Buddha, this village is home to some of the merely 2,000 fishermen still working in Hong Kong. As in many places, youth seek the sophistication, education, and job opportunities of the city over the back breaking labor of their forefathers. Visitors can board a speed boat to survey the tiny inlet of houses-cum-docks at Tai O. Wooden shacks supported by barnacle covered stilts varied only in degree of color and decay. Lined with speed boats and pastel wooden fishing vessels, the inlet is presided over by the green peaks of Lantau Island.

The highlight of speeding through this village is the search for the elusive but curious Chinese White Dolphin, which is actually pink! The world’s largest permanent laser show is projected from atop 40 skyscrapers. The laser show may not be the most modern (Singapore gets the prize for that), but watching the colorful wooden boats ply Victoria Harbour is a unique sight too. Avenue of the Stars is one of the best vantage points for viewing the nightly Symphony of Lights laser show. Get there well before 8 p.m. to secure a front row view on the crowded avenue. Move farther down the Tsim Sha Tsui Promenade to avoid maudlin karaoke-style musical performances pre-show. Visit the Symphony of Lights website. For a panoramic view of one of the world’s most famous skylines, hop on board the Star Ferry. Transversing the Victoria Harbour in 15 minutes, it’s the best way to take in both the dramatic mountains and the skyscrapers lining the Kowloon and Hong Kong islands. And for only $2.50, you might as well ride the Ferry a couple times to give your aching feet a respite from all the pavement pounding. For a truly dramatic vista, catch the Ferry during the nightly Symphony of Lights laser show at 8 p.m. Be aware that there is a more expensive harbour tour sold at the ticket office just below the entry to the Star Ferry. Continue up the stairs past this booth to purchase the less expensive, shorter ferry ride. Visit the Star Ferry website. No visit to Hong Kong is complete without shopping and Hong Kong food markets are some of the most unique in the world. Oddities (at least to Westerners) abound — from exotic fruits to strange dried seafood, so a stroll through the market is at the least a photo opp. Many markets open as early as 5 a.m., and are also a great place to pick up a hot, fried lunch on-the-go. Don’t be afraid to haggle! For souvenirs, electronics, and apparel, head to Nathan and Temple Streets, which are open late. Vendors lower their prices just before closing, so don’t be shy to offer half price for tchotchkes, toys, luggage, cell phone accessories, and more.

Hong Kong is phenomena and historical exceptional city in the recent world where there are a lot of amusing place,exciting hill or reclaiming water, conventional foods and exceptional custom for visiting. So in here, every year comes to many inhabitants and visitors for take to more experience. Thanks for sharing.