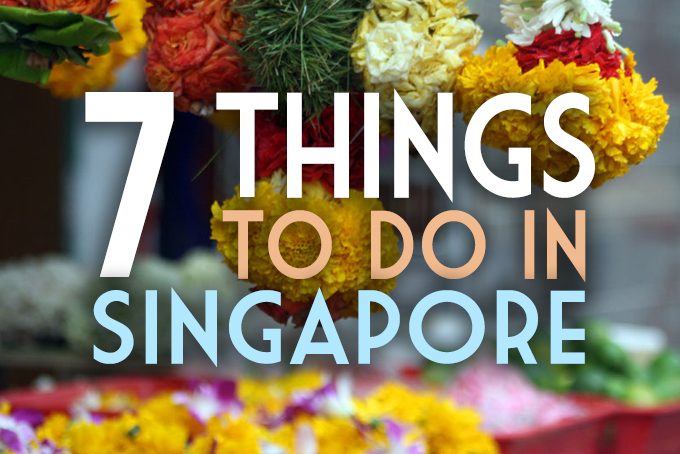 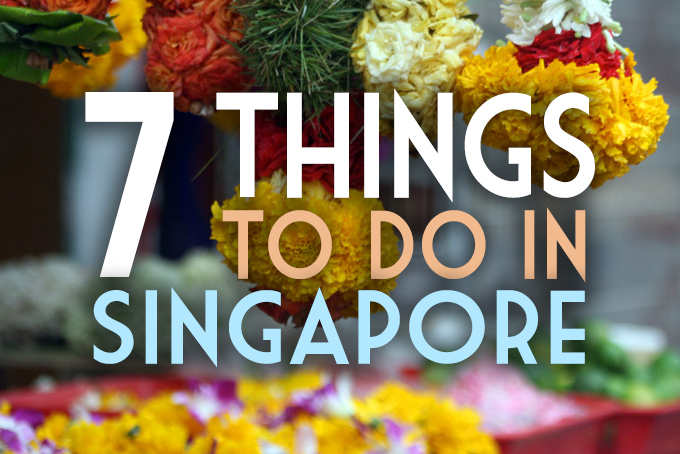 Singapore is a first-class choice for travelers seeking exciting culture, food and shopping. In fact, this city-state island has so much to offer, you will barely scrape the surface in a five-day trip. Singapore has risen to become one of the world’s most technologically and economically advanced locations in the world. It’s a great place to wander and is a true walking city. The cheap and easy MRT (Mass Rapid Transit) system connects all the top destinations through a series of clean underground trains. Eating and drinking in the subway is punishable with a $500 fine, which is a key reason Singapore is so clean.

Some have complained that Singapore is just too sanitized and lacks the charm of its former self. However, the compact neighborhoods of Little India, the Arab Quarter and Chinatown offer an authentic cultural experience. Little India is by far the most bona fide of the bunch. Little India is a sensory assault, from the heady aroma of floral garlands hanging from sidewalk stalls to the smell of rich, delicious curry that seems to permeate every nook and cranny. Brightly colored dresses adorn doorways of shops offering everything from sparkly bracelets to stacks of electronics. The streets of Little India never sleep. They are usually lined with men — some young, some old and some rolling compact black suitcases down the narrow streets. Sometimes men are gathered on the sidewalk at an electronics store watching soccer in the dark. And yet the streets aren’t threatening; it’s a major part of Singapore’s charm — 5 million inhabitants, and yet crime, disease, even trash are not problems.

Westerners will enjoy the novelty of eating at Banana Leaf Apolo in Little India Arcade, where, yes, food is served on a banana leaf and eaten sans utensils. Rice is piled on the leaf and curried meat served in a common pot. The curry is drizzled on top, then rolled into balls and devoured. Wet naps come in handy throughout the trip. Restaurants in Little India come in all varieties and are designated by their cuisine — Northern Indian, Southern Indian, or vegetarian. Gokul Vegetarian Restaurant offers a wide range of curries, soups, birayni — concocted with a convincing soy component that won’t have you missing actual meat.

Singapore is known for its hawker markets offering fast and delicious food from stalls no bigger than a walk-in closet. They are clustered on the bottom of the busy Tekka Market in Little India. Pictures of unfamiliar foods line the top of each stall, so be brave and pick something that looks appetizing such as mee goring, one of Singapore’s national dishes. Sample bubur-cha-cha, a traditional Malay dessert with yam, sweet potato, tapioca flour and coconut milk. It is surprisingly delicious. You can get the most of Singapore’s food scene with a local by your side. The Arab Quarter is a tidy section of streets devoted to trendy boutiques and Persian food. In a place where drug trafficking is punishable by death, it’s surprising to see the ever-present hookah proudly on display on all the café tables. Go in for a falafel sandwich with baba ganoush and ask to be seated away from the tokers sprawled out on Persian carpets upstairs. You can even get great Mexican food at Piedra Negra, a colorful corner bar whose selections include excellent mojitos and fish tacos. You can’t miss the vibrant wall mural on two sides of the exterior.

With its trendy and hip disposition, Arab Quarter eats are more expensive than Chinatown or Little India. In fact, food in Singapore is quite cheap, compared to U.S. prices. A visit to the lion city wouldn’t be complete without a day (or two) at the world-class Singapore Zoo. Lions, tigers and bears are just a few of the animals on display sans cages at this forward-thinking zoo. In a rare instance, you can even connect with ring-tailed lemurs, fruit bats and other critters let on the loose in a giant terrarium known as the Fragile Forest. Check the map for feeding times and watch giant white tigers bob for chicken meat. The Singapore Zoo rivals the best in the world for getting up close and personal with nature. A feisty macaque may even swing overhead as you tour Primate World, which has seven varieties of the clever climbers. Chinatown is where East meets West. It is largely a sanitized, if old, financial district. A large tourist shopping area is located just off the Chinatown stop on the MRT. If you’re in the market for tchochkes, this is the place to pick up fans, umbrellas, jewelry, clothes and knock- off perfume. Singapore is largely comprised of ethnic Chinese who began migrating in the late 1800’s. The Chinatown Heritage Museum is one of Singapore’s best and offers a vivid glimpse into the lives of early settlers. The multi-floor museum is located in an old house and provides an ambient cultural experience. The museum illustrates the history of Chinese immigrants from their humble dwellings to their struggle with disease and slaughter at the hands of cruel Japanese soldiers during World War II.

Half of the museum is an authentic recreation of a shophouse. You descend into two basement levels of apartments so realistic, you almost feel a voyeur. In times past, businesses were run on the ground floor and families stayed on the floors above. There were as many as eight cubicles on each floor and tenants would share the kitchen, toilet and water facilities. It’s easy to feel like you are being transported into the past — as late as the 1950’s — when up to 10 people lived in 6-by- 5-foot cubicles. It’s no wonder prayers were offered at temples by immigrants thankful to have survived the perilous journey from China. Marina Bay Sands is Singapore’s latest and greatest skyline iconography. The Sands is a hotel, casino, mall and museum. Its SkyPark is one of the biggest attractions and for good reason. Where else can you find a park, pool and restaurants perched 57 stories in the air? Make reservations at Ku De Ta early in your planning and avoid the S$20 (about $15.60) tour fee to go to the top.

Even from the bottom floors, Marina Bay Sands has a plethora of activities from an opulent shopping mall to the newly opened Art & Science Museum. The Sands’ light show is a must-see at 8 p.m. and 9:30 p.m. every evening. The optical phenomenon is a treat for the senses and free to boot. Orchard Road is often called Singapore’s Champs-Élysées. It is shopping on steroids and a clear rival to New York’s Fifth Avenue. From H&M to Gucci – it’s all there. If you don’t care about luxury shopping, head to the top of Orchard Central, a vertigo-inducing shopping mall, where a panoramic view of the city awaits.

As you’re pounding the pavement of this shopping mecca, don’t miss the quaint Emerald Hill, a street that clings to the colonial past amidst the ultra-commercial Orchard Road malls. Emerald Hill is renowned for its terrace houses of “Chinese Baroque” architecture. The unique style is a blend of Chinese and neoclassical European designs, originating from Malacca in Malaysia. If you’re craving a little greenery (or in this case, a lot), head to the serene Botanic Gardens, admission to which is free. Singapore’s climate is similar to Guam’s, so bring an umbrella but don’t let a little rain keep you away – it’s even more gorgeous in the mist. Pay S$5 ($3.90) to enter the colorful National Orchid Garden. If you’re feeling just too steamy, head to the cool house, the only air conditioned section of the venue.

Love this list! I have to say that I haven’t been to most of what’s in the list (except maybe for the National Orchid Garden) and I have been to Singapore twice! Lol. I feel so behind now!

Love this list. People always tout Singapore as such a clean and boring place but I love it. I loved exploring Little India and the Zoo. Though you’re photos are so much better then mine

What a colorful and diverse city! I had no idea. Little India looks absolutely gorgeous and the food sounds great (of course). I would definiitely need to goto the botanic gardens — they are always one of my favorite spots anywhere I go. Love that they are free. This whole list makes me want to go to Singapore right now.

I have been to Singapore several times and I never new Little India existed. I guess it’s a 24 hour place because it gets so hot during the day, I’ll check out Little India on my next visit. The Mojitos and fish tacos are a little random for the Arab Quarter. I’ve only heard of good things about the zoo, great picture of the monkey, the baby is posing for the camera!

I have seen so many travel bloggers and vloggers go to Singapore over the last two years. I never considered it but have recently started to appreciate it as a great destination. However apart from the botanic gardens, I wasn’t sure what I would actually do in Singapore. You just answered that questionwa

I loved Singapore when I visited there. I spent quite a bit of time in China tower and loved going to eat in all the markets where the food was so good and so cheap. I never made it to the zoo or the botanical gardens but I did visit Marina Bay Sands and the Gardens by the Bay. I also saw the 2 light shows which were amazing 🙂

I loved Singapore when I was last there about four years ago. We did the night adventure at the zoo which was pretty cool. And yes yes yes to Orchard Rd! The Hubs dragged me (and my credits cards!) out of there as soon as he was able lol

Singapore has been on my list for some time – particularly to visit the hotel that lets you swim to the ledge. The idea of doing some shopping on Orchard road sounds really neat and I would be saving my pennies just to get a chance to explore. Little India looks like such a colourful replica of India itself! Great post to inspire me to head on over 🙂

You seem to have listed the best of Singapore, varied cultures, varied experiences and all a must visit for each traveller.