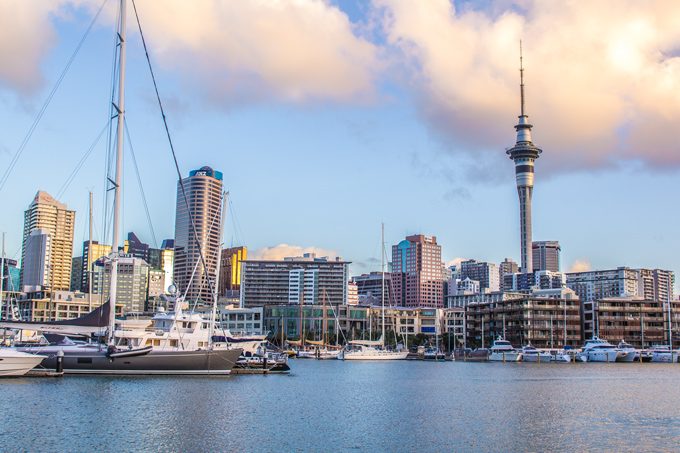 I guess the biggest compliment you can give a city is to start looking for an apartment there. It’s the equivalent to getting down on one knee (unless, of course, moving is your hobby, or divorce, but I digress…). I may or may not have been interested in a city center one-bedroom with more amenities than square footage. I also may or may not have been eyeing some editorial jobs online. Time will tell…

How was that for hype?

Let’s talk about something other than my insatiable wanderlust. Let’s talk about Auckland! Such a cool city. Truth be told, the hubs and I only spent one day in the city center, but it wasn’t for Auckland’s lack of charm. We simply had a crazy itinerary to keep. We needed to drive 1,600 miles in a campervan on the wrong side of the road to 6 cities across 2 islands in 8 days minus a working stereo (or a bath, for that matter) all without killing each other, and of course, in a leisurely manner because, Great Scott, this is a vacation! Boy, do I know how to plan ’em. I will eventually get to the nitty gritty of living in a van (down by the river), but lest I bury the lede any deeper…

We spent Day 2 of The Great New Zealand Campervan Caper in modern port city of Auckland. We had no agenda and didn’t need one. Strolling from café to café, pub to pub, and exploring the wharf one boat at a time made for a pleasant and picturesque day. We enjoyed cappuccino and gelato at Valentino’s Gelato, savory mussels with Mojitos and beer at The Occidental, and an awesome Margherita at Pizza Fresco, because what’s better than a pizza with a rocket salad on top?

As a photographer and city girl at heart, I eat up historical architecture. I found my new favorite street, the impossibly charming Vulcan Lane, home to The Occidental, a classic pub with beer that tastes like ice cream, but in a good way, so says the hubs. The hubs spent no little amount of time admiring sail boats and yachts at the wharf as we watched the sun go down. Auckland has a heady Seattle meets Barcelona vibe and I must admit it was love at first sight.

A yacht. With a helipad. And an actual helicopter.

No, this was not the name of our campervan

I know this is an older post but I am just so glad to see a positive post about Auckland! Pretty much every blog I’ve read berates my hometown saying it’s boring and ugly, so it’s nice to hear that someone liked it. If you ever go back try going to the suburbs or west coast beaches 🙂

Hi Zoe. Those people are stupid and don’t know what they’re talking about. Thanks for reading!

Paulina On the road

I love how you capture the essence of Auckland, New Zealand. I ve never been but the photos give a good impression. And OMG the mussels look to die for!!

Auckland is indeed a beautiful country. A cousin of mine moved there and can’t stop talking about how awesome the place is! I still haven’t been yet!
//Seattle meets Barcelona// – Whoa! That’s one heck of a description..

A good friend of mine is moving over to Hamilton, NZ soon and I’m planning to visit in November. My flight will have to be via Auckland and I’ve been wondering for days whether to spend some time there or just head straight to where I need to be. You’ve definitely helped me decide I need to spend at least a day there! It looks so wonderful, and is not somewhere you read about too often.

Auckland sounds like a really cool place. We also have a pub with ice cream flavoured beer in Stockholm and I love it. Great post and I love your pictures!

I have read good reviews about using a Campervan when exploring a new city or doing a road trip. I hope that I can visit New Zealand someday too. I’m a nature lover and I know that New Zealand has a lot of beautiful landscapes.

Beer that tastes like ice cream? That sounds too good to be true! How did the road trip go without a stereo, or did you end up playing music through your phone? Wonderful images as always, my favourite has to be the pizza and Peroni!

Beautiful place – love your photos! I love Auckland because it feels so light, airy and calm (for a city!). Beaches and beautiful parks are never far from the busy streets. Great suggestions for a prefect day trip.

New Zealand in general is such a stunning place. I love your pictures, it captures the capital beautifully. Do you know that they don’t have any snakes? My husband would love ice-cream that tastes like beer, I think that would be a dream for him 🙂

The food scene looks so awesome! I guess coffee in al fresco cafes and sampling food would be on the top of my list. And oh..the sea….I would love to go sailing too! Loved the pictures!