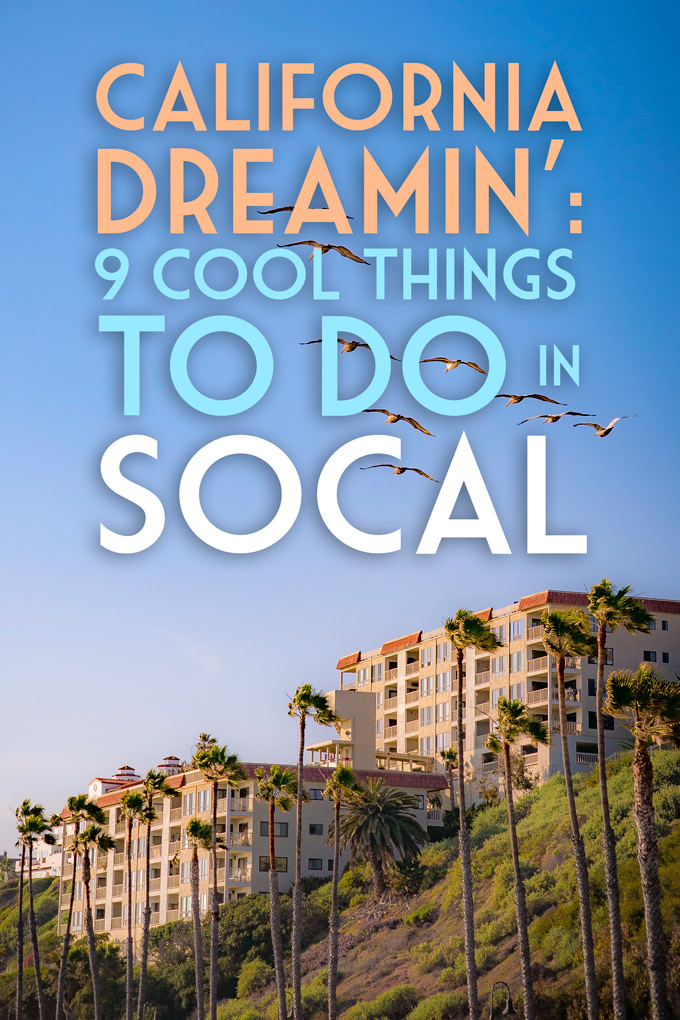 [slogan]As iconic as it is laid back, SoCal lives up to its beachy hype with glowing sands, breezy rooftop bars, and decadent seafood. [/slogan]

It was love at first sight when I visited in May. Read on for my beginner’s guide to southern California. 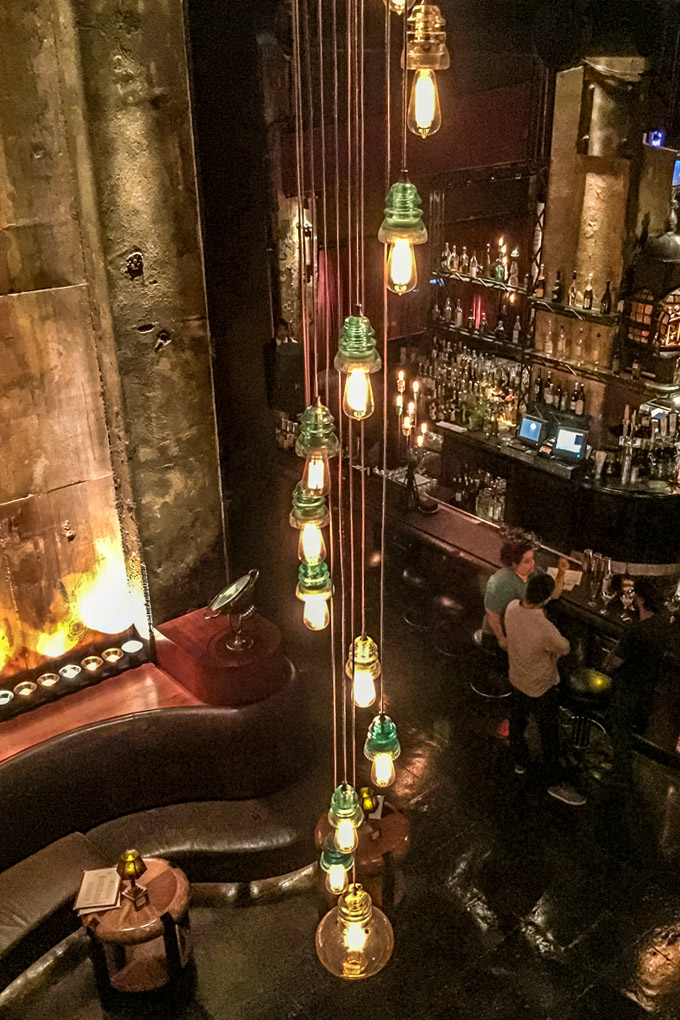 Unmarked entrances, bartenders with handlebar mustaches, and turn of the century decor — if you see all of the above, my friend, you have arrived at a speakeasy. As hipster as it gets, I’m actually a fan, not a detractor, of this new-old establishment. The mother of all speakeasies has got to be The Edison in DTLA. Built in 1910, The Edison has retained many of the architectural details of its past life as a bonafide power plant. The sub-basement lounge feels like the set of “Modern Times” meets “The Prestige.” Ghoulish silent movies are projected on a handful of walls in the cavernous space which has several private rooms with leather chairs and bric-a-brac from a hundred years ago. The lighting is low and the vibe is chill. It’s simply impossible to feel uncool once you’ve arrived. 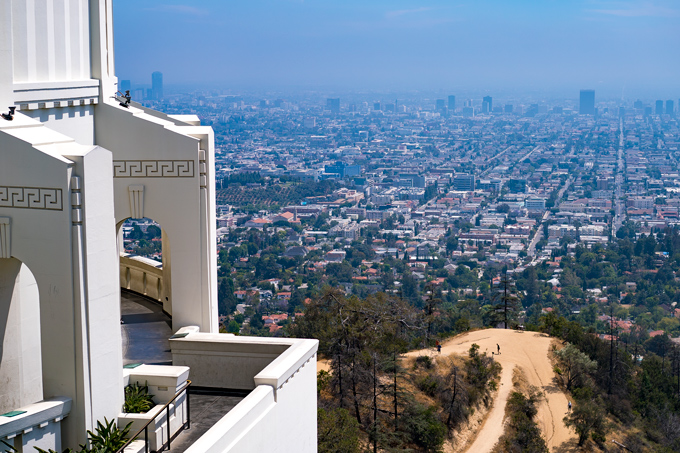 James Dean was here and that’s all I need to know. As the set of “Rebel Without a Cause,” the Griffith Observatory reeks of Hollywood charm, and yes, it’s the perfect place to see the Hollywood sign as well. Walking trails encircle the grounds below and the Observatory sits perched above L.A. in all its smoggy charm. It’s touristy without being a trap, especially for photographers. 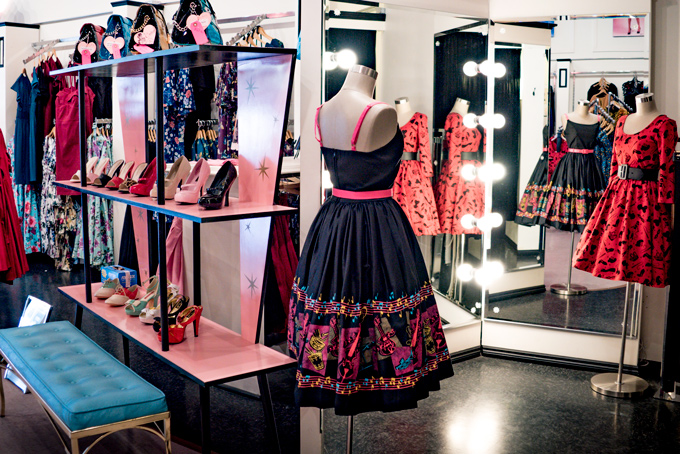 Pinup Girl Clothing has its one and only brick and mortar store here, so if Bettie Page is your idol, you’ll be in circle skirt heaven at this Burbank boutique. In the midst of all the major studios is Magnolia, a walking street chock full of vintage shops. Its proximity to the studios means the shops are overflowing with production wardrobes of every kind, all the costume jewelry you could ever hope for, and set pieces you never knew you needed.

Drinks at The Ace 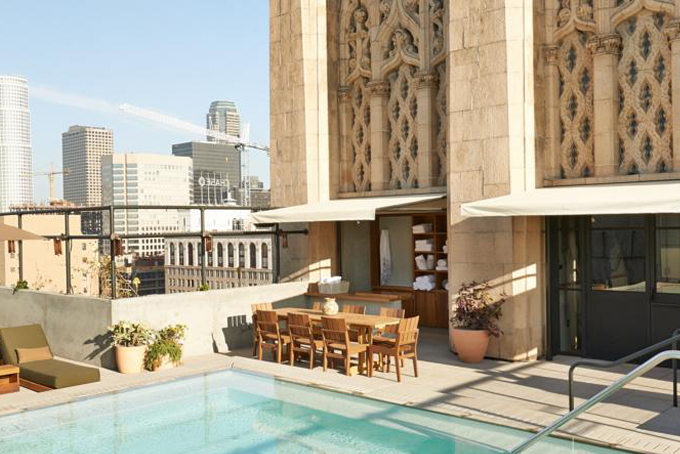 You may recognize the gothic architecture of The Ace from “Batman” (don’t ask me which one). The Upstairs Bar of this Art Deco hotel looks great day or night from the sunken pool to the neon lights of DTLA. Mingle with the beautiful people in this relaxed lounge while sipping a hipster cocktail. 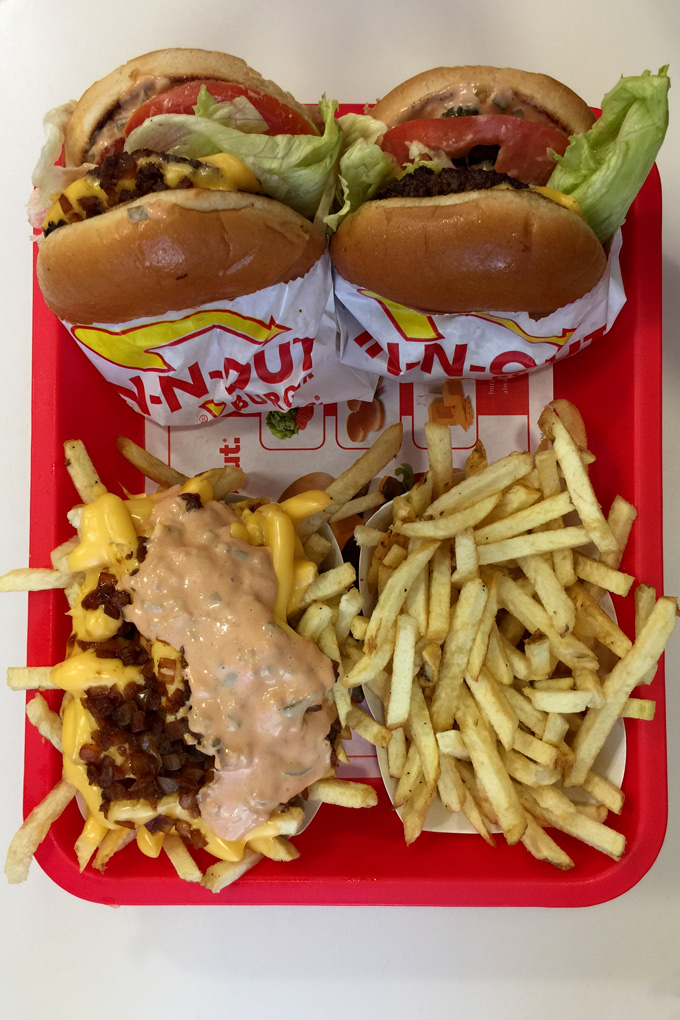 I swore off red meat more than a decade ago, but all bets are off at In-n-Out Burger. For my maiden trip to L.A. I asked my tour guide and friend to feed me something quintessentially Los Angeles, and a half-hour later I was deep in my Animal Style fries and burger, wondering how the bun could be so fresh, the patty so expertly grilled, and the lettuce and tomato so crisp… at a fast food joint. In-n-Out is a throwback to early diner days with its small menu which is cooked to order. It may not be as fast as Micky Dee’s, but it’s far fresher. 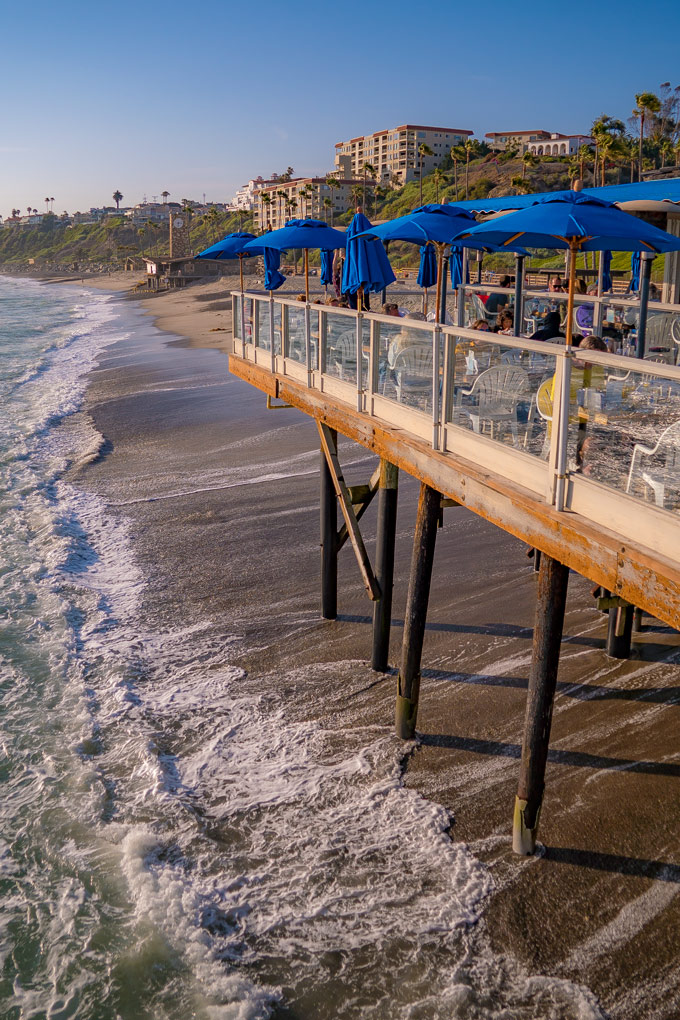 Mention San Clemente to anyone who’s been there and you’ll hear the same wistfulness about returning. I pictured SoCal as a hustling, bustling place, but not so in the towns that line the ocean between San Clemente and San Diego. Just alongside the beach is a running trail to knock the edge off that food guilt you’ll feel after devouring a hearty clam chowder on a chilly eve.

Cocktails at Sunset on Laguna Beach 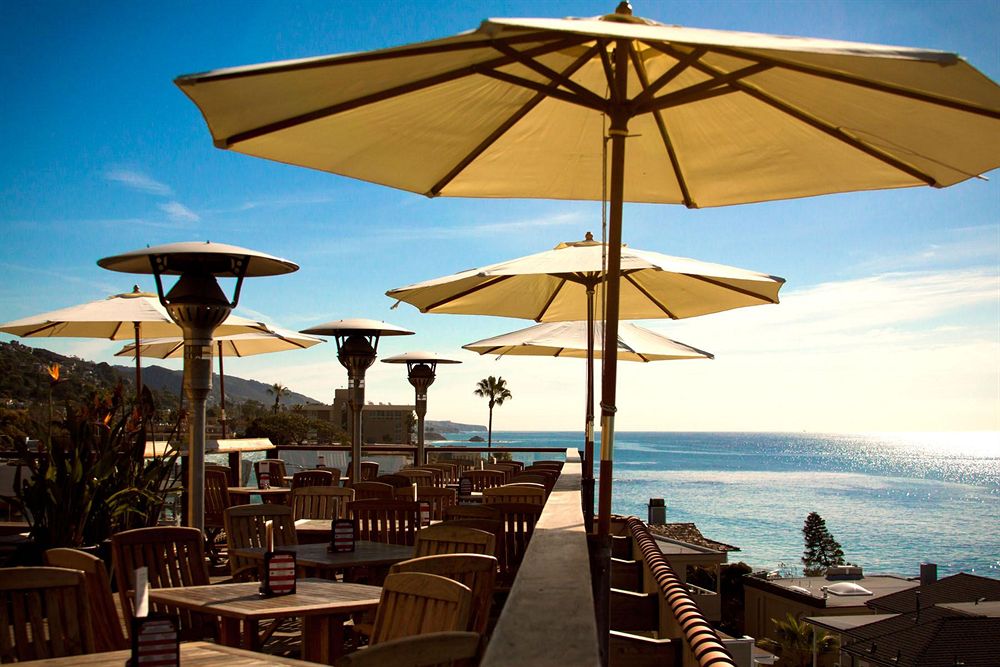 La Casa del Camino is the perch in Laguna Beach to giggle with girlfriends and sip cocktails at sunset. The apps are crazy good and the vibe is casual. You may even see a whale in the near-distance. 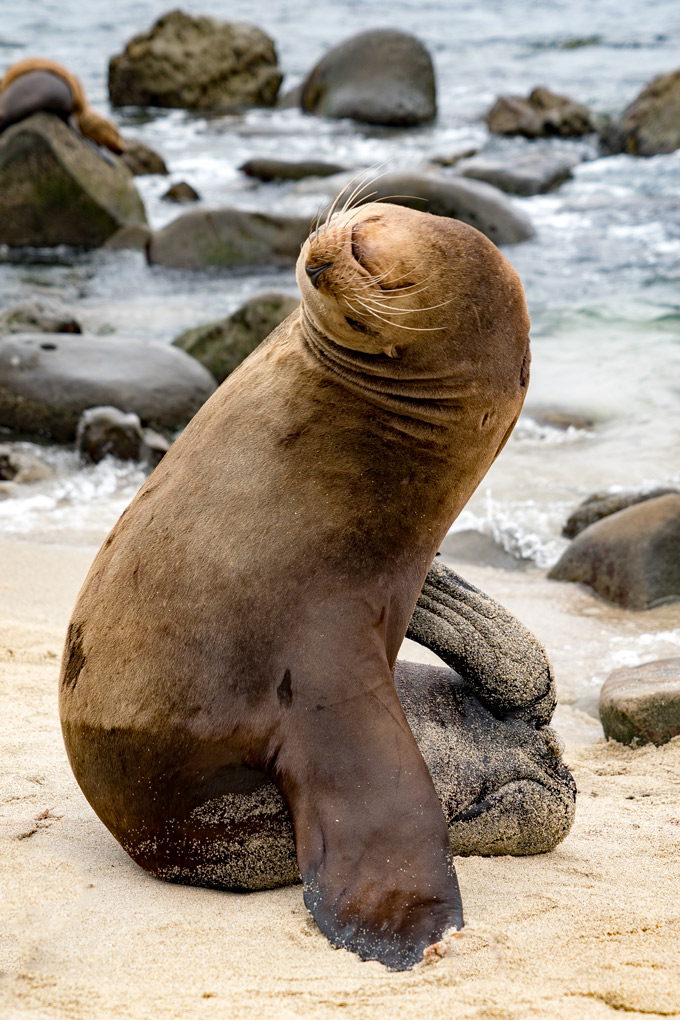 Just north of San Diego is a natural cove home to wild sea lions. A protected marine preserve, the sea lions flourish here and are perfectly relaxed even when selfied by eager tourists. Grab a seat on the outdoor porch at Brockton Villa Restaurant across the street and enjoy a lobster roll or two.

What’s your favorite spot in SoCal?

what about San Francisco? we have greaaaat things (and free things!) to do here! 🙂
I love the sea lions on La Jolla in SD. they are the cutest!

Agreed. SF is also great. This post was just about southern California but I hope to visit San Fran this year too. Recommendations?

oh yes! I have a bunch of places I can tell you to go! hahaha. But first do the usual sightseeing tour: Golden Gate, Alcatraz, Lombard St, Pier 39. You NEED to! It’s gorgeous.
If you have time go watch a baseball game on the AT&T park the view is AMAZING. I can help you with restaurants, coffee shops and unusual hotspots in the city. Just let me know when you’re here! 😀

Awesome. Thanks for the tips, Jade!

I’ve never bee to SoCal but I really want to for all the reasons you’ve provided. I’m a huge fan of pin up style clothing so I’d love to go shopping and pick up some Bettie Page dresses and skirts for the trip – we have some good stores in London but none as good as this!

You can shop Pinup Girl online too, but yeah, it’s pretty fun in person.

Great list! I’d add so much more. I live in Huntington Beach and there is so much to do around here!

Yes, the list could go on and on. I’ve only been to Huntington once, but I imagine it’s pretty fun to watch the surfers there.

Hey Jessica, I haven’t been to California yet. But your blog has added more stops to the bucket list page on my blog. I absolutely have to visit The Edison and soak in the speakeasy vibe. And La Jolla Vibe to watch to take selfies with the sea lions. Awesomeness. Thanks for posting.

Thanks so much, Abby!

I love the sea lion. He looks so friggen happy with himself! I’ve never been to Socal but I’d go just to see the sea lions.

They are cute, but keep your distance. Thanks for reading, Jean.

I went to UCLA and practically lived on In-N-Out Burgers. They are a Socal institution for sure. And those sea lions at La Jolla are just too cute. These are some fantastic tips for Socal.

Cool. Nice to get a thumbs up from someone who knows! Thanks.

I love the Getty Museum and best of all, it’s free to enter. I know In-N-Out has a cult following but I don’t get the appeal. We don’t have In-N-Out in the Seattle area and a lot of my friends are obsessed.

I’ve got the Getty Museum on my bucket list, hopefully this week!

Was it also in La Jolla cove where you can swim with leopard sharks? Would love to do that! Also, I’m not a hipster but I love speakeasies, too! Mostly because the ones I’ve been to make wicked cocktails! Aaaaannnd, in-n-out burger!!! you’re making ma crave for it! 🙁

Oh wow. I don’t know about swimming with sharks there, but I saw divers in the water. Thanks, Sarah.

The view from the Griffith Observatory is incredible! I would love to take photos from that spot. The bar of the Art Deco Hotel looks really neat too. I have a thing for places that offer spectacular views! My husband and his family always rave about In-N-Out Burger, so now I’m really curious. I want to try it! 🙂 Also, that sea lion in La Jolla is so cute! 🙂

Thanks for your comment, Nadine. There’s something addictive about that In-N-Out Burger, esp. for Californians!