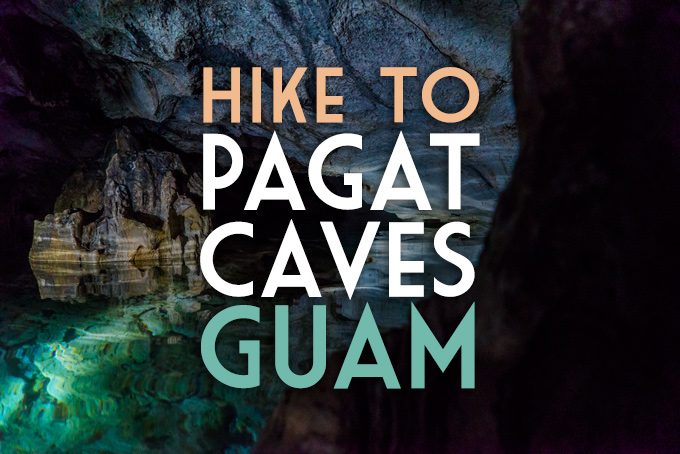 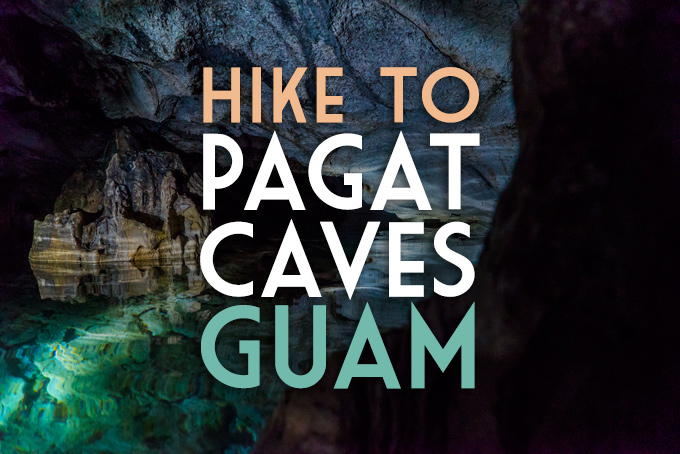 [slogan]This is my favorite part about living on a remote tropical island.[/slogan]

It’s no secret that I like to “escape” as often as possible (maybe because my day job involves a computer and I am so over being tied to a desk for more than an hour at a time). Last week a friend invited me to hike to Pagat Caves, a freshwater pool hidden deep in the jungle. I gladly took the afternoon off, nevermind that this is the hottest time of year and we were hiking during the hottest part of the day. After all, sweating is good for you.

We trekked through jungle canopies, razor coral, and more spider webs than I want to acknowledge. An hour later, we reached the sunken caves, where we shed sweat-drenched T-shirts and waded in with our flash lights high above our heads. I took my new baby — a Sony A7s mirrorless DSLR with 24-70mm lens — protecting her as I squeezed through narrow arteries until we reached the bowels of the Earth — Pagat Caves. The largest room was filled nearly shoulder-high with cold water.

I hadn’t been spelunking since I was in San Francisco more than a decade ago. Pagat Caves is, in a word, stunning. After I had gotten all my shots, I carefully handed the camera to my friend and went under the water. The cave was pitch-black but the water crystal clear with our three flash lights illuminating it all (hello, Sony A7s low-light performance!). What an experience. But it wasn’t over yet…

After prying ourselves out of the cool caves, we toweled off, then trekked a short while through the jungle. We passed a series of weather-beaten latte stones, used as foundations for ancient thatched houses. Grind stones lay beside them, an indication of a centuries-old village.

Ouch! I gasped as my foot lodged between two pieces of blade-like coral. Blood trickled down my ankle, but nothing was broken — the perils of filming while hiking. I was at the back of the pack, so I sped up to meet the group and emerged from the jungle at the breathtaking stone arch you see below.

[slogan]How had I lived here nearly six years and not seen this place yet?[/slogan]

Water surged in an out of the alcoves below and I realized I was standing way too close to a drop off, happily filming and snapping. I let the camera dangle around my neck inactive and hiked to the highest point of the lookout to watch the waves crashing on purple and green mossy rocks below. As the light changed, the ocean became four different shades of turquoise in alternating bands. I felt a bit panicky as I struggled with the age-old question: To see or to photograph? I took a moment to take in the view sans camera, then fussed with my A7s settings hoping not to screw up the perfect and fleeting light gifted to me just then.

Nothing awakens my senses more than days like this. I wish I had them more often, but then I wonder if they would be quite so special… 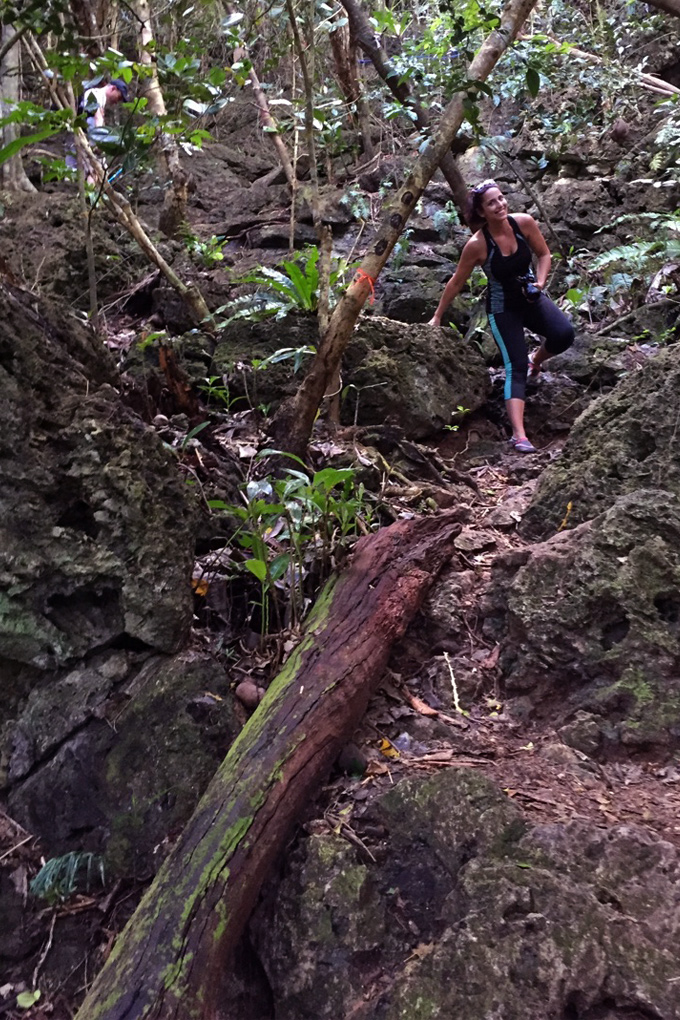 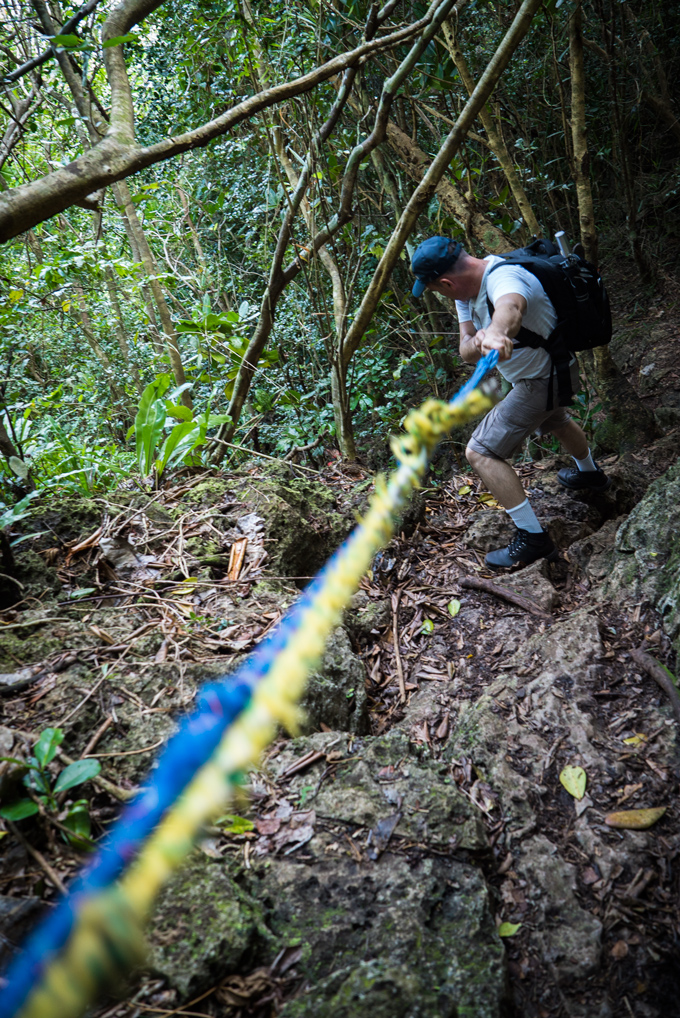 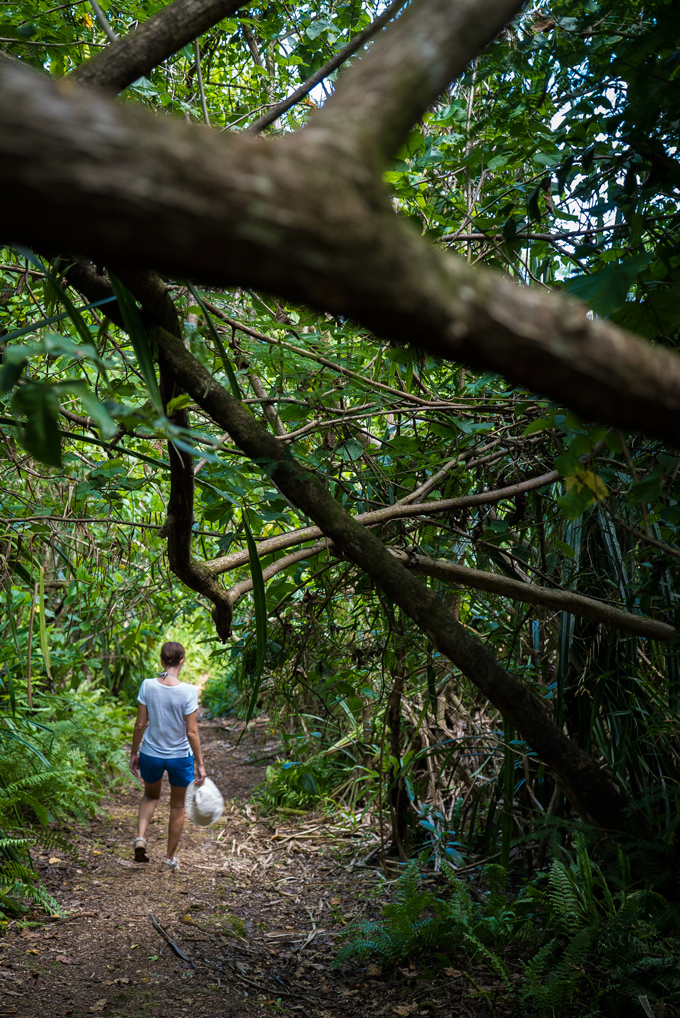 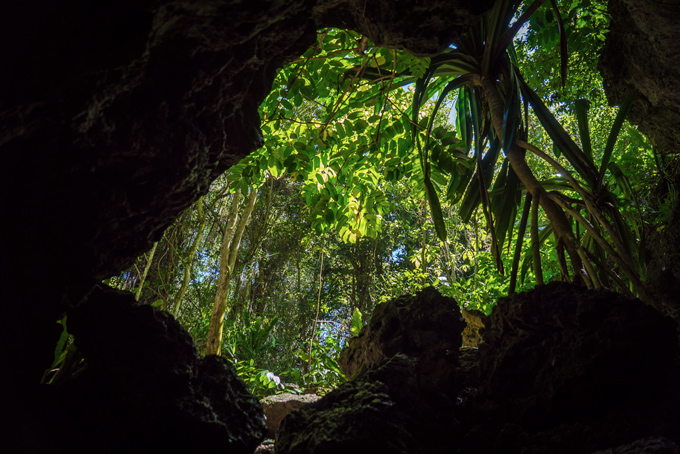 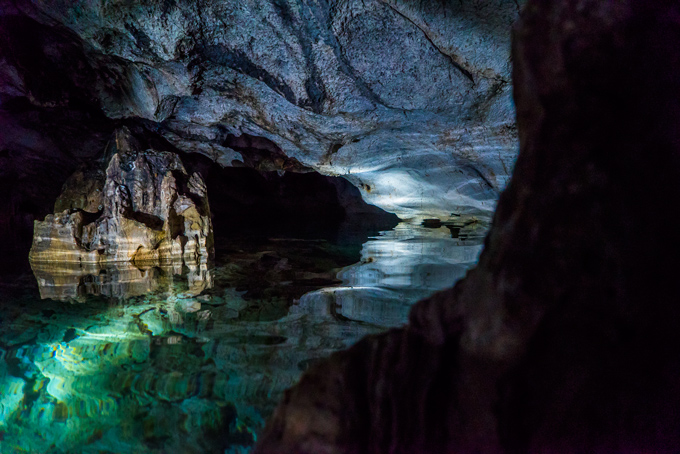 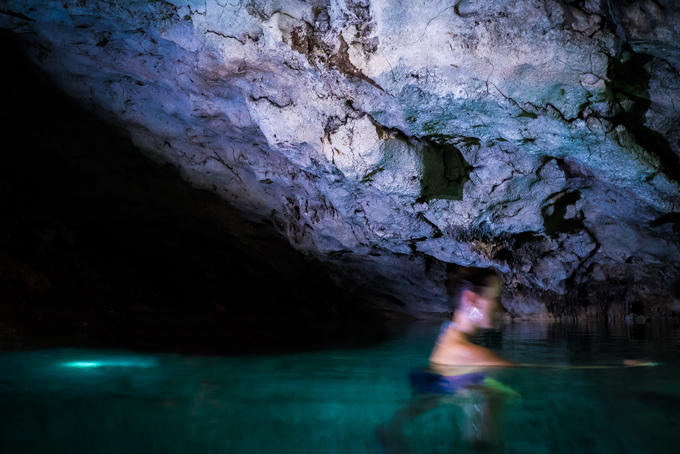 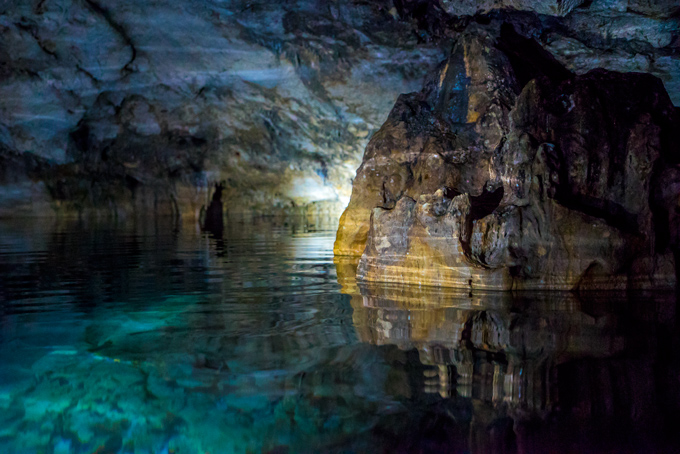 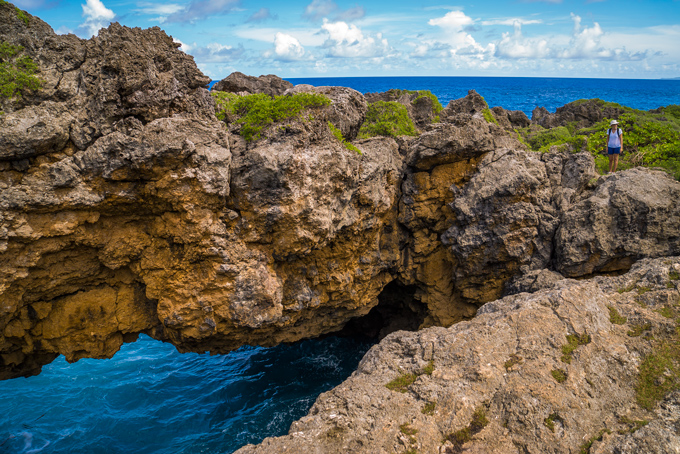 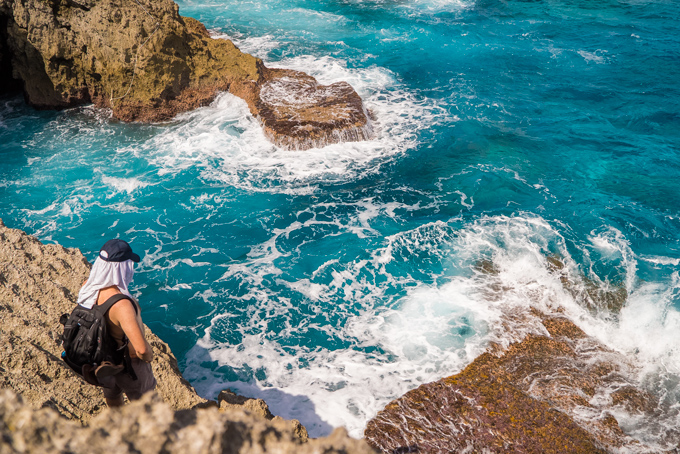 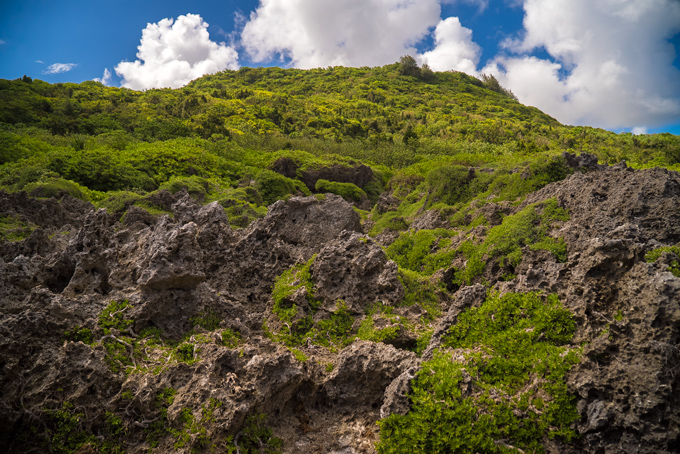 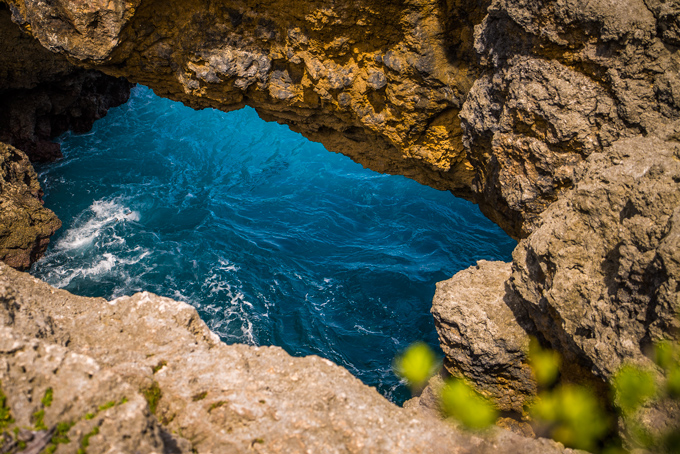 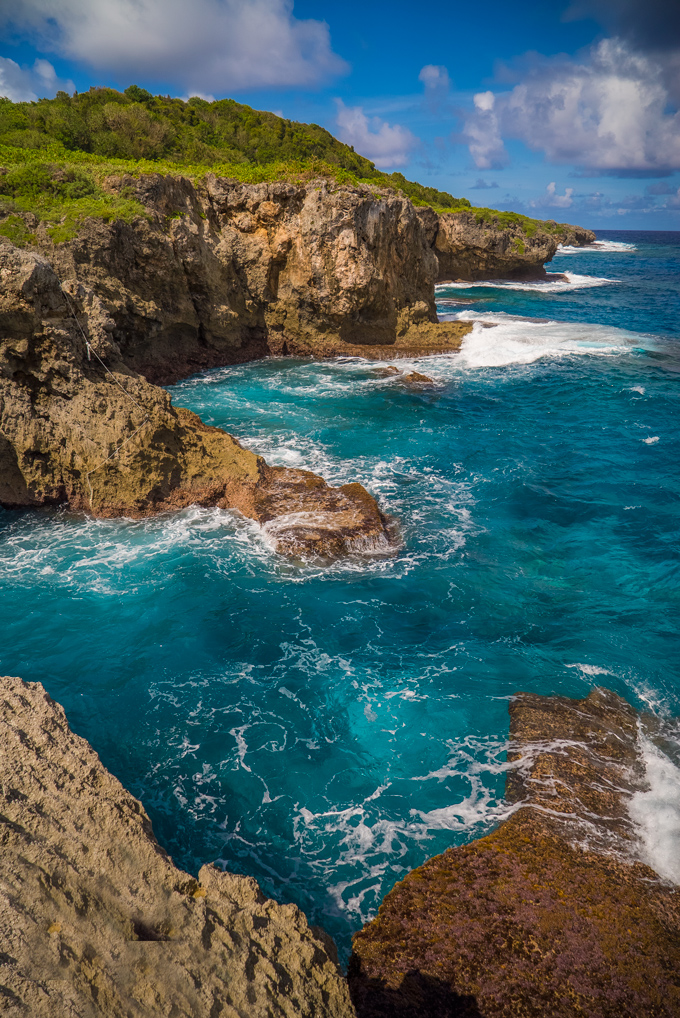 Have you ever been spelunking? Where?

Those caves look unreal. They’re amazing. I hope I can go cave-hiking one day!
xx, Pia

Those caves look amazing and surreal. Was it a hard hike? I have a tendency to not look where I am going when I am shooting too. That must have hurt.

Hi Soumya. The hike isn’t too hard if you’re fit, but it’s a lot of up and down and it’s hot in Guam!

These caves are amazing!!! I’d love to go swimming in there. We’ve been thinking about upgrading our NEX5R to the A7 for the longest time but can’t bring ourselves to dropping the dough haha, the quality is incredible!!!

Looks like a really strenguous hike but the views are worth it! Lovely

Wow, that must have been such an amazing experience. Those caves are spectacular. Your photos are great. You really captured the moment…makes me wanna go cave-hiking too 🙂

These photos are great. I too just bought a Sony mirrorless camera- A6000. LOVE IT!! These caves looked like a lot of fun to explore.

Your stunning photos make us want to go back to Guam. We’ve haven’t been in several years, and we didn’t see the Pagat caves when we did visit. Is there any safe place to do some cliff jumping?

Woah that looks like one amazing trek. The experience of hiking through the dense jungles to be finally rewarded with those stunning vistas of blue waters and the jagged cliffs is unbeatable. Glad you finally made to it after 6 years 😉

It seems you will have a great relationship with Sony, the photos are awesome! You make me think I need a new camera too… 🙂 I hope your leg is fine by now.

Hmm, maybe you’re right: I wonder too if you have so many days like this one all the time, then would it take away from them? I think they’d still be special! And if not, then that’ll just push you to do even more things that you don’t normally do, like caving!

Amazing caves and finally you tried your new camera too; Anyway while reading I felt a little bit “ignorance” about Guam Island, I have never heard about it!! I just looked on google maps its location, wow, congrats for your experience there!! Glad to follow you and thanks for sharing it, 😀