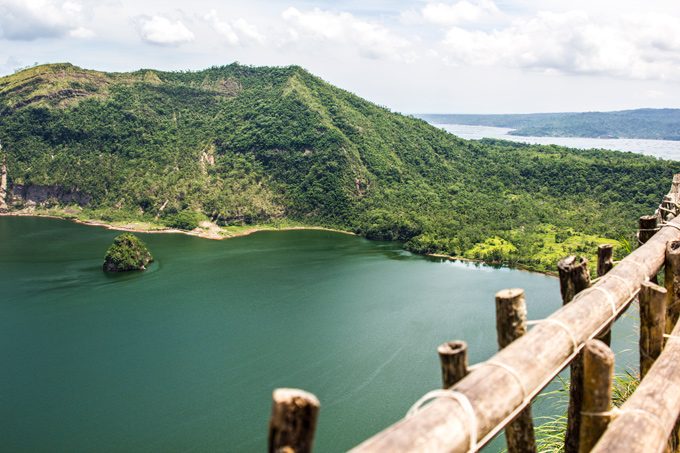 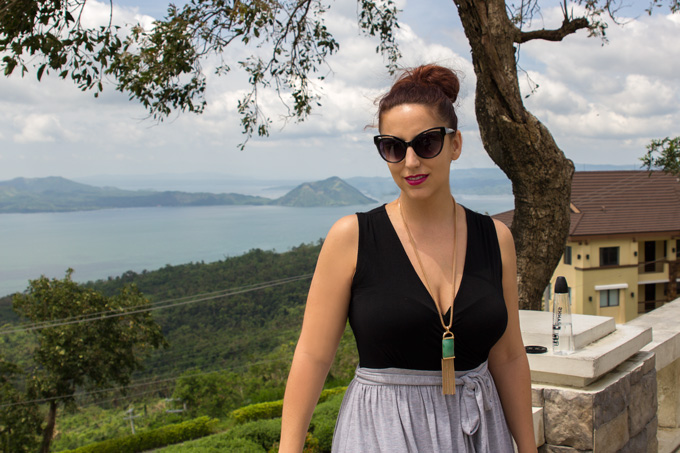 I wouldn’t say I’m an adrenaline junky, but I am increasingly addicted to adventure travel. I especially like to conquer things. Things like volcanoes. I traveled to the Philippines for medical care, not to climb a volcano, however, this tendency towards adventure made hiking to the world’s largest island within a lake on an island within a lake on an island an irresistible challenge.

Taal Volcano is the smallest active volcano in the world. Its unexplained shape and location on an island within a lake within an island makes it a unique geologic wonder. Taal caused one of the worst volcano disasters in history with an eruption in 1911 that killed 1,334 people and caused ash fall as far as Manila city. It sounded beautiful and dangerous all at once.

Our tour company, Great Sights, picked us up in Metro Manila and we drove nearly two hours through the city and countryside to get to the city of Tagaytay. I had no idea rural Philippines was so beautiful. What a contrast to the urban squalor and pollution of Manila, pictured below. 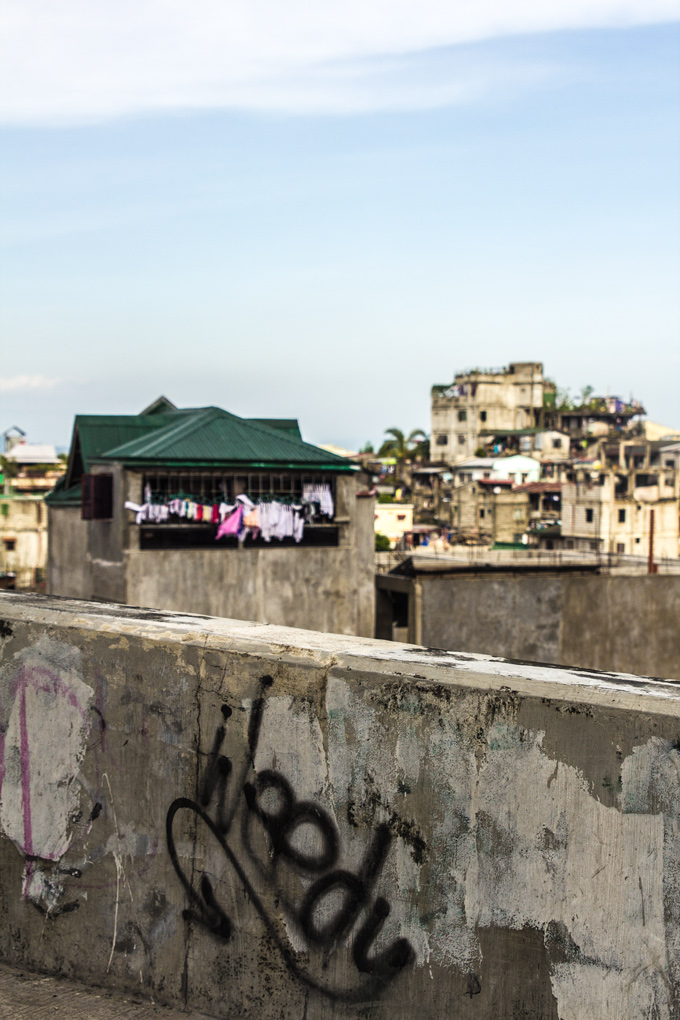 The two-lane road into Tagaytay was lined with furniture builders, fruit stands, and mechanics, to name a few. It reminded me of Ubud, Bali. 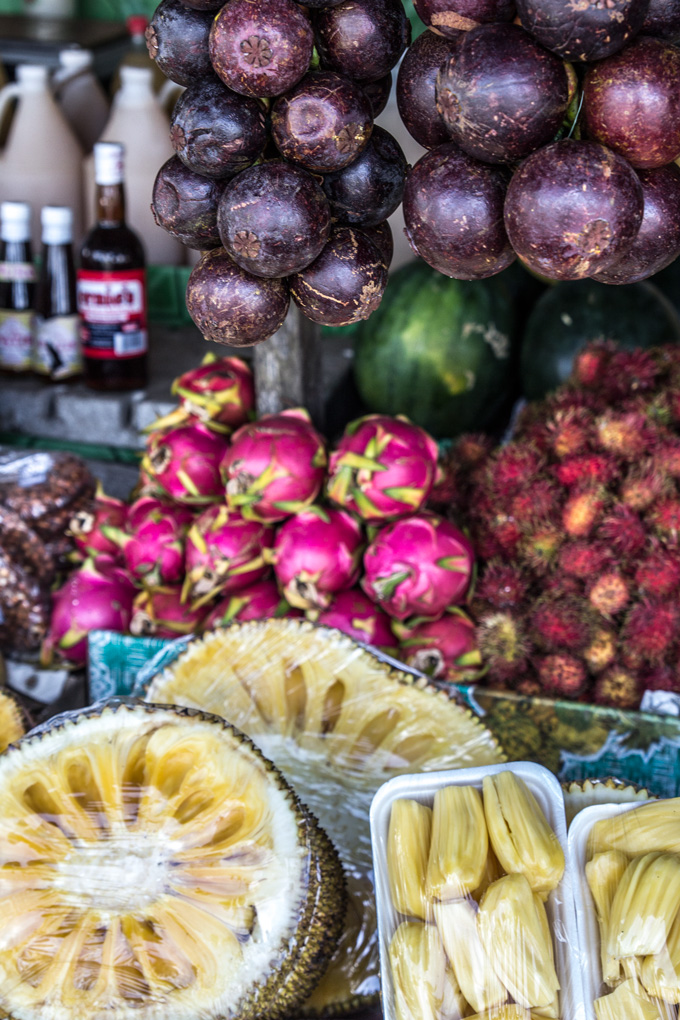 We stopped at the top of the Tagaytay Ridge to admire Volcano Island in Taal Lake. 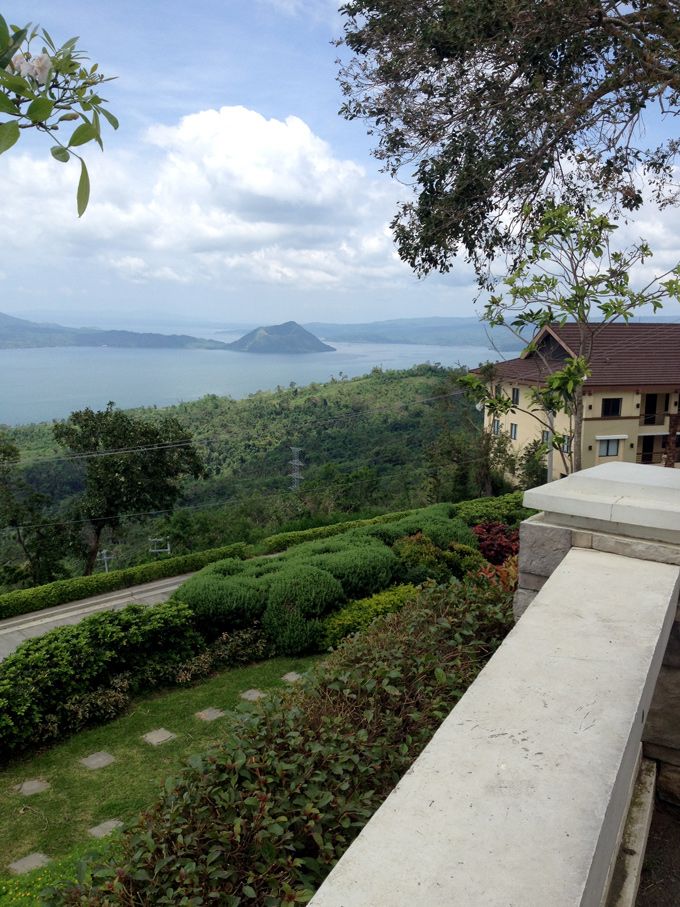 Daang Kastila trail is the access point on Volcano Island. We boarded a motorized canoe to cross the caldera lake. We could smell sulphur in the air. The panorama was stunning.

Little did I know that the hike would be so brutal. While my entire tour group mounted ponies for 1,ooo Pesos ($22.89 USD), I insisted on going by foot, partly because I had read that the ponies were skinny and poorly cared for. While that was true of some, most looked relatively healthy, though I still pitied the them for the rough handling they received from the guides.

The trail is dusty, steep, and narrow. After 10 minutes, the one other tourist walking it with me insisted on going horseback for the remainder of the ascension. Okay, that’s fine. I will pace myself and stay on foot. I am woman, hear me roar! 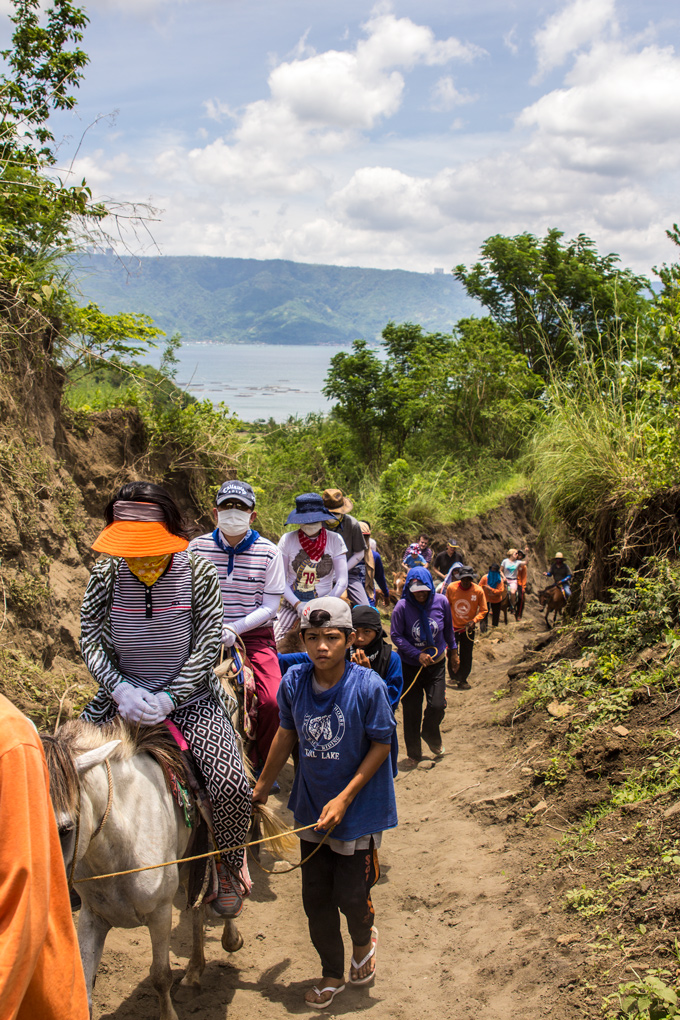 Fast forward 30 minutes. I’m wrapped up like Ramadan earning puzzled stares from tourists descending the mountain on their overworked ponies. Did I mention I’m wearing a dress and ballet flats? Hey, I live the  “Travel like a lady” mantra. Neither the dress nor the shoes are the problem. It’s the heat. It’s at least 90 degrees but it feels hotter. My face is flushed and I’m not confident I won’t pass out. I stay hydrated and keep my head covered. My feet aren’t sore, but I’m getting these major hot flashes in my head and the last thing I want is to take a spill off this mountain. My husband passed me on horseback long ago and I know he must be worried. I hope he doesn’t come down to retrieve me.

I look ahead and see the worst part of the trail — a narrow, snaking dusty ridge with tall dirt walls. Even the ponies are struggling to stay upright as they ascend. The pass is too narrow for two parties, so I’m hoping I won’t fall down and get trampled. All the while, I’m thinking of the reward at the top — my husband and an emerald-colored lake within a volcano. Must. Press. On. 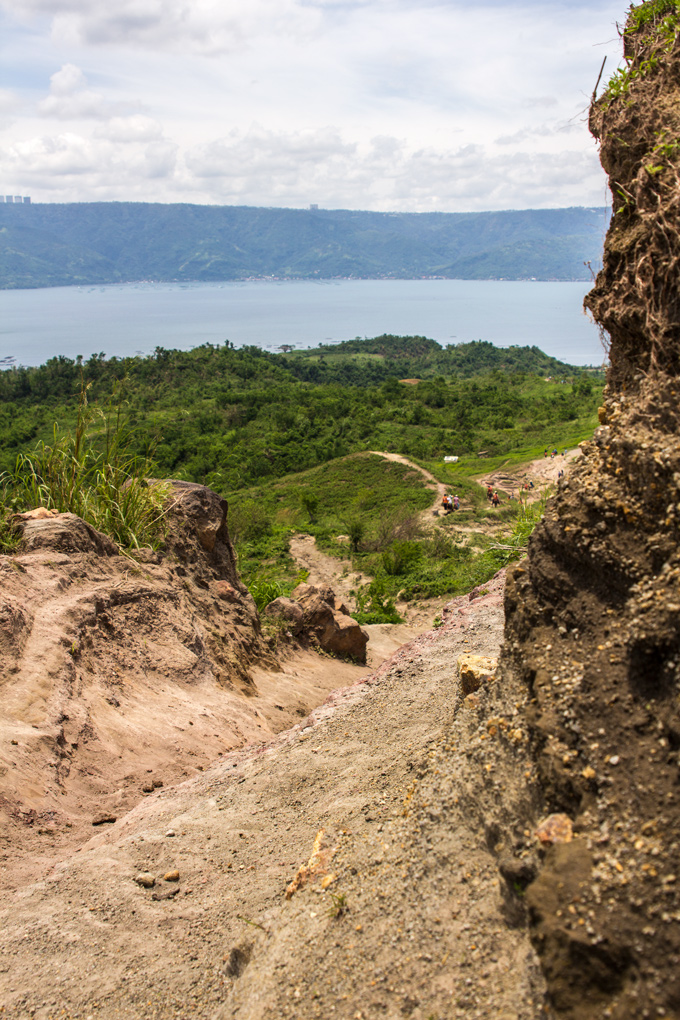 I see my husband at the covered lookout at the top of the trail and feel relieved. Yet, I must sit down. I’m feeling nauseated and flushed and warm all over. Is this a runner’s high? I’m at the junction of exhaustion and elation. If I sit down, will I be able to get up? I find a patch of dirt to the side of the beaten path and reluctantly plop down. My guide, who is wearing flip flops and not even carrying a bottle of water, looks back disappointedly. He moves aside as a handful of ponies wobble down the precipitous path. I motion for him to take my messenger bag, which houses my camera and not much else. Perhaps I can make it without the extra weight, as little as it is. 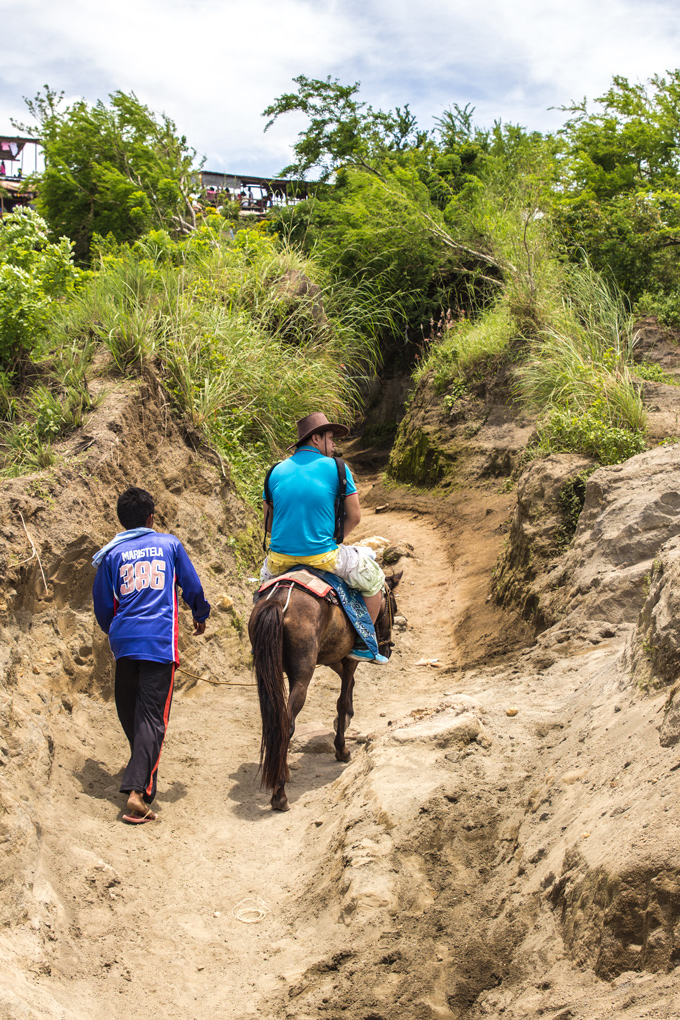 He grabs my hand to pull me up the steepest part of the trail and before I know it, I’m standing face to face with resting ponies! Still, I’m not at the lookout yet. There are still 20 concrete steps to ascend and I’m doubtful, once more, that I can avoid collapse. I go slow at first, then quicken my pace on the last ten steps. I made it! I’m feeling quite proud of myself for making the 1,300-foot ascension.

“I feel like an Olympic medalist slash Filipino folk hero,” I tell my relieved husband at the top of the mountain. He hands me a bottle of water. My hands are shaking as I try to shoot a panoramic of the awe-inspiring view of lake within a volcano within a lake. I hand him the camera with the usual impossibly specific art direction. 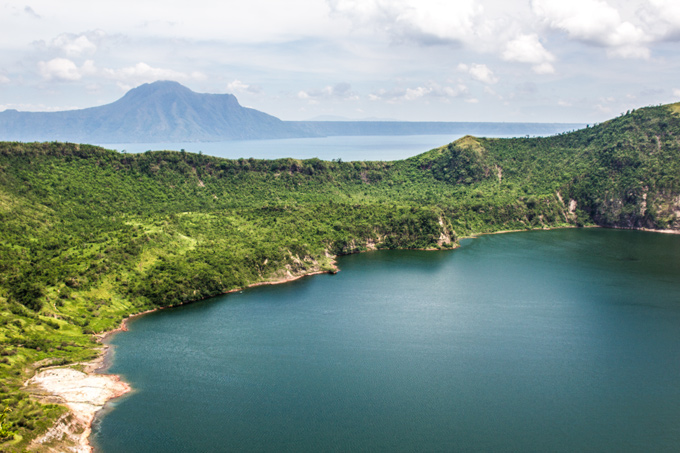 I haggle with a local girl for a coconut to drink. She gives me a look of amusement and disbelief when I offer 70 pesos instead of 100. I later feel bad for haggling. It’s obvious how destitute the people on this island are. 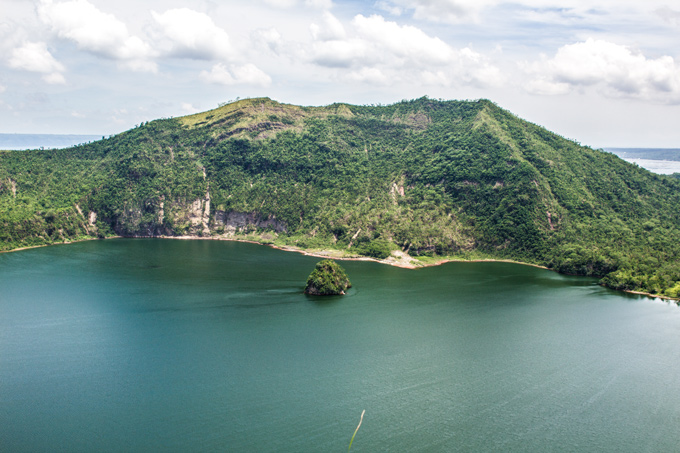 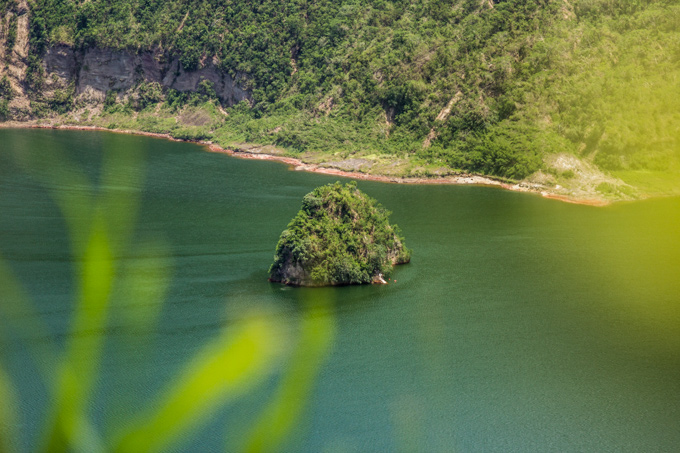 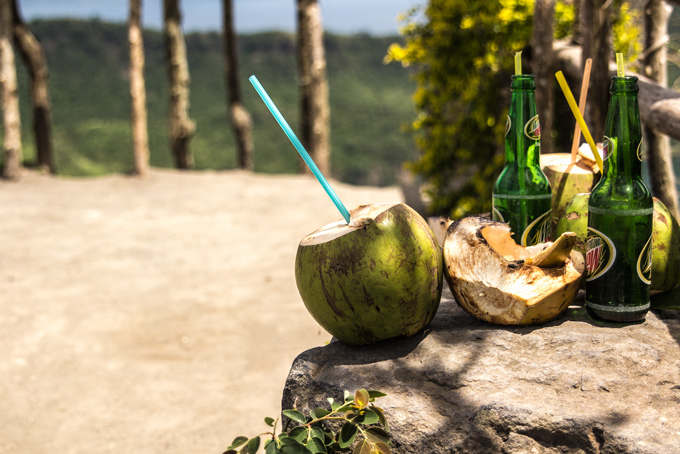 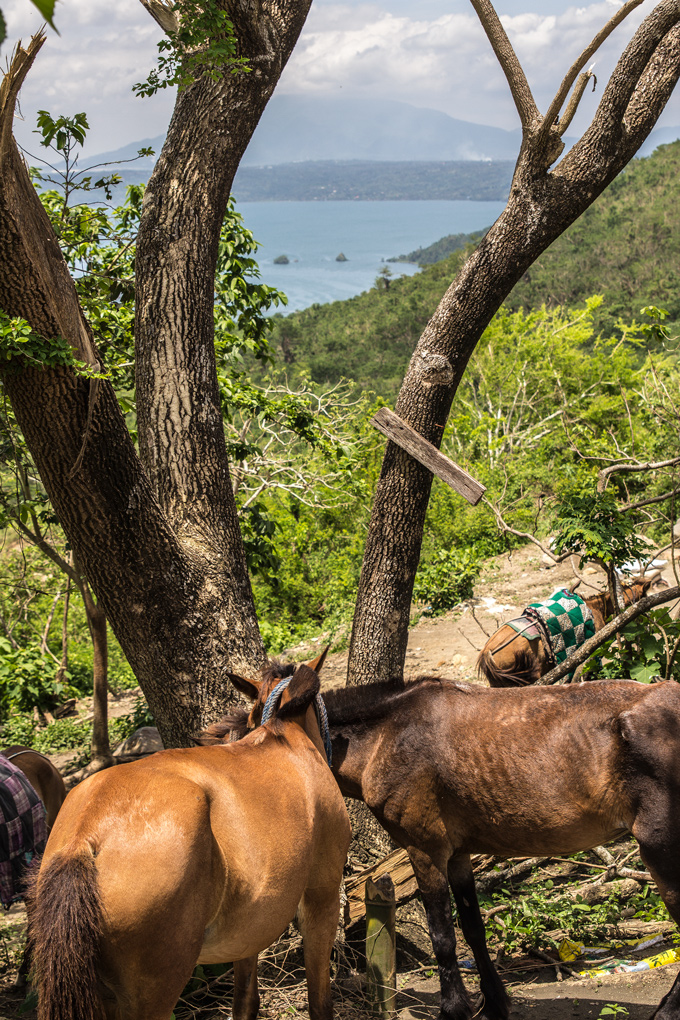 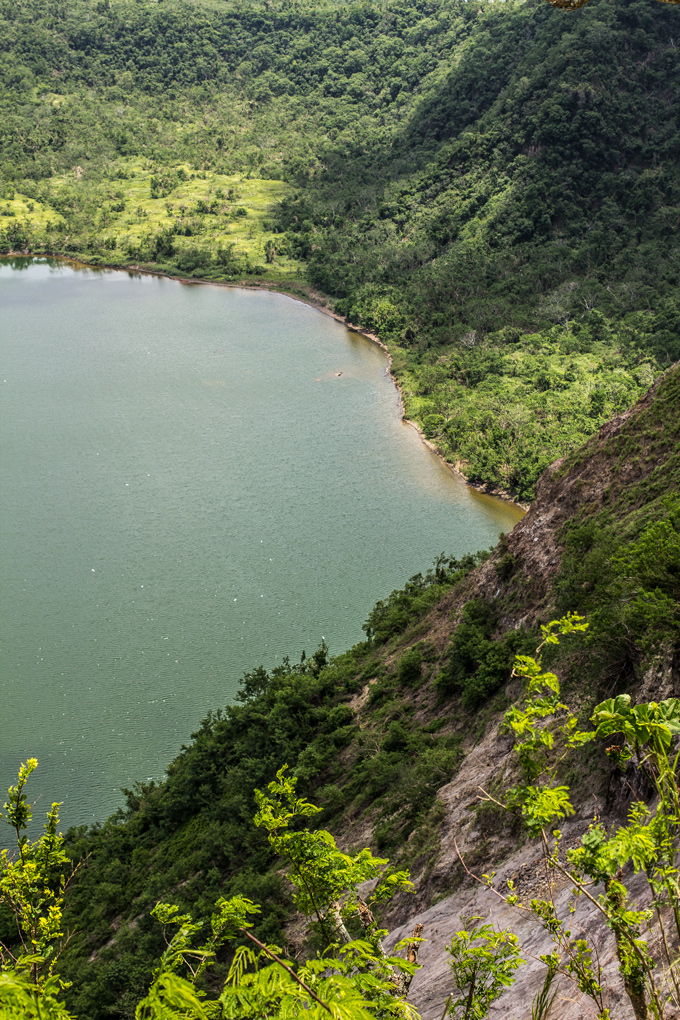 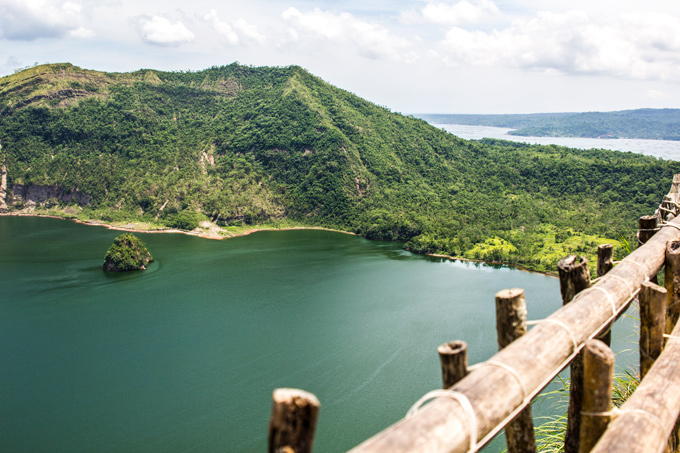 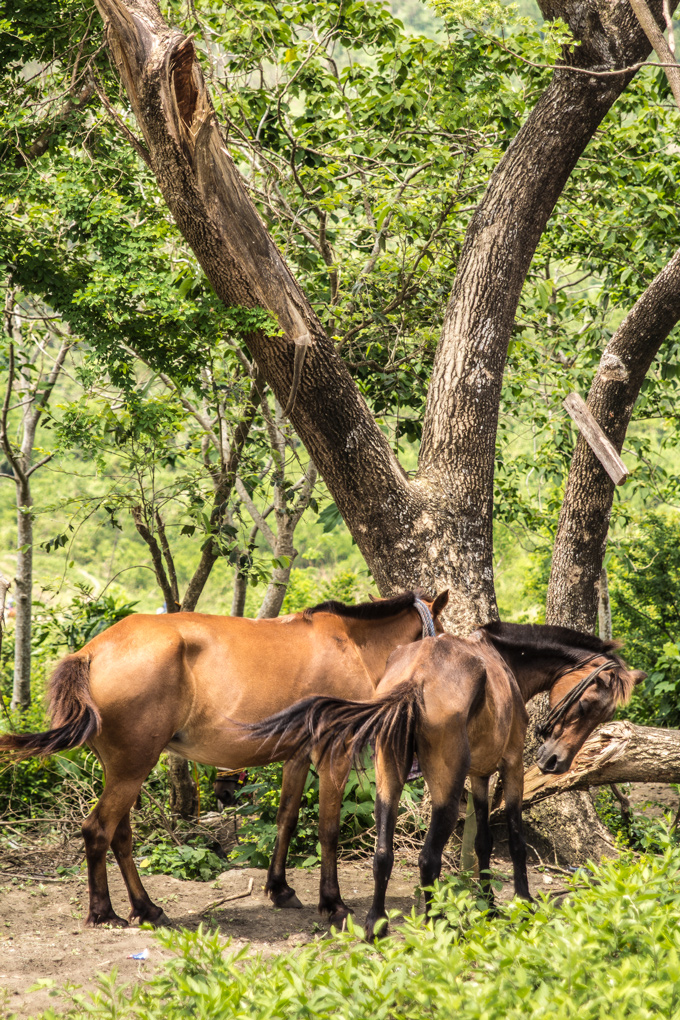 The view makes the nearly impossible journey well worth the effort. I spend far less time than I’d like photographing the beauty in every direction. It is time to descend the mountain. I am surprised that my guide is surprised that I want a pony. I pay full price for traversing only half the terrain, but I don’t care. The dirt is loose and I’m wearing ballet flats, so I’m not going to risk life, limb, and lens on the way down. Plus, I get a young, healthy pony so my conscience is somewhat clear. I am still annoyed at how roughly the ponies are handled. 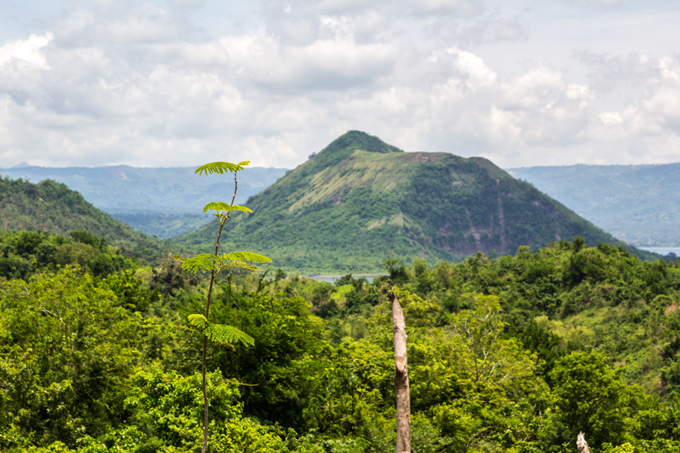 Within 40 minutes, black sand is crunching underfoot as we board our motorized canoe and traverse the calm and beautiful Taal Lake. Water splashes my face as we fly over small waves. It feels refreshing. The two Nepalese men in our tour group break out in giddy song and though I have no idea what they’re singing, I know why. 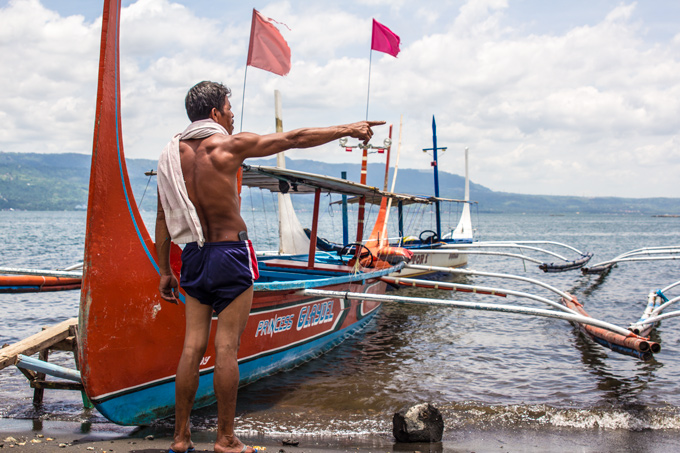 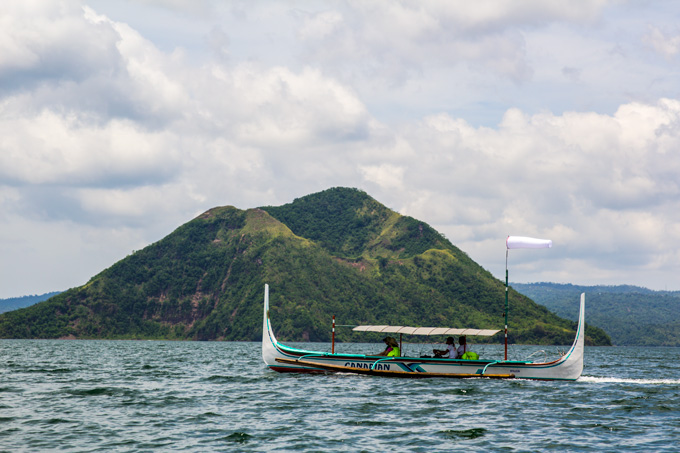 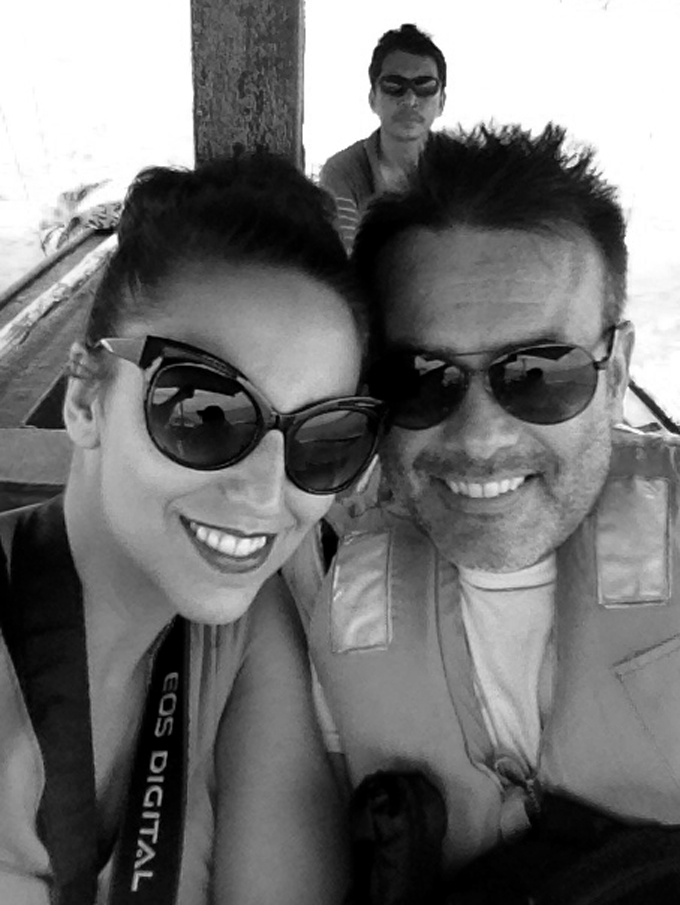 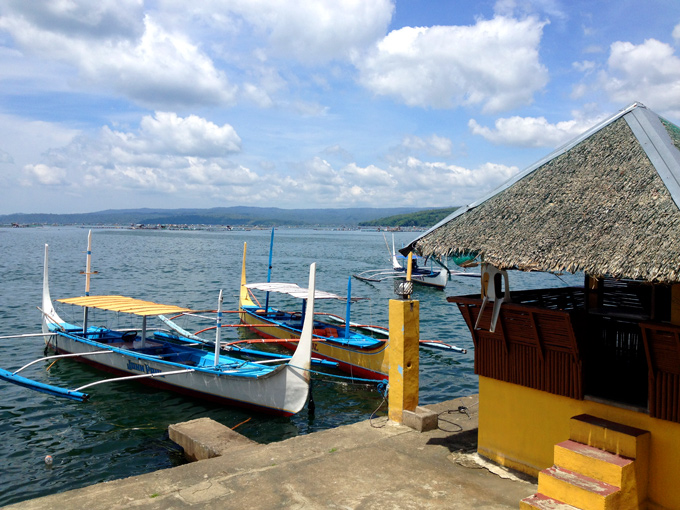 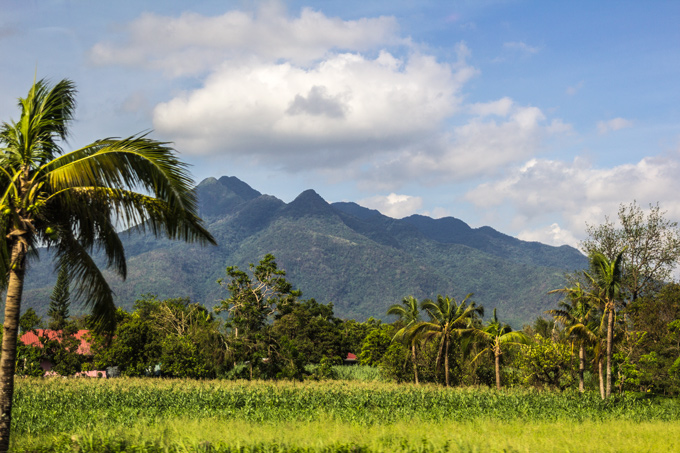 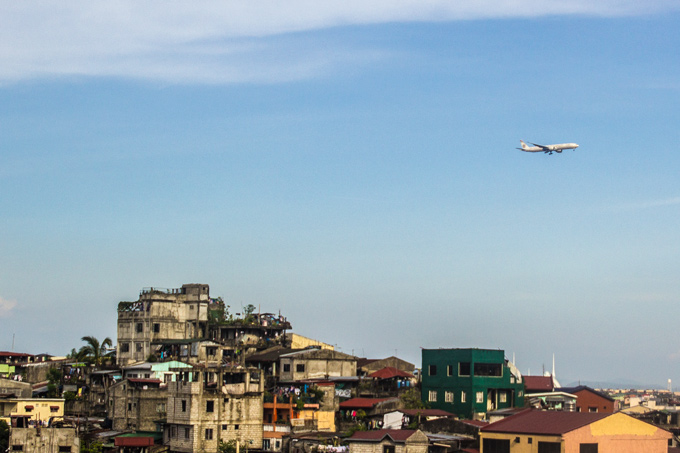 Such an amazing trip! Love to see your posts. So inspiring! Makes me want to see the WORLD!

I’m so glad you’re enjoying the posts! Do you have a trip planned this year?

Trying to make plans, want to take the kids somewhere they will enjoy. I truly think Ubud might be the place! Any advice on time of year to go?

Hi, Jessica! We got married in Tagaytay, but we’ve never been to the Taal Lake. Perhaps before I leave the Philippines for good, I might convince my husband to try this. It would be a shame if we didn’t!

Yes, I think it will definitely be worth your time. You can get a day tour out of Manila. We had a good experience with Great Sights tour company and I’m not paid to say that!

Thanks for the recommendation, Jessica! I’ll take note of this. 🙂

Wow, it sounds like it was a hot, hard day but well worth it! A couple of my coworkers are Filipino and have inspired some wanderlust about the Philippines, your post has just doubled that!

There are over 7,000 islands in the Philippines! So much more I want to explore. Hopefully, up next: Banuae Rice Fields!