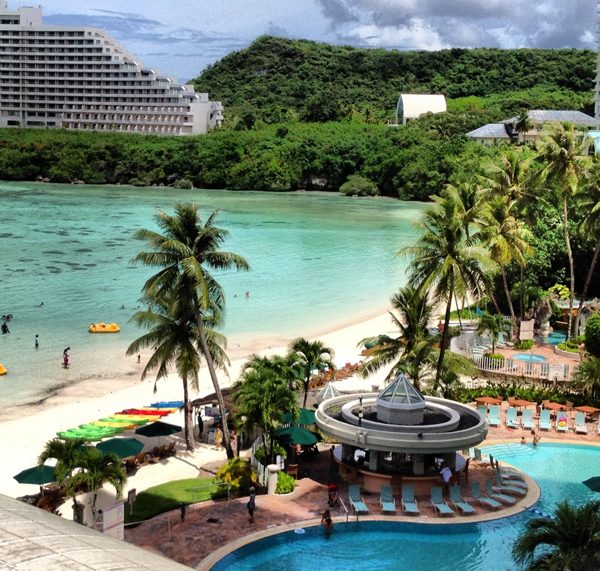 It’s no wonder Guam receives one million visitors a year. White sandy beaches, clear turquoise waters, and a gentle ocean breeze welcome visitors from Japan, Korea, Taiwan, Hong Kong, Australia, Russia, China, and the U.S. And with all the first world amenities Guam offers, it’s surprisingly mellow. What has coalesced at 13 degrees North is pretty much the best of both worlds — old and new. From centuries-old Spanish forts to multi-level Louis Vuitton stores, Guam is the crossroads of ancient culture and modern commerce. Refusing to be pigeonholed, the island with a population of only 156,000 has become all things to everyone — the shopper, the adventure lover, the spa goer, the beach bum, and the culture enthusiast, to name a few.

The sun streams through the opening in the curtains at your hotel of choice on Tumon Bay. This room, like many in Pleasure Island, has a waterfront view. The Philippine Sea is already a stunning turquoise when you finally make it to the balcony for coffee and a light breakfast. You can see the waves breaking gently on the reef. The pool below looks inviting, but you do actually want to soak up the waves, so you slather on sunscreen and head downstairs. Twenty steps later, your toes sink into the sand — and this early, it feels like your own private beach. Where are all the tourists? you wonder. By noon, you know. Beaming moms and dads are snapping happy pictures of their toddlers playing with sand and seawater for the first time. Twentysomethings are paddling through the shallows in boats shaped like giant rubber duckies. You rented a snorkel mask and fins and are amazed at how many colorful fish you see so near to the shore. Who’s watching who? you wonder when petite, translucent, pin-nosed fish near the surface eye you curiously. You’re glad you rented an underwater camera. Your Facebook wall could use some sprucing up.

Just before you lobsterize, you hit the shops at The Plaza. Gucci, Coach, Prada — this feels like a mini Fifth Avenue. You’re just window shopping until you realize Guam is duty free. You choose a colorful scarf from Gap still not sure whether it’s a gift for you or a friend. You can decide later, there are still five more shopping malls to peruse.

It’s 1 o’clock as you slide into a chair at the colorful Ban Thai. You reluctantly pace yourself through the spicy buffet, full but not comatose and ready for a scenic drive. You are your own guide on the 3-hour tour, but it’s easy to follow the single winding road that hugs the southern curves of the island. You can’t wait to brag about standing on top of the world’s largest latte. Okay, it’s not that kind of latte, but it’s still a record-breaker.

You stop off at I Memorias Para I lalahi-ta, to take in breathtaking vistas of the angular southern hills and the Philippine Sea. You can see the bright orange Umatac Bridge and even the storied Spanish fort, Fort Señora Nuestra de la Soledad, in the distance. You take a deep breath of crisp salty air. Is this paradise?

You make a quick stop at Kathy’s, a nondescript convenience store, for the island’s best pickled papaya. The spicy snack gets you through the rest of the lazy southern drive.

Rounding the tip of the island you see the tiny Cocos Island and make a mental note to take the ferry out for a day trip next time.

You drive through the blink-and-you’ll-miss-it historical village of Inarajan for a dip in the crater-like pools. A gentle rain has bestowed a thin mist on the green beach. If it wasn’t for the 86-degree tropical weather, you’d think you were in Ireland.

A few miles later, you’re at Talofofo Bay and sinking your toes into one of Guam’s rare black sand beaches. The current is too strong to swim here, so content with your photos — perched atop the massive stones lining the beach — you head for Yona (pronounced joan-yuh). Before you start down the hill towards Pago Bay, you take a quick right towards Del Carmen apartments for a spectacular view of the eastern coastline. You arrive in time to nosh on some tasty Chamorro BBQ at Guam’s popular night market, Chamorro Village. You watch a 7-year-old ride a massive carabao and then catch a charming cultural dance by local high schoolers. You make a mental note to bring your nieces and nephews next time you vacation on Guam. You purchase inexpensive jewelry by the basketful at Surf Beads, satisfied with the quality souvenirs you’ll gift to your friends and family. You buy a box of spicy Pika Chocolate at Guam Chocolate — one for you, one for them. After petting a monitor lizard and holding a coconut crab, you can’t wait to sink into your plush bed at the hotel.

You’ve booked a dolphin watching tour for today so you leave the hotel early. Before noon you’re sailing along the southeastern coast and can see the island’s tallest peak, Mount Lamlam. Another record — if Lamlam was measured from the deepest point in the Sea, the Marianas Trench, it would clock in as the world’s tallest mountain. Your guide tells you that though Mount Lamlam is only 1,332 feet high, the distance from the peak to the bottom of the nearby Marianas Trench is perhaps the greatest change in elevation on Earth over such a short distance. The Trench reaches a maximum known depth of 6.78 miles. If Mount Everest, the highest mountain on Earth at 29,040 feet, was set in the deepest part of the Marianas Trench, there would be 6,760 feet of water left above it.

No wonder James Cameron was so eager to dive here.

Your deep thought is interrupted by an eruption of cheers from your fellow tourgoers. A pod of dolphins is swimming just next to your boat, as eager to check you out as you are to see them. The boat stops near the reef and you hop out to snorkel. Three hours later you are back in Tumon’s Pleasure Island lapping up spicy tuna rolls or whatever Japanese delight floats your boat… which leads to a quick nap on the beach. You’ve heard Tanguisson Beach is a must-see, so you drive past Two Lovers Point (which you’ll come back to) to take in the monolithic limestone plumes of Tanguisson.

Feeling refreshed and a bit adventurous, you journey past Tanguisson Beach towards Shark’s Cove. After a 20-minute walk along the winding beach, you plop down on a desolate patch of sand and notice just how crystal blue the water is. This calls for some snorkeling and no, you don’t see any sharks. Just before the sun sets you make it to Two Lovers Point and read the legend of the ill-fated Spanish beauty and her forbidden Chamorro beau. It’s Guam’s Romeo and Juliet story with every bit as tragic an end. The views of the Philippine Sea and the sharp cliffs are spectacular.

You clean up at the hotel then dine at Kai, an unabashedly mom-and-pop restaurant serving authentic Japanese tapas. You don’t regret ordering the pink dragon roll and a plate of sizzling local fish. You autograph your sake bottle while the owner’s wife snaps a Polaroid and hangs it on the bar. Your sake is waiting for your return and you hope it will be soon.

You’re almost too tired, but a brief rest in the hotel renders you refreshed for a nightcap at Globe Nightclub. Thankfully, what happens at Globe stays at Globe.

Your last day on Guam certainly won’t qualify as winding down — you’re headed to Fish Eye Marine Park for a Seawalker tour. You descend a latter into the ocean with a uniquely designed helmet filled with air. This safe and easy activity lasts about 20 minutes and you always have the helping hand of a guide. You enjoy feeding friendly fish and seeing natural coral life such as anemones. After your dive, you kayak and then linger on the long bridge to enjoy the clean ocean air. You scramble for your camera just as a light rain deposits a rainbow over the water. Perfect.

You’re back on Tumon Bay for lunch, enjoying a burger at The Beach Bar & Grill on Gun Beach. Your margarita hits the spot as you lean back in the padded beach chair. A few beers later and you are walking through an ancient Chamorro village at Lina’la’ Chamorro Cultural Park. You’ve stepped back in time to experience a taste of Chamorro life 500 years old. Lina’la’ Park rests on an actual Chamorro village, dating over 1,000 years ago. Latte stones, pottery, and other artifacts reveal that villagers lived there until the beginning of the Spanish era in the 17th century.

You roll towards your hotel just as the sun is setting and run to the top of The Westin Resort for a snapshot. Amazing! You see the fabled green flash just as the sun dips below the horizon.

You’re tired but not too tired to catch the cultural dance at your hotel before you crash. Young women in grass skirts pivot around muscled men in loin cloths. The pounding of drums accompanies the twirling fire. Wait, what? They want you to come on stage? You bashfully agree and are cheered on by the crowd as you beg your hips to swivel like the professional dancers. Oh well, it was worth a try. Author got the story about Two Lover’s Point wrong. The Chamorro beauty chose her Chamorro male boyfriend over the Spaniard and they committed suicide by tying their hair together and jumping from the cliff. The woman who killed herself was not the Spaniard. Nice photos, though.

The woman who killed herself was Spanish and Chamorro. Read more here: http://www.twoloverspoint.com/legend.htm

Thanks for pointing this out. I guess there are different versions of the story about Two Lover’s Point, and I heard a different one. This is not recorded history with details, possibly just a fable or fairy tale. Others in this category are about Sirena, and the fish that ate the island and gave Guam its present shape The name Puntan Dos Amantes has been questioned by historian Paul Carano, who authored the first History of Guam. He stated that the correct name was Punta De Los Dos Amantes. Many on Guam have also mistakenly referred to the Fort Santa Agueda in Agana Heights as Fort Apugan. Actually the fort was on Apugan Hill, but people not knowing the actual name simply said Fort Apugan. All the Spanish forts and fortifications on Guam are named after Spaniards (Soledad, Santo Angel and San Jose in Umatac, as examples). Apugan is one of a Chamorro place names given to various spots on the island. Tutujan is another place name of another part of Agana Heights. Great article, and photos. I am glad that she wrote it and that it got some publicity for Guam.

Thanks for the research and for reading Global Girl Travels!

Although i agree that Guam is a nice place to visit….maybe 3 months top..but living here is a totally different vibe….

I thnk she lives on Guam… Read under the article. xD The about the author section.

But apart from that, the article was very good as a tourist’s three day guide. Gets in a lot of the tourist attractions.

Wonderful article! Thank you for coming to Guam and even trying out Guam Seawalker Tours! Hope you enjoyed it!