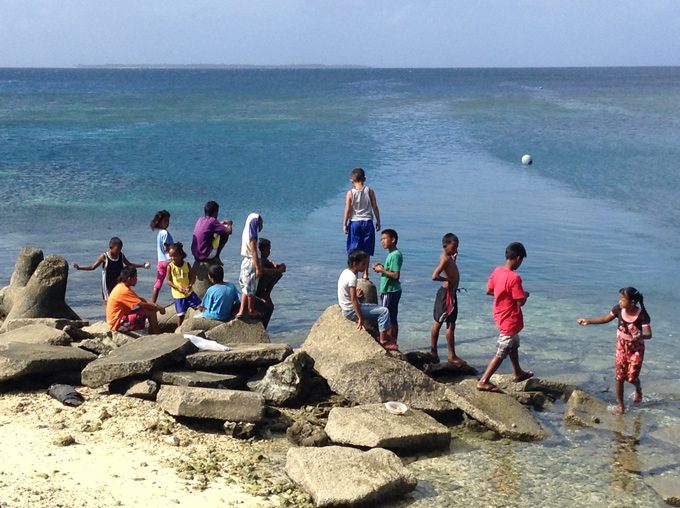 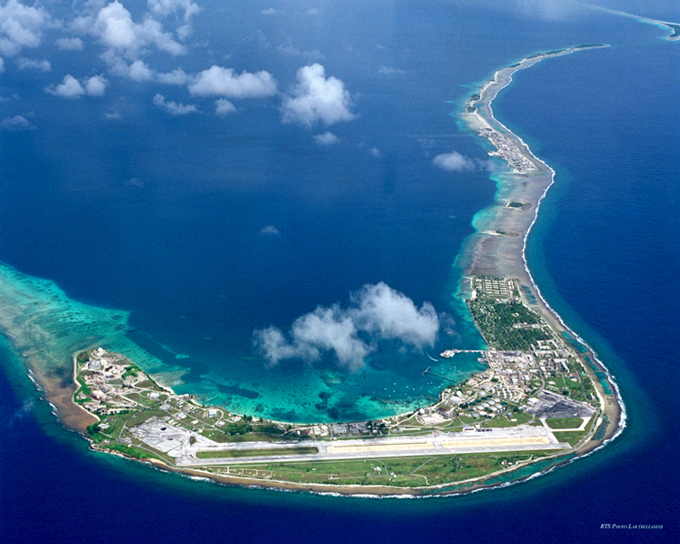 In the heart of the South Pacific, 2,100 miles southwest of Hawaii, is a small atoll that houses one of the U.S. Military’s most strategic outposts. The island’s name is Kwajalein (K-wa-dj-u-lan) or Kwaj for short. All of the people who live on Kwaj are U.S. military. If it wasn’t for the mind-numbing heat index and 100% humidity, you would think you were on the Mainland in any other small town U.S.A. The lawns are perfectly manicured, the streets are clean, houses are maintained just as in any other suburban oasis. Just like Suburbia, U.S.A., all of this maintenance is performed by imported help. Oh, come on, you don’t really think the Military statesiders were going to do the work, did you? Please! They are inside, placed firmly in front of the air-conditioning, watching re-runs of “Desperate Housewives”! (Did I mention it’s like a million degrees out there?) No, just like on the Mainland, manual labor is imported. But from where? you might ask. That’s a valid question considering this is an island in the middle of nowhere. However, where there is a will there is a way. Never doubt American ingenuity! 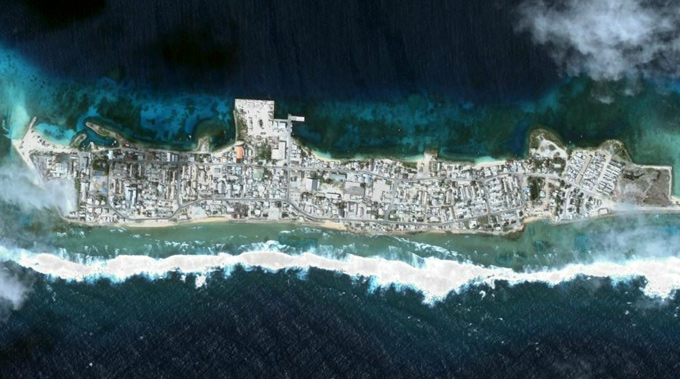 Just 25 miles (56.9 km) away is a teeny tiny island called Ebeye (Ee-by). Ebeye is considered the ghetto of the Pacific (I’m not making that up; see Wikipedia). Ebeye is the most populated island on the Kwajalein atoll with more than 15,000 residents and land area of only 1/8th of a square mile (about 80 acres). Yes, take a moment to process those numbers! Of the 15,000 residents, over half are under 18. It is a real life “Lord of The Flies.” Sadly, you can actually make that reference on the island; no one will be offended since no one knows the book. There is a school, but very few attend. Why go to school when you can play in the streets from dawn until dusk? The next logical question is, How did so many people come to be on such a small island? 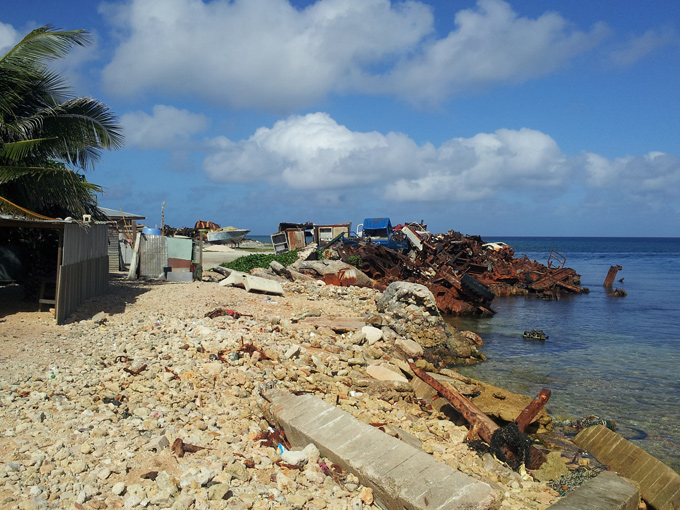 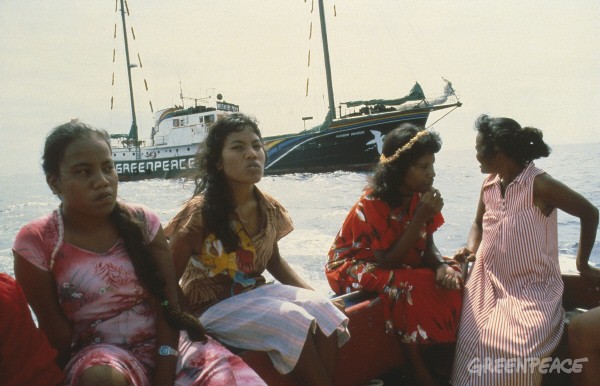 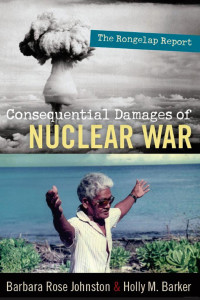 In 1950, the American military decided it needed a far-off place where it could safely (and unobtrusively) test nuclear weapons. Someone happened upon the little atoll dubbed Bikini — ‘Cute name, beautiful island, let’s bomb it and see what happens!’ Before they could start testing their nukes, though, they had to obtain permission. So a group of what I imagine to be very intimidating, high-ranking military generals marched out to this little island that had little to no contact with the outside world. They announced to the island chief that, for the good of all humanity and the world, they needed to borrow their island for just a little while. Since it was matter of world wide security, the chief consented, having no idea what is about to actually happen (welcome to western civilization).

All the citizens of Bikini Atoll are promptly moved to Ebeye so that testing could commence. And boy did they test! They were so thorough that 63 years later the atoll that was Bikini is still so radioactive it is uninhabitable. The cataclysmic 15-megaton Castle Bravo nuclear test at Bikini Atoll on March 1, 1954 unexpectedly rained nuclear fallout and two inches of radioactive snow on nearby Rongelap Atoll, which had not been evacuated as had Bikini. The 1954 American authorities then evacuated Rongelap and were returned in 1957 with extensive medical surveillance. It wasn’t until 1985 and the biological damage was done that Greenpeace evacuated the inhabitants of Rongelap to Mejato island, approximately 110 miles away. Ebeye was the final destination for many of them in ‘Operation Exodus.’ Because Ebeye is significantly smaller than the islands of Rongelap, joblessness, suicide, and overcrowding are ongoing problems. Read more about the fallout on nearby Rongelap Atoll on the Greenpeace website and in this book. 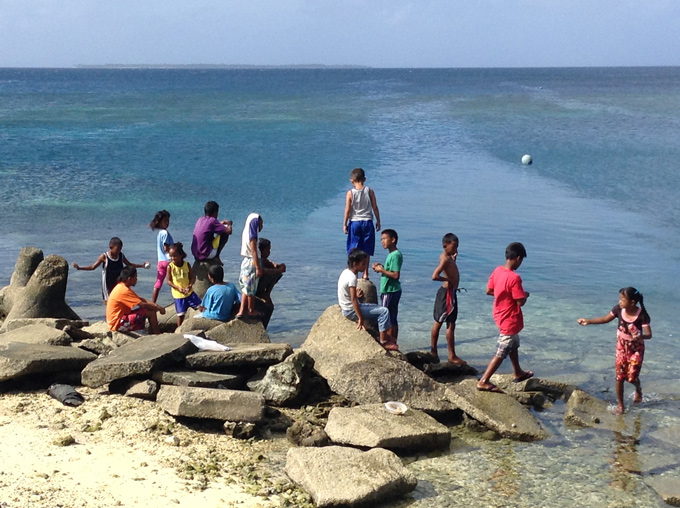 Now, I can’t say the residents of Bikini didn’t get anything in return; the islands were leased so they did get some monetary support. The U.S. government also pays for most the former resident’s health care, at least those that can show that their conditions stem from radiation, and that just happens to be most of the residents. Cancer is rampant on the island. Children are born with extra digits and missing limbs, they are called “Octopus Kids” (Don’t believe me? Google it!). The waters surrounding the islands are some of the most radioactive, as well as polluted in the world (at least, prior to the Japanese nuclear meltdown).

For a more detailed history that will absolutely turn your stomach, watch the video Rocket Island.

The point of this post isn’t to try to affect change — I wouldn’t even know where to begin. There is no happy ending, no warm and fuzzies to make us feel better about the world. It is simply to bring awareness to something that most people, Americans in particular, seem to be blissfully unaware of. Consider the bubble burst!

I have talked extensively with friends who have visited and lived in Ebeye — both as teachers and construction volunteers. Many remark at how surprisingly happy, friendly, and appreciative the islanders seem. They are some of the most humble people in the world.

I didn’t have a clue that this place existed, but I have to say, I’m hardly surprised. So many lives are displaced through war, and not just the fighting itself. This is just another sad example. We have something similar in Australia where areas were evacuated of Aboriginal people for nuclear testing without the traditional owners, or the general public being given full knowledge of what was about to occur and what the consequences would be.

It’s amazing most people (including me) had no idea those places existed! How could this ever happen? Terrible…
Vera,
http://theflashwindow.weebly.com

giveaway on my blog!

You want to go to Ebeye?

Those landscapes are just breathtaking! Thank you for this post, as this island would have gone unnoticed by me otherwise.

I meant the island from above. 🙂

Wow, truly never knew about this island. Very eye-opening about some of the places out there

I have never heard of Kwajalein or Ebeye, but I am certainly going to go off and learn more. Thank you for such an eye-opening post.
Claire xx

The Marshallese government is paid huge sums of rent every year for the lease on Kwaj and they pocket that cash and don’t care about their own people. The workers on Kwaj are happy to have the jobs they have. The USA has settled the test issue several times already and lawyers keep bringing up the subject. Not for the benefit of the locals but for the 33 and a 3rd percent they stand to make off new settlements. The RMI government needs to step up now. Stop blaming the USA. They have paid a ton of cash, actually an obscene amount of money to the leaders of that country and every time I was there I never say any evidence that it was not put into a private bank account.

Thanks for this comment. What you say is true. It’s unfortunate the money doesn’t really help the people. They would have been better off on their original islands. And really, no amount of money can make up for birth defects and chronic illnesses.

Did the movie “The Hills Have Eyes” expose this story one time.

My grandfathers was Mayor Johnny D. Lemari who had passed about 3 years ago. When I went there we had to stop at Kwajalein and I thought it was beautiful, but then I went on a boat ride to Ebeye for his funeral and I couldn’t believe my eyes. The whole island is poverty struck! The houses are made of what looks like tin, the ocean water was rising and some graves were literally buried by water. All the children looked at me and my siblings as though they’ve never seen foreigners. We had much nicer clothing and were well feed. It’s just sad to think about it really, the US put the citizens of the Marshall Islands at risk and then chose to move in on one of their islands. They are now settled in and see poverty right in their back yard. What do they do? NOTHING, they don’t care but us rimajols we do🇲🇭

HOT?? its less than a 1/2 mile across in places. the breeze off the ocean keeps you pretty comfy all year round.And you the author???, you talked extensively with friends??? that’s your source? I lived there! I have adopted sisters and a cousin from that island, so I know a little about the people and island myself. AND to the commenter that talked about sea rise, did you happen to see information that little buster and big buster have grown in size??do you even know what islands those are? Yes there is poverty but there is a lot more to the story than bla bla bla Americans did it because of bikini atoll. Oh and another thing, I also just got back from living on Guam(my choice not military) and just like Out on Kwag, and many other islands I have lived on, the people cranking the Ac down to like 62 is the islanders, they thought I was nuts because I liked the windows open! and if your going to “write”?? informative travel article, try actually going there!