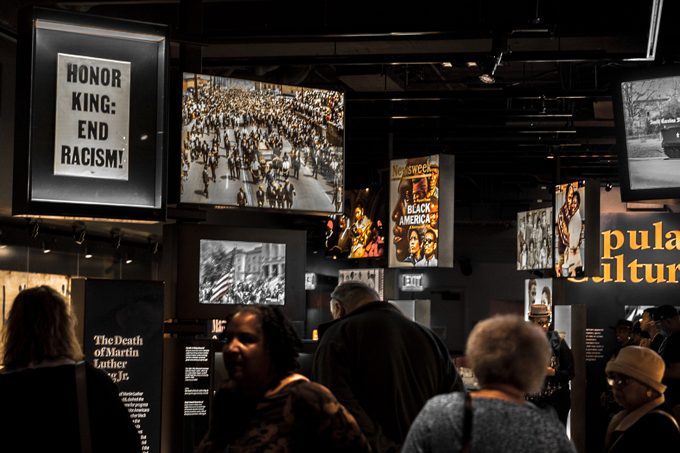 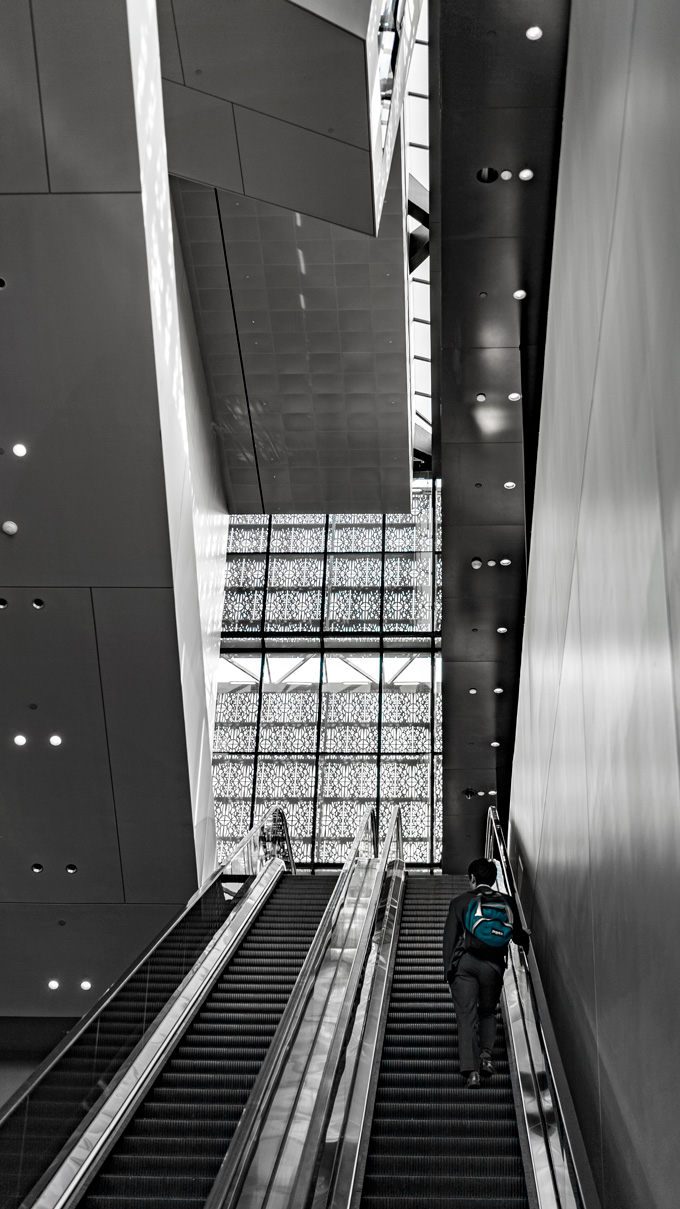 I was pretty excited about visiting the National Museum of African American History and Culture in Washington, D.C. ever since I heard about its opening in the summer of 2016.

I’ve always been interested in minority history and issues. In my adulthood, I came to the realization that I really didn’t understand the origin and impact of the Atlantic Slave Trade.

[slogan]Was I just not paying attention in class or was this shameful history whitewashed in American schools?[/slogan]

I can’t answer that, but I’m glad we live in an era of enlightenment about the true nature of this country’s “founding fathers.”

The National Museum of African American History and Culture makes that plain with an arresting group of bronze statues on the ground floor. Jefferson is standing on a platform with a brick for every slave he owned piled up around him. He is surrounded by women who stood up to slavery and made advancements for black people in this country’s most dangerous times to do so. 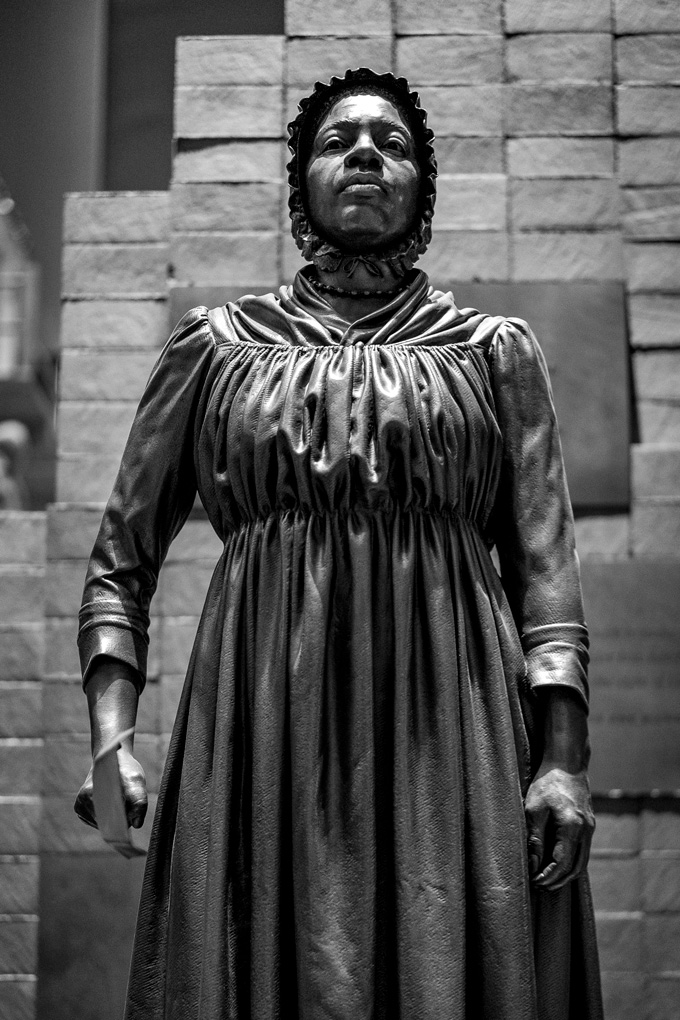 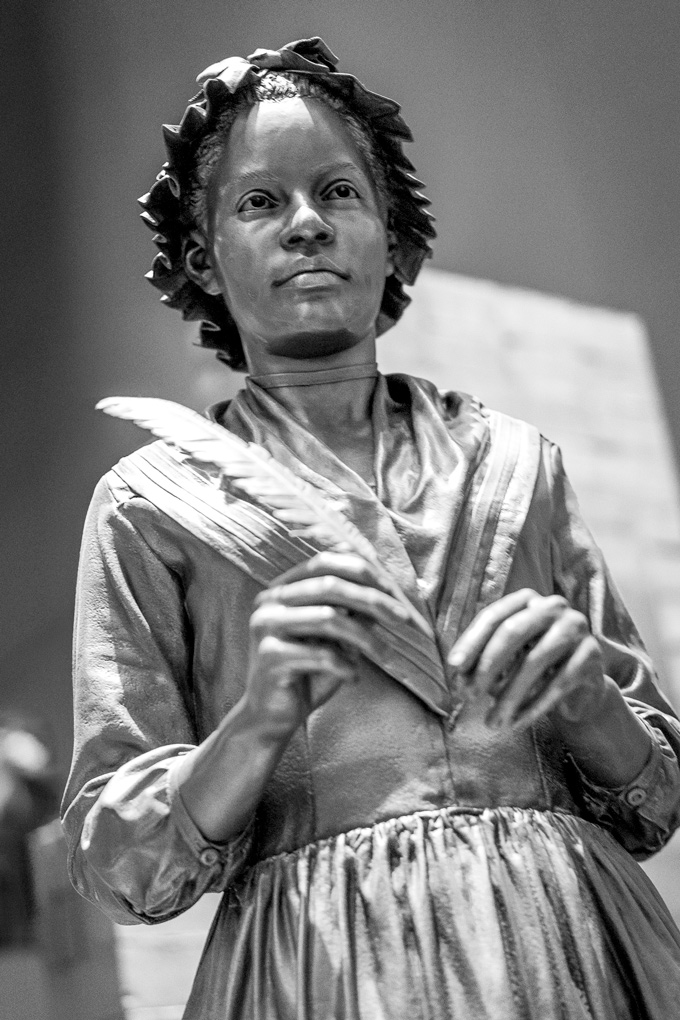 This is just one of the aesthetic elements of the National Museum of African American History and Culture that has a clear emotional impact. The design of the exhibits can you lead you to no other conclusion than that the African American experience is ultimately a painful one.

In fact, the lower floors are literally dark. The dim lighting and narrow passage from the entrance of the history galleries is a psychological trip as well as a historical one.

Mimicking the layout of a slave ship, visitors are forced into close quarters to examine the history galleries which start in 1400 and end in 1968, three floors up. After taking an elevator to the subterranean level C3, you enter a room nearly in darkness, save for the lighted wall displays. Multimedia displays, artifacts, and infographics tell the story of the Atlantic Slave Trade. The claustrophobia is intentional as you weave through a section filled with the sights and sounds of a slave ship.

I often force myself to confront human suffering, but even so, I didn’t find the museum so heavy-handed in recounting the horrors of slavery that I had nightmares. Still, there’s no sugar-coating the immense profitability of slavery and its resulting pain. 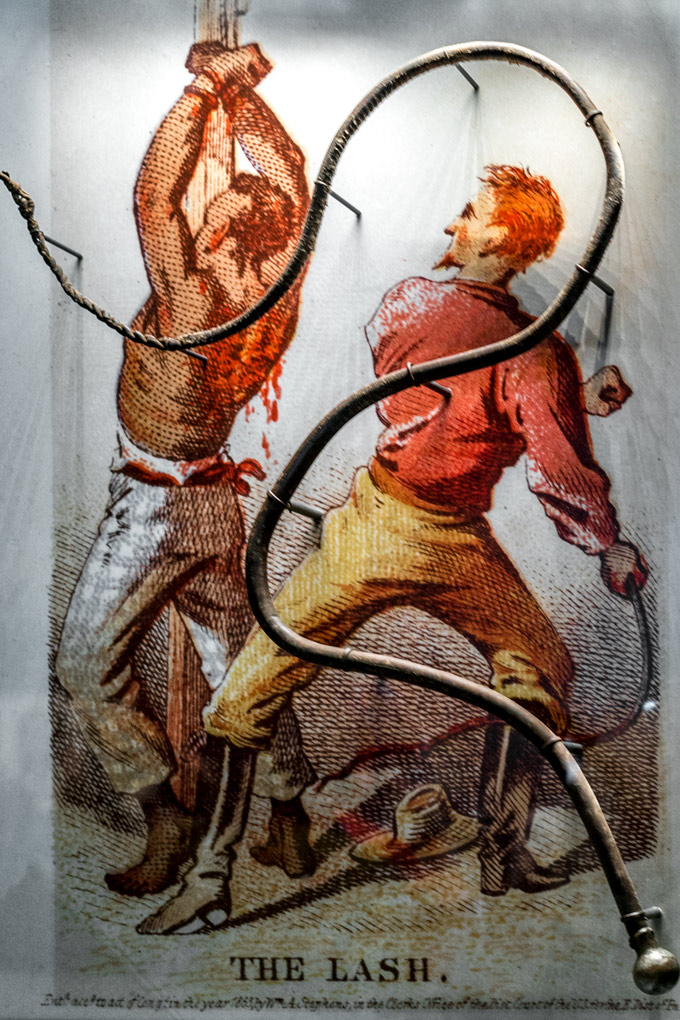 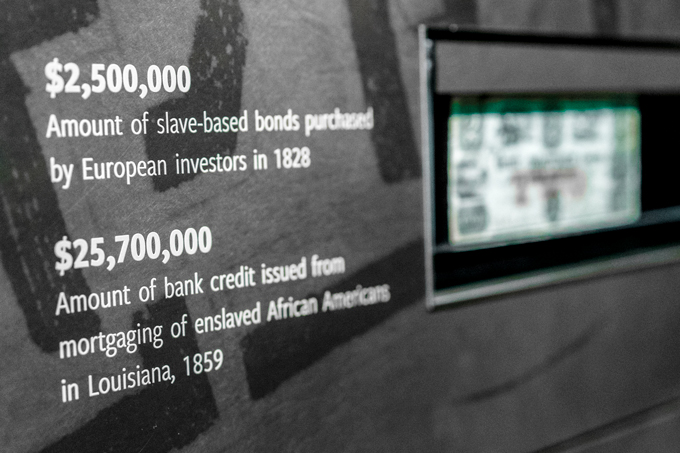 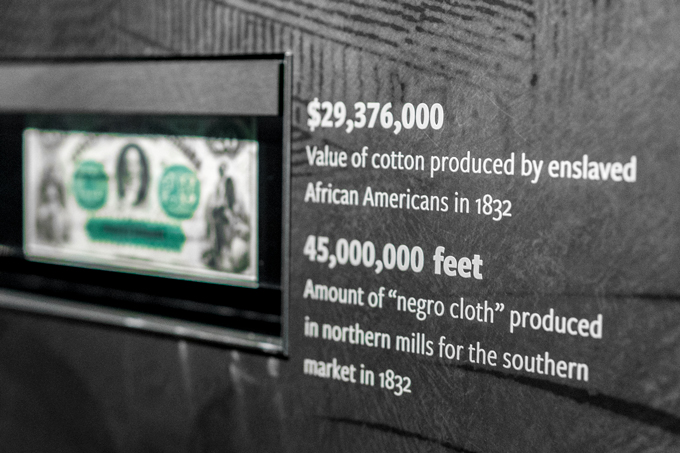 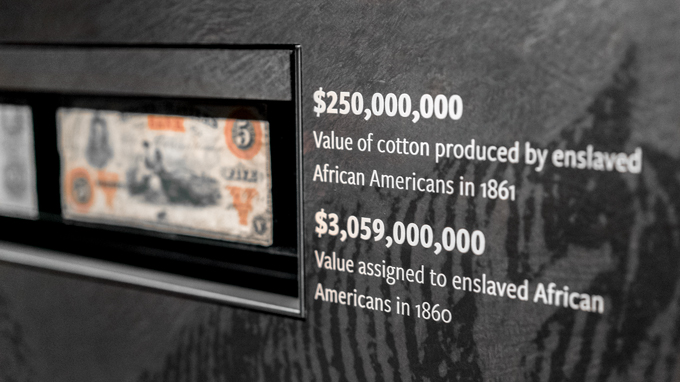 As visitors move upwards towards the top floor of the histories gallery (still in the dimly lit subterranean floors), there is hope. The exhibits move chronologically through the ages — from Black Power to Motown and even a Michelle Obama exhibit. 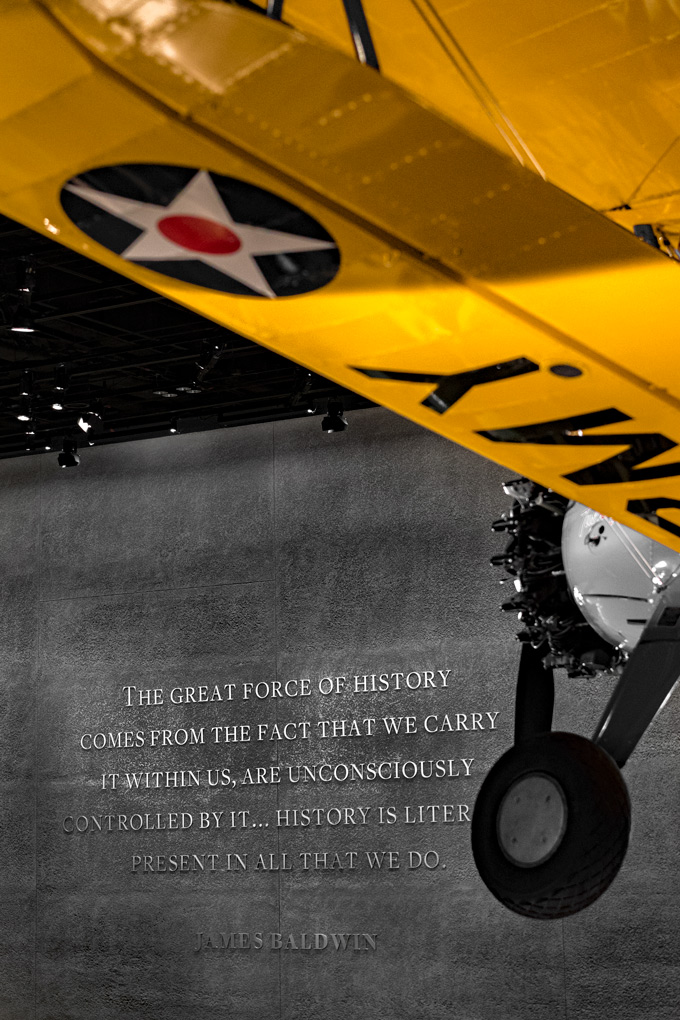 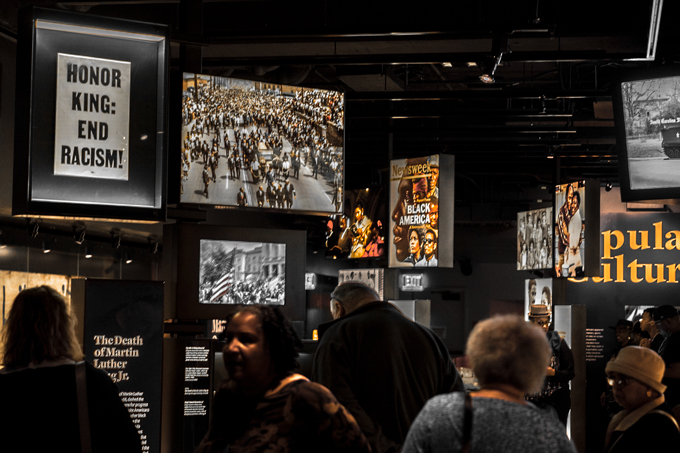 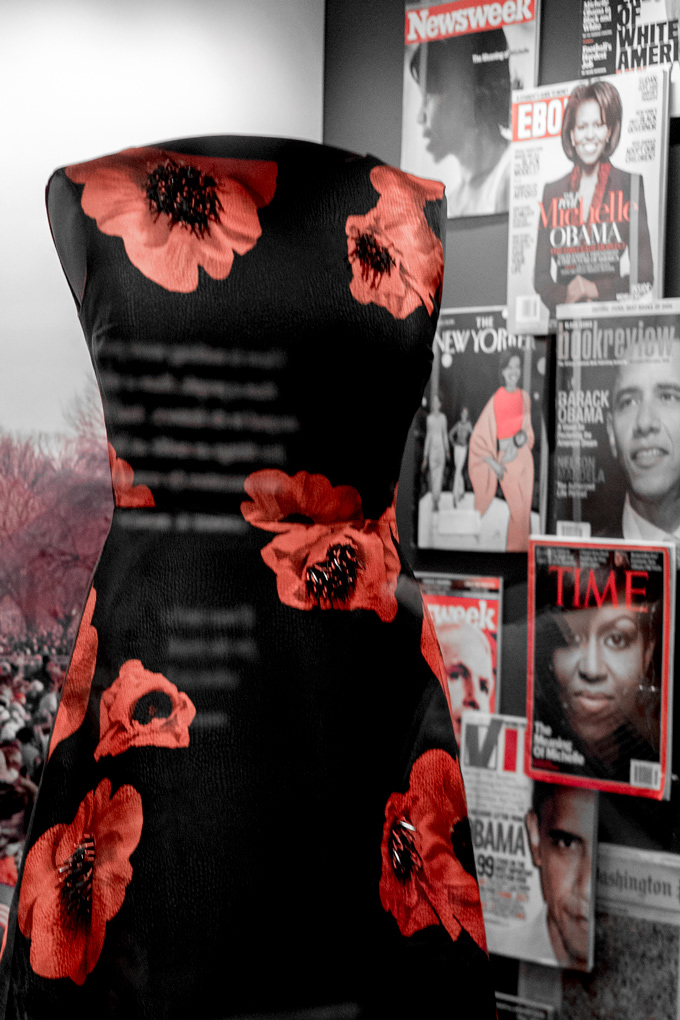 Along the way you meet underdogs and villains, but heroes too. In the upper floors, a celebration of black pop culture through black and white photography was a highlight, as well as learning what it meant to travel the U.S. by car during the Jim Crow era. An African-American mailman became an unlikely hero when he compiled a guide of safe places to eat, fuel up, and sleep. It’s called the Negro Motorist Green Book and was published for 30 years. 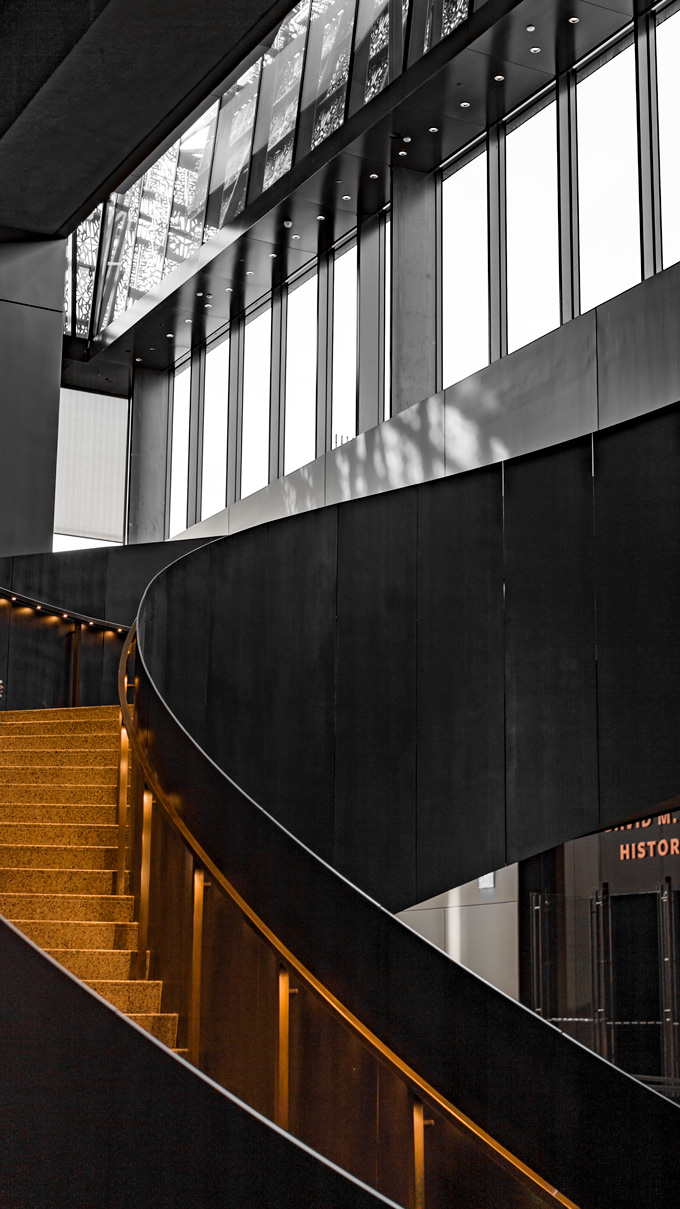 As part of the Smithsonian museums in Washington, D.C., there is no entrance fee for National Museum of African American History and Culture (visit official site here). However, due to popular demand (the museum just opened in September 2016), you must acquire a timed entry pass to enter.

There are a couple of ways of acquiring passes. I arrived at the museum’s opening in the morning, stood in line, and received a pass for later in the day.

You may also try to obtain a pass online, but availability is limited so plan early.

Once you enter, you can stay as long as you like. There are 85,000 square feet of exhibition space, nearly 3,000 objects, 12 exhibitions, 13 different interactives with 17 stations, and 183 videos housed on five floors. Don’t expect to see it all in a day unless you’re superhuman or are wearing 5 inches of foam on your feet. After visiting 4-5 museums in D.C., my feet and back were incredible sore.

What’s your favorite thing to do in D.C.?

It’s interesting to see how big the slave trade was. On a recent visit to Africa I realized the slave trade still exists there. About the museum, there must have been some Michael Jackson things in the celebration of black pop culture? I am a huge fan!

Wow. What do you mean, the slave trade still exists in Africa? Illegally, I’m guessing!

There’s tons of music memorabilia in the museum, but I didn’t get to see much of it because it’s just a huge museum.

Wow those number are horrifying. I knew they were high but not that high. So sad and shameful it still exists today in parts of the world. This should not be. We will make sure to visit this museum and learn about history when we visit Washington D.C.

I’m glad we live in a time where we can talk about the fact that the U.S. was built on the blood and backs of slaves, but yes, very shameful.

Altough topics like these are hard to talk about, I’m glad this museum exists. It is so important to keep talking about it. So crazy there was need for a negro green book. I’d never heard of that.

Yes, Romy, it is important to talk about.

As a Canadian, the “relationship between black and white” is very hard to understand. Of course I wouldn’t go as far as saying that there’s no racism on our side of the border, but it’s very different.
Have you seen the movies about Gandhi, Martin Luther King and Nelson Mandela? I found them so inspiring!
And those statues are beautiful! These women look alive!

Hi Aryane. Yes, I’ve heard that race relations in Canada are very different from the U.S. I’ve seen some of those movies and I enjoy them very much. Thanks for reading!

We were in DC in October and wanted so much to visit this museum. Unfortunately we missed out on the passes so it was great to read your post and get a better idea of what’s inside. It must have been so emotional travelling through time there. What do you think surprised you most?

I think the profitability of slavery surprised me the most. There would be no U.S. global domination without slavery and it’s important to acknowledge that this country was founded on pretty shameful values.

DC has so many museums. I wish India was also that big on museums..ha ha.but well, our country is so colorful that its like a live museum! Love the black and red dress…is there a story behind that too?

Hi Sonia. The black and red dress is Michelle Obama’s! Thanks for reading.

History fascinates me more than anything else. This will be one big reason for me to visit Washington DC..otherwise big modern cities are not really my favorite places to go to.

Hi Punita. I was more impressed with D.C. than I thought I would. It’s a great historical city and a nice place to walk around.

Great tips at the end. I definitely want to see this when I head to DC. I think our history lessons are very different depending on where you learn. My cousins in Texas learned about the Civil War in a very different way than I did growing up in Ohio. Not the same across the board that’s for sure. It’s good to continue the lessons into adulthood and to be open to the conversations and discussions that go along with the lessons.

I’m from Ohio but moved to Texas and I think you’re right about the history lessons! Glad you enjoyed the post.

I’m glad that this museum exists so that visitors can gain an inkling into what life must have been like for those poor people who were enslaved. It’s important not to forget it. We must also try to stamp out modern slavery as too often it is under our noses and we have no idea.

Gosh, yes. Modern slavery is so disheartening and I wouldn’t even know where to begin trying to eradicate it. Thanks for reading, Emily.

The historical museum that walk you back in time are always interesting and intriguing. We have never heard of such a museum which talks about the dark truth of the past, about the slavery. We would definitely want to visit this museum and learn of the past.

I haven’t heard about this museum before, but I’m so glad it exists – I wish we had something like this here in the UK. I’ll definitely go and see it if I’m ever in Washington D.C.

Surprising that the UK doesn’t have something similar!

A dark point in history but one that is so important to face up to. It’s only through our knowledge of what went before that we can expect to change our ways in the present and the future

The African slavery that happened in the USA is very well-known is Europe and I’m so glad that there’s a museum in the USA who reclaims against it and provides the citizens with awareness of it. By the way, those statues look so damn real!

I would love to tell you my favorite thing in DC, but haven’t had the chance to visit it, yet. But I love the city and hopefully will get to go there very soon. I’ll take this suggestion, since I think it is the perfect way to learn more about this period on the USA history. Thanks for all the detail and tips.

You are welcome, Marlene. Thank you for your comment!

Wow…I did not know that about Thomas Jefferson. And having gone through your post, I feel a little disturbed. I can imagine how restless and sad I would feel if I were to see it in person. Kind of like what I feel when I visit the Indo-British monuments in India.

I think it’s important to feel disturbed even at things that happened long ago. Thanks for reading, Ami.

First of all lovely pictures. You have really captured the essence of a place. And the story that you had written is equally soul steering. I never knew Thomas Jefferson had 600 slaves. I did find it bit disturbing. Africans really went through hell 🙁

Thank you, Archana! I’m glad you enjoyed the story and photos.

I enjoyed reading this. My favorite parts are your honesty about your lack of knowledge about the slave trade, our era of enlightenment and how Thomas Jefferson had 600 slaves-a shocker. Don’t know much about American History as its not our focus where I come from. But thank you