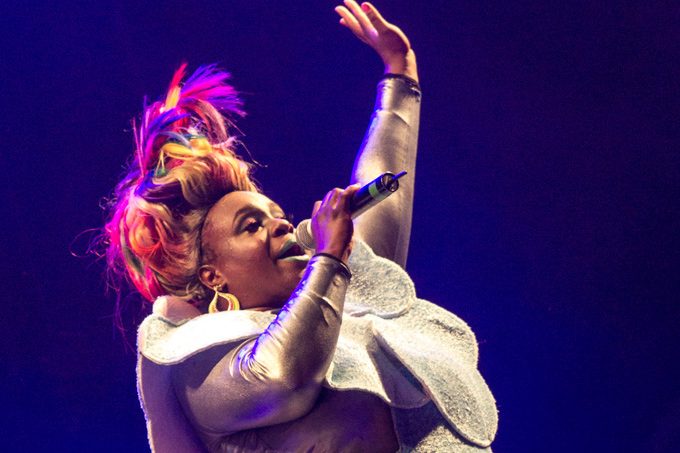 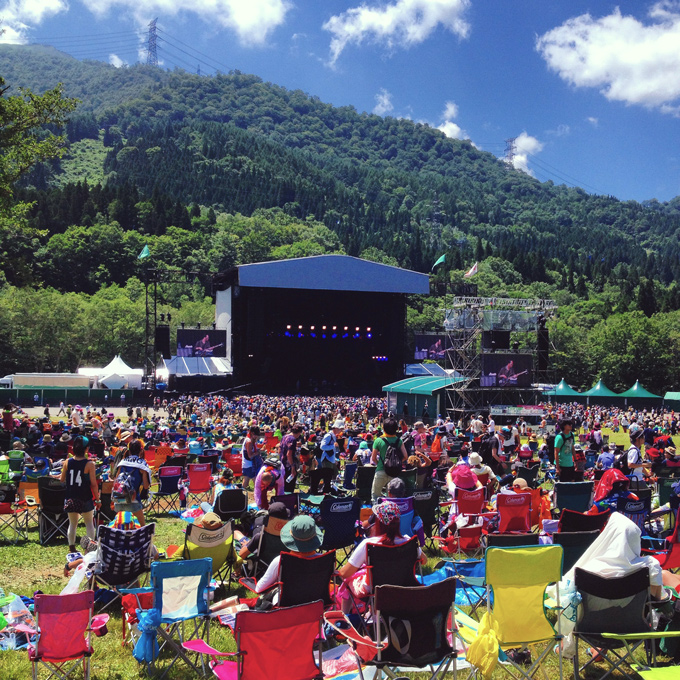 The Fuji Rock Festival was taking place in Niigata at the base of Mt. Naeba, not Mt. Fuji as one would naturally assume. The ride to Mt. Naeba for one of Japan’s largest outdoor music fests was nothing less than picturesque. Rural Japan easily reminds one of Switzerland — towering pines, photogenic fog, covered bridges… 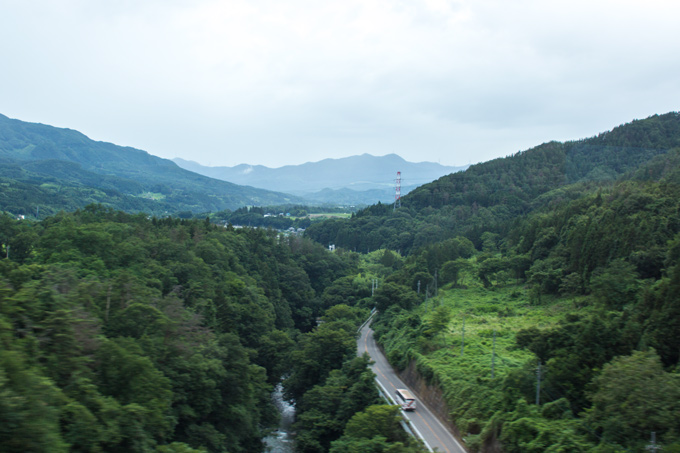 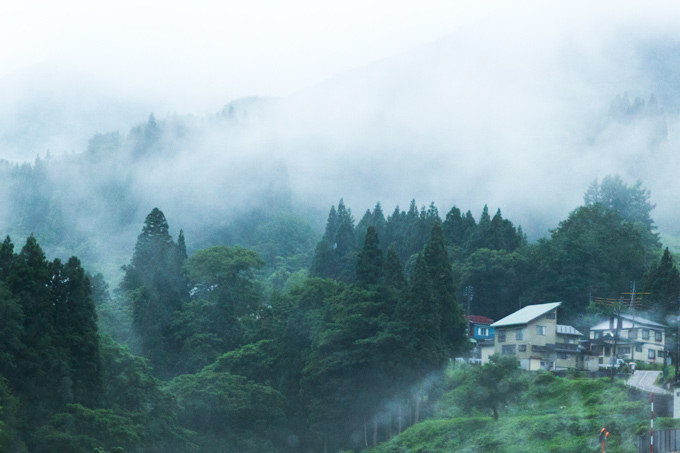 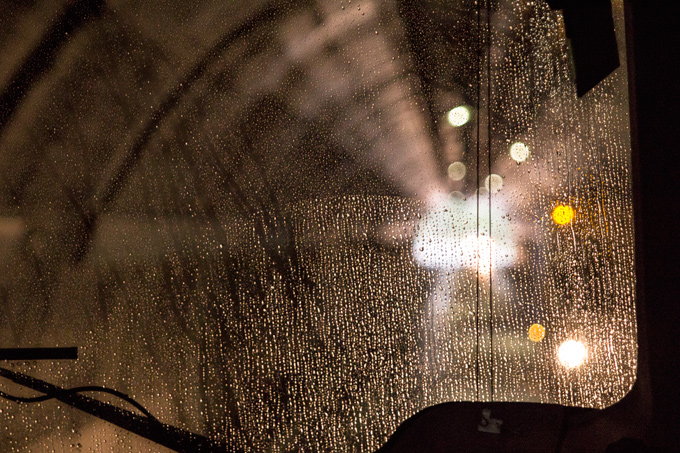 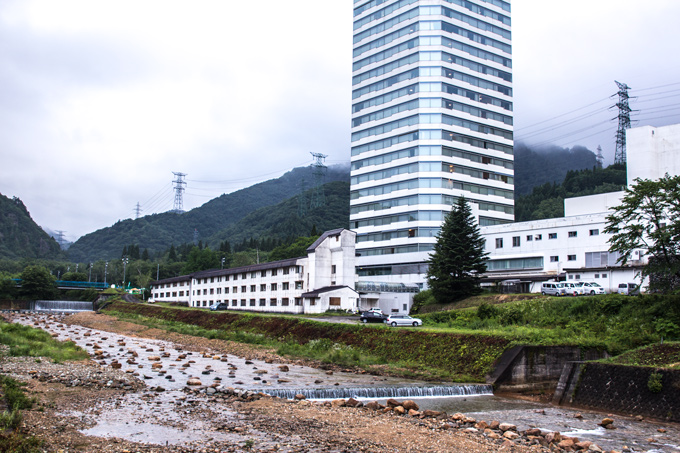 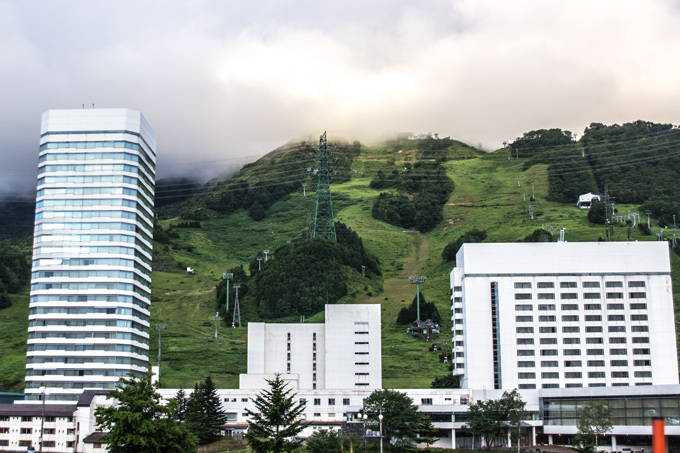 As our bus rolled in to the sprawling white ski resort, I imagined pulling up to the bar and having a cocktail or two with any of my favorite bands who I heard were staying at this very hotel — Bombay Bicycle Club, SBTRKT, Travis, Outkast, Lorde, Flaming Lips, Basement Jaxx, St. Vincent, to name a few. 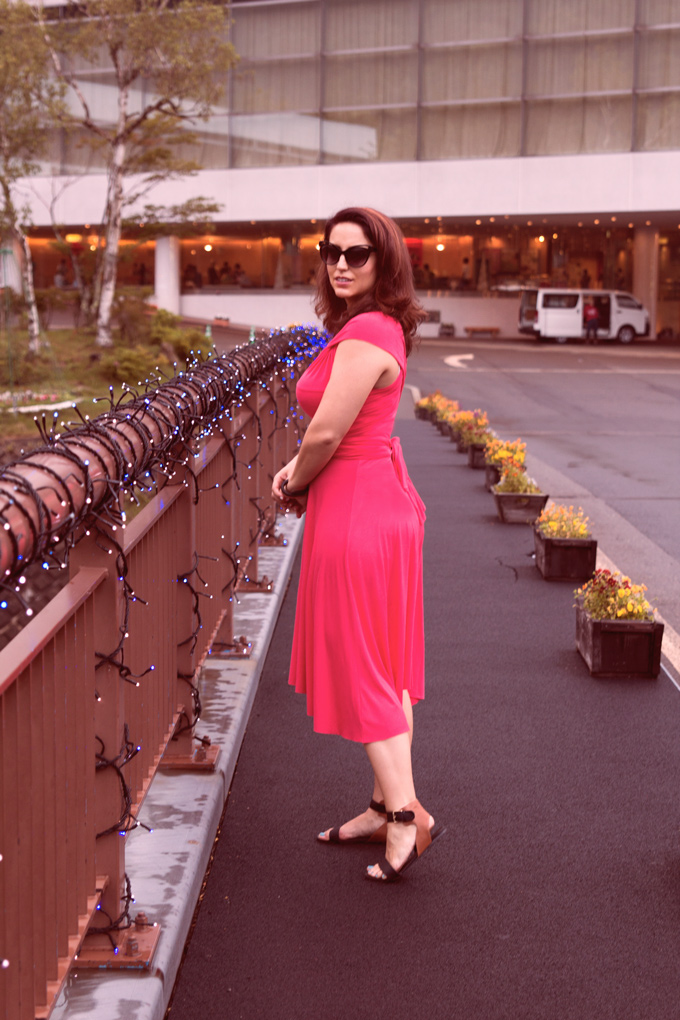 This is Spinal Tap

No wait, this is Fuji Rock. Sorry. It’s hard to tell. Checking into Prince Naeba Hotel was anything but royal. When you’re traveling as a member of the media to a foreign country, delusions of grandeur naturally precede. Or is it just me?

Scrounging for WIFI in the hotel lobby put us in the company of a motley cast of hotel guests, all here for the festival. The highlight was getting hit on by a Keith Richards look-a-like who offered to rescue me from the princess’ tower that is Guam. I declined. Rockers.

He made a second attempt with the smooth opener, “You like octopus?”

“Is that a band?” was my attempt at polite rejection.

Keith dazzled us further by making voice memos about future outfits. I’m paraphrasing, but it went something like, “Black sleeveless vest, fedora…” Hey buddy, you forgot reading glasses. I swear he was an AARP card-carrier. He was a member of a band that wasn’t performing soon enough for my likes. Not as in, “I can’t wait to see you on stage,” as much as, “I can’t wait for you to leave this room.”

The Fuji Rock lineup was a ’90s music lovers dream, starting Friday with British shoegazers Slowdive. Despite having mild success during the My Bloody Valentine-era, it surprised me that the Japanese audience so excitedly embraced Slowdive’s wall of sound. 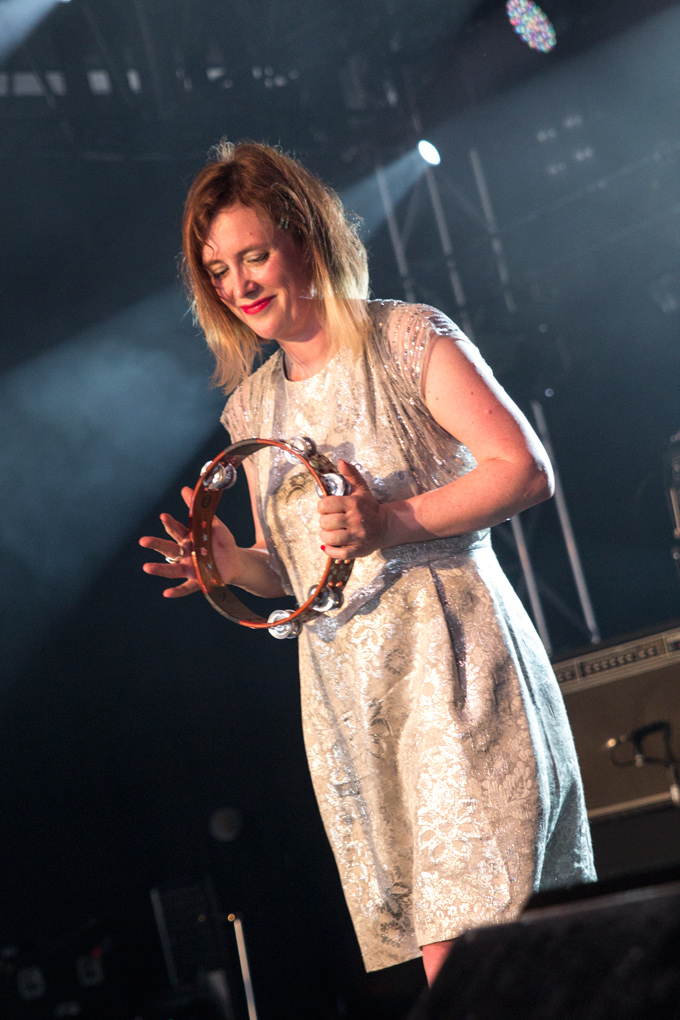 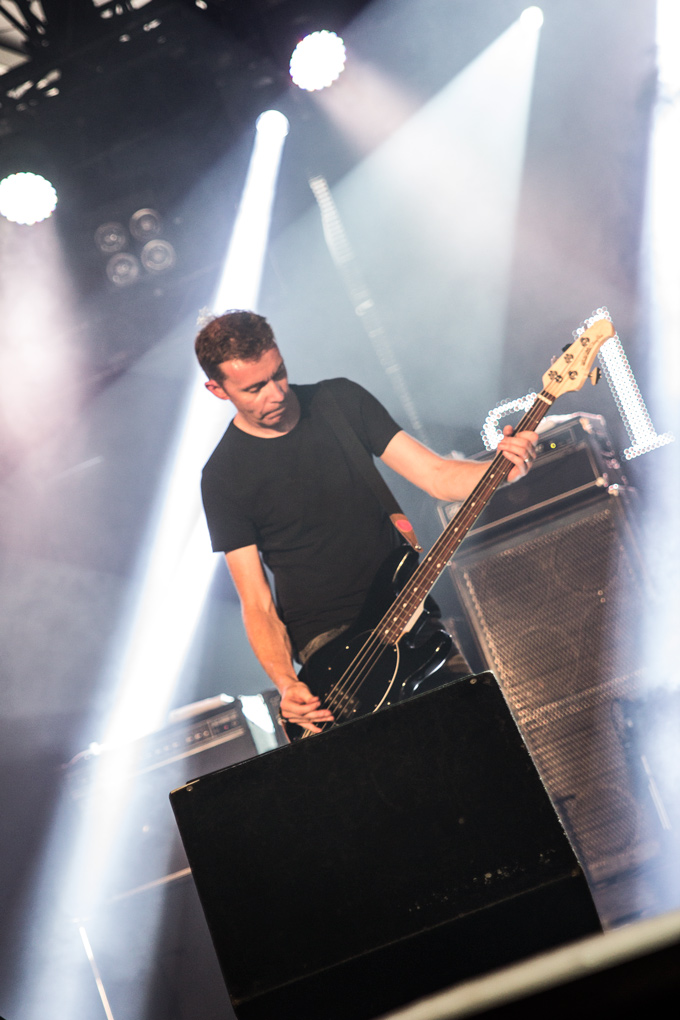 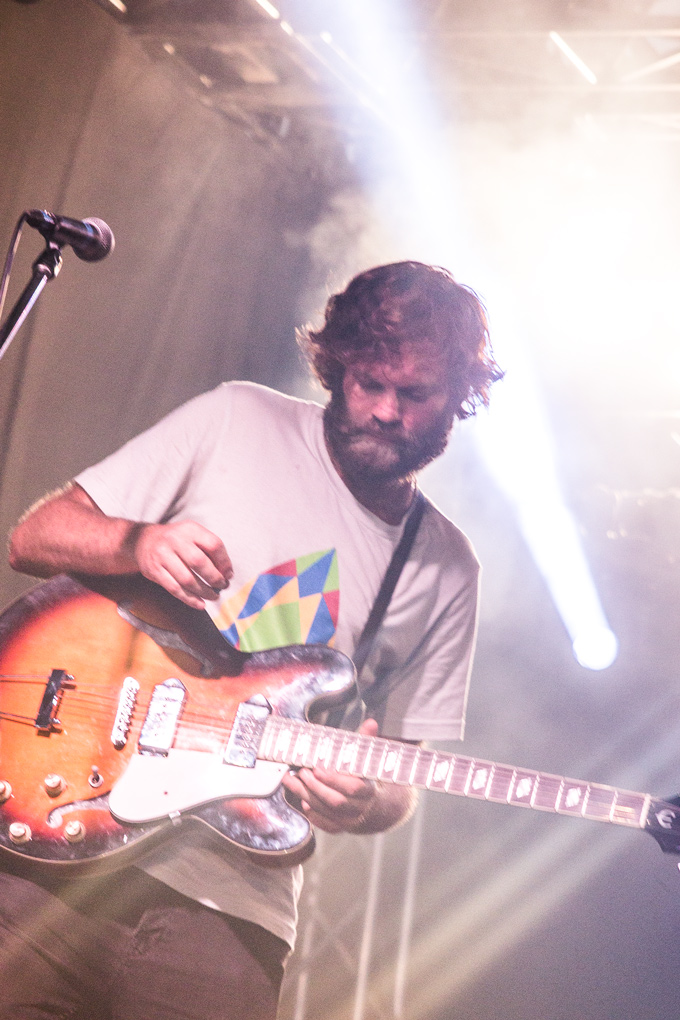 I must admit, not having to elbow my way through the masses was a luxury. Upon doning the neon green mesh press jersey, security attendants were parting the crowds so we could make it to the photographers pit, unmolested. It was lovely. I spent my 19th year as a nascent music journalist and now I was reliving my dream, but as a journalist and photographer, which has a lot more privileges. I wondered if the other three-camera strapped photographers were music fanatics too. I was carrying only one camera and not a very expensive one — my Canon T3i and off-brand lens. No one would believe this was my first rodeo as a photojournalist at a venue this big. 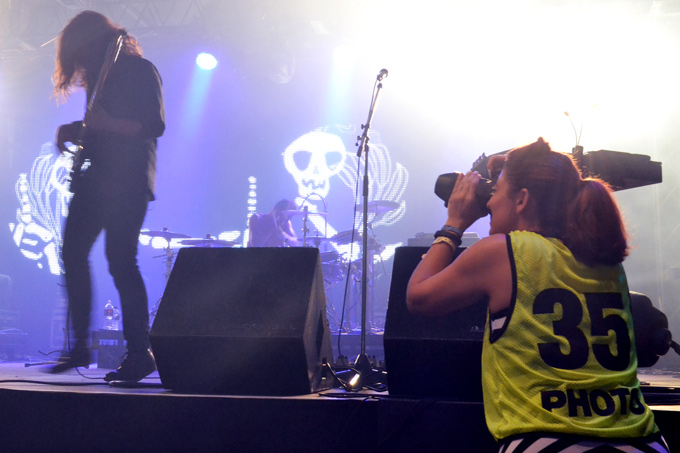 After Slowdive it was time to cover Foster the People on the Green Stage, the largest of the eight. Lead singer Mark Foster bound onto the stage in dangerously tight white jeans, a floral button-up, suit jacket, and swagger to spare. He was in his element. The band opened with “Life on the Nickel” which sent female fans into screaming spasms. Foster tossed back his California blonde bangs like he was the lead in a Molly Ringwald flick. The Brat Pack bravado could be forgiven because the California trio sounded great — melodic, rhythmic with tight vocals, and plenty of Elvis-like swivels in those white jeans. I wouldn’t have left early if Bombay Bicycle Club wasn’t performing in just minutes on the Red Marquee stage. 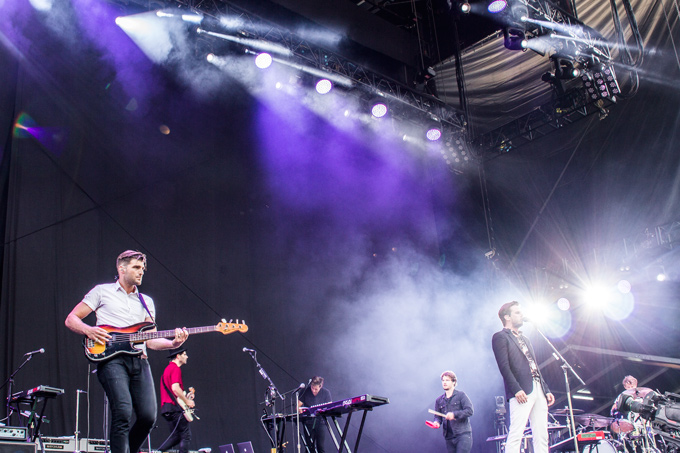 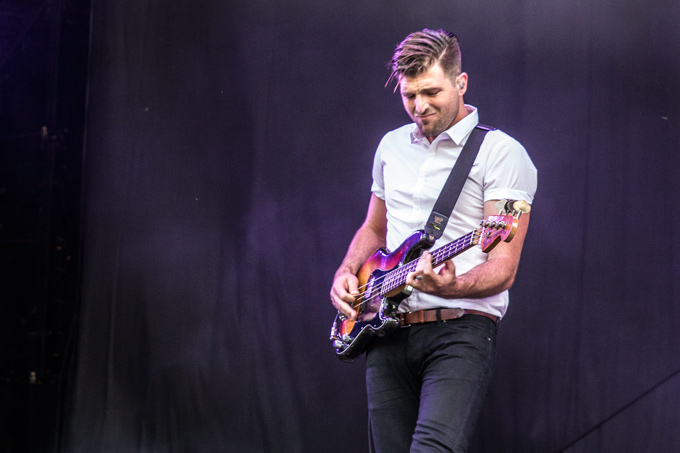 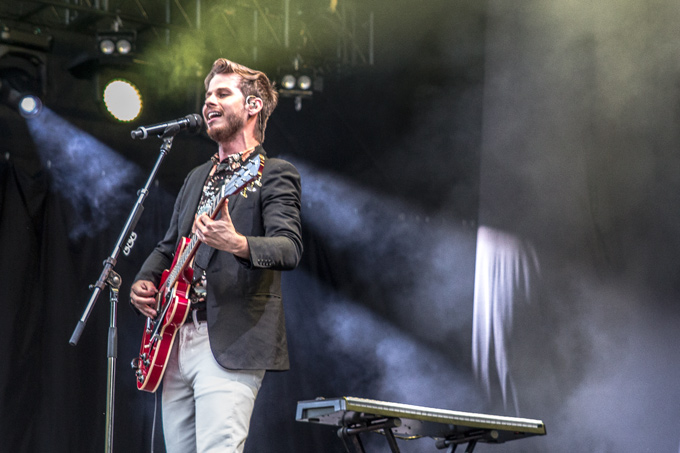 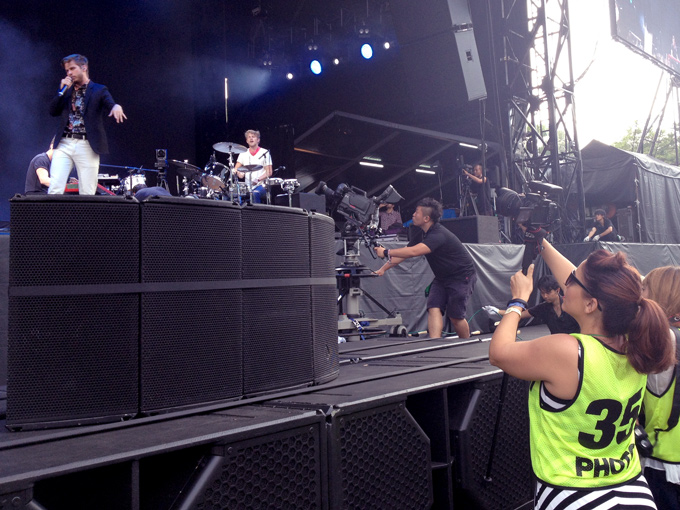 London indie-turned-major group, Bombay Bicycle Club lit up the stage with an energetic and electric performance which included female vocalist Lucy Rose interwining to perfection with those of frontman John Steadman. The band covered the best of So Long, See You Tomorrow, opening with the corker “Overdone.” 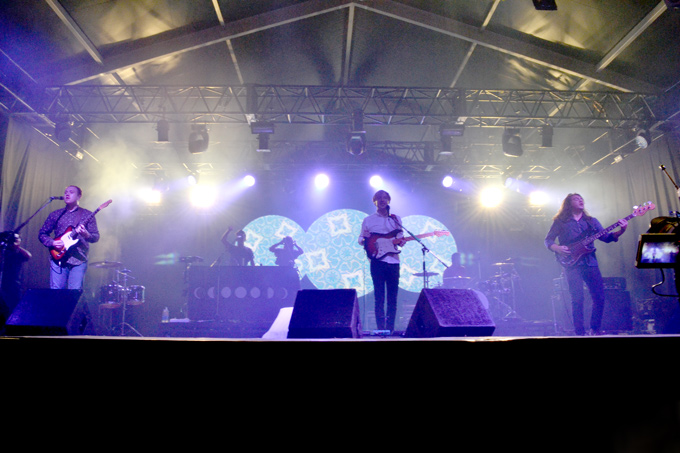 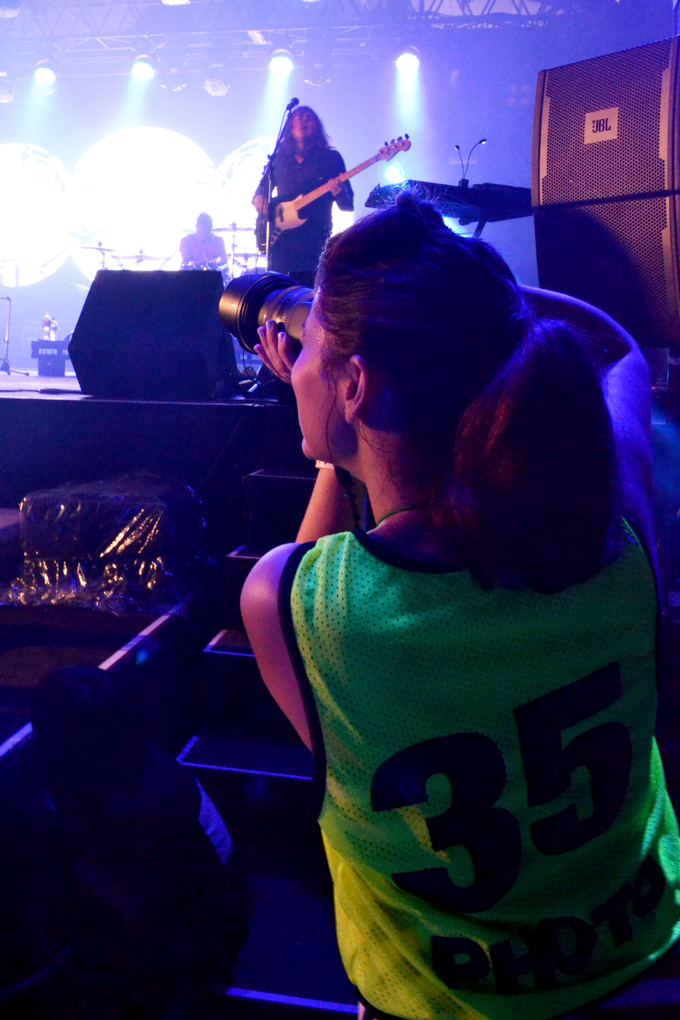 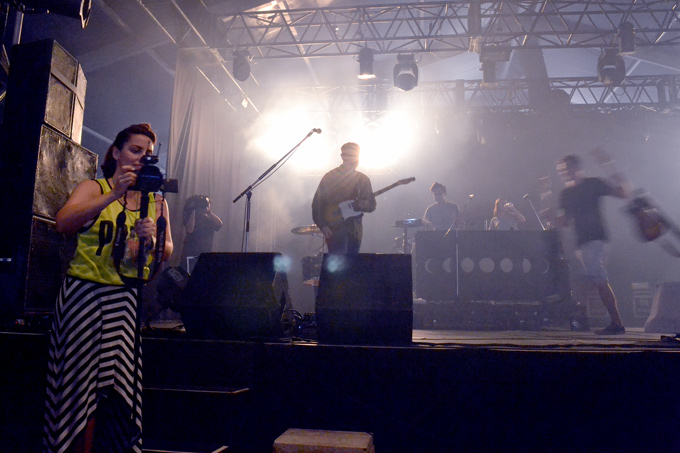 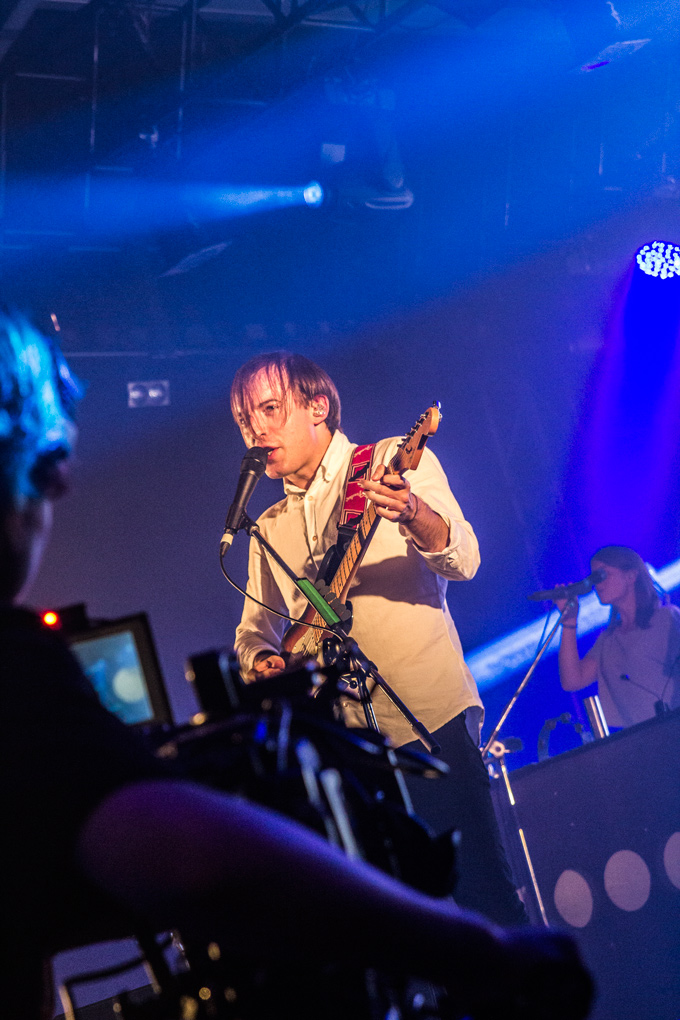 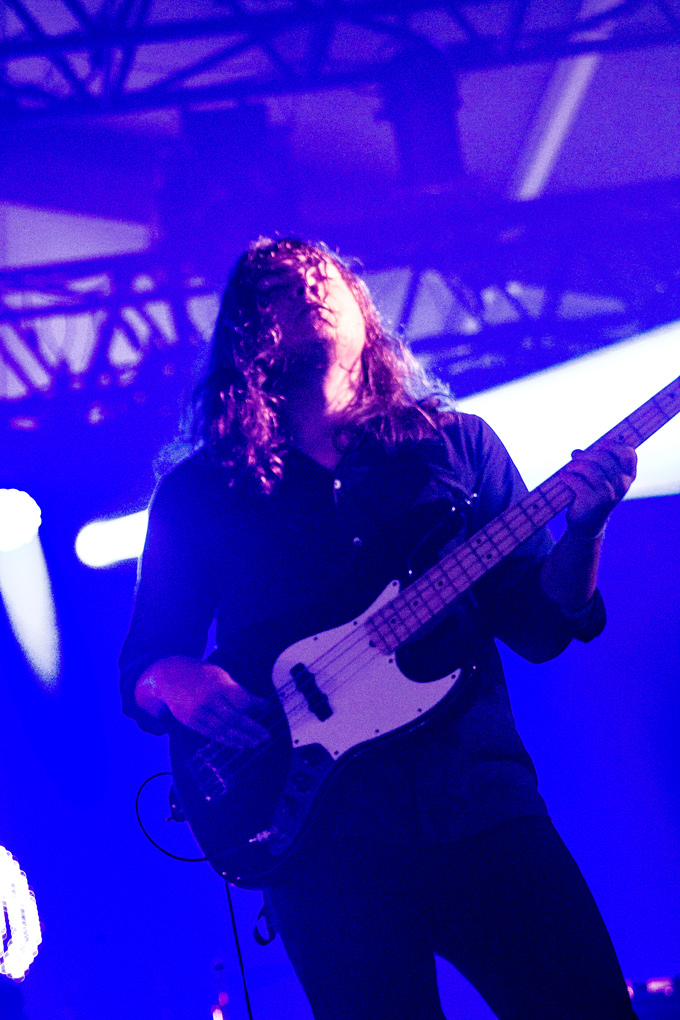 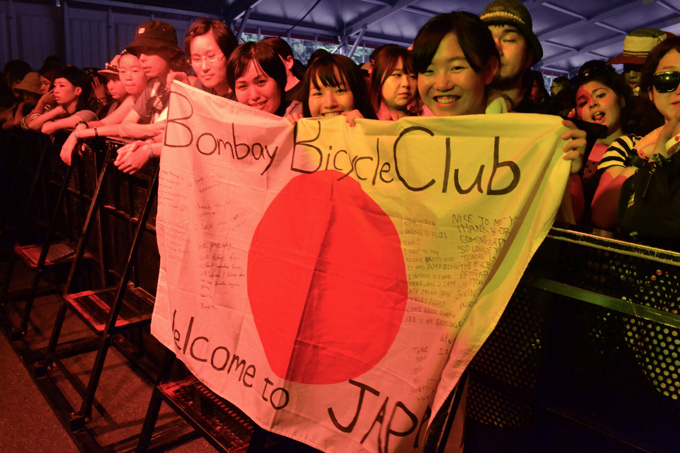 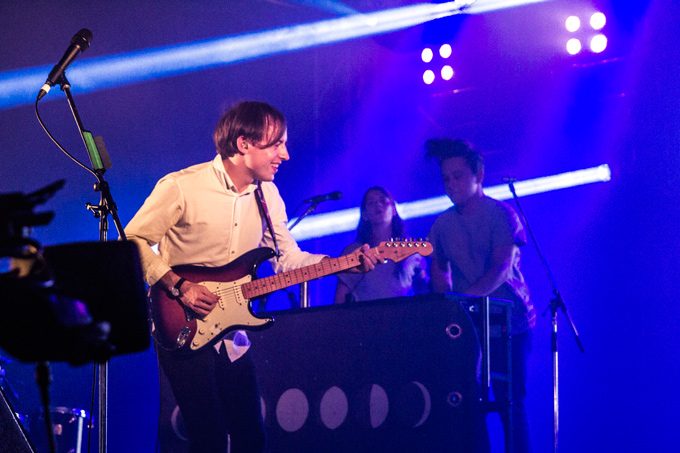 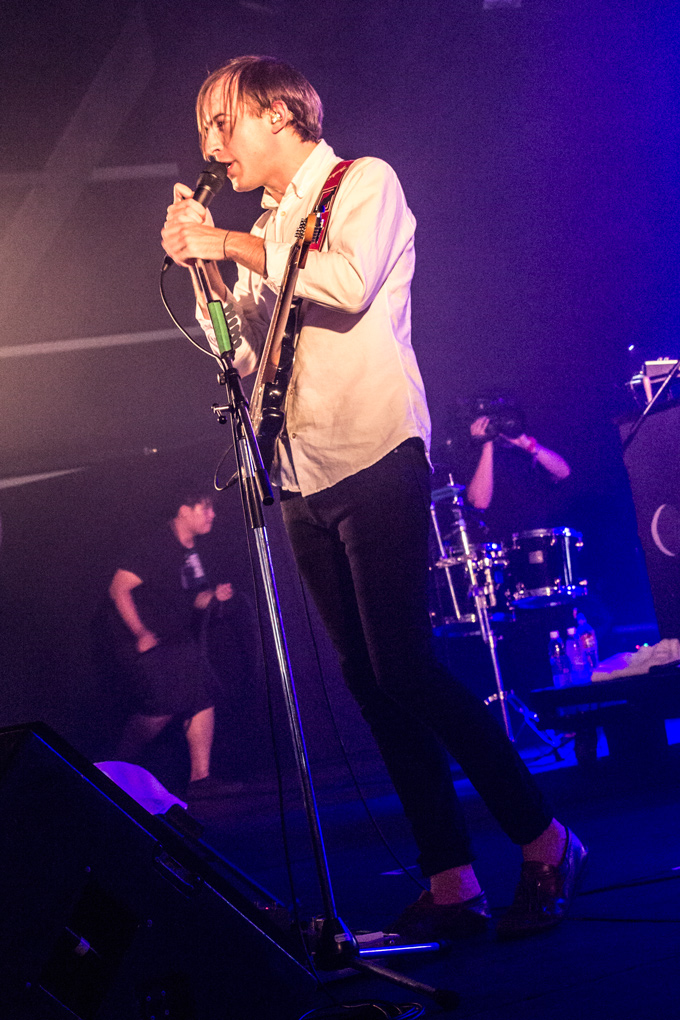 Melane, my assistant and fellow photographer, and I may or may not have snuck backstage post-show to meet Bombay Bicycle Club, who gladly obliged to be photographed with us.

There was nary a party in the ’90s and early 2000’s where Basement Jaxx didn’t occupy a block in the playlist. Still, it wasn’t like I followed the band with any fervor beyond those dance days. In spite of aching feet, stinky pits, and a rumbling stomach, I willed myself to the farthest mega stage to see the British ensemble.

Holy hairdos, Batman! Black and sassy and mega-talented vocalists Sharlene Hector and Vula Malinga (pictured below) occupied the stage and the soundspace of the outdoor stage with flawless vocals and huge sound. In the back of the stage, middle-aged knob twiddlers twiddled furiously bobbing their heads while dressed in Hare Krishna white robes with rainbow stripes. A trumpet player was dressed head-to-toe in a black crow costume despite the summer heat. A ballerina joined the over-the-top ensemble in a perfect juxtaposition of bombastic jungle beats, pointe shoes, and tutus. In a word — fab-uuuuu-lus. 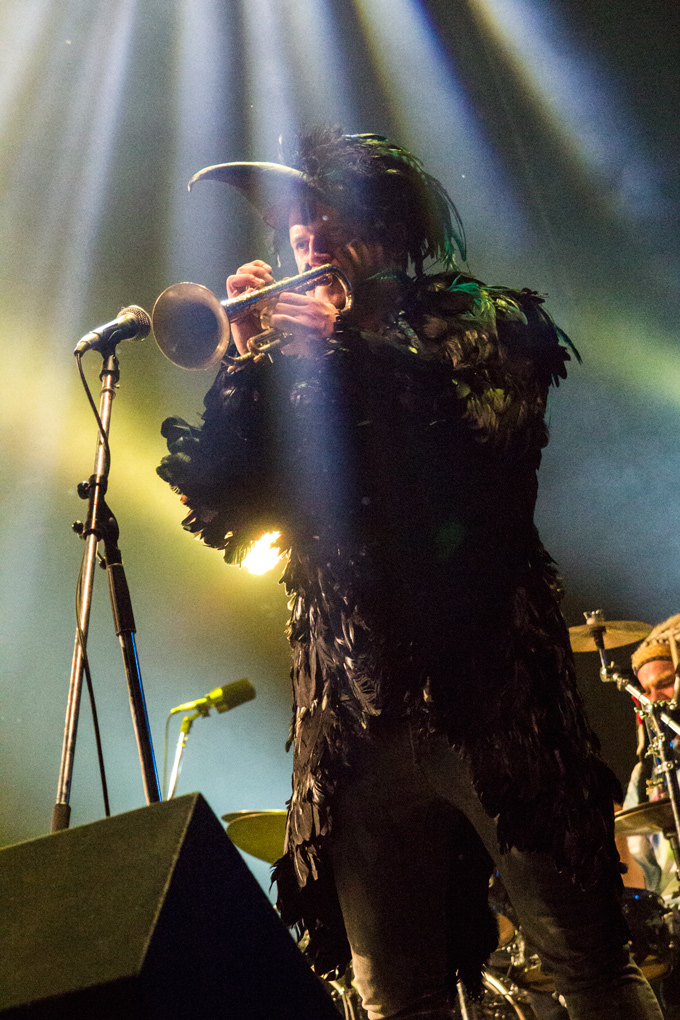 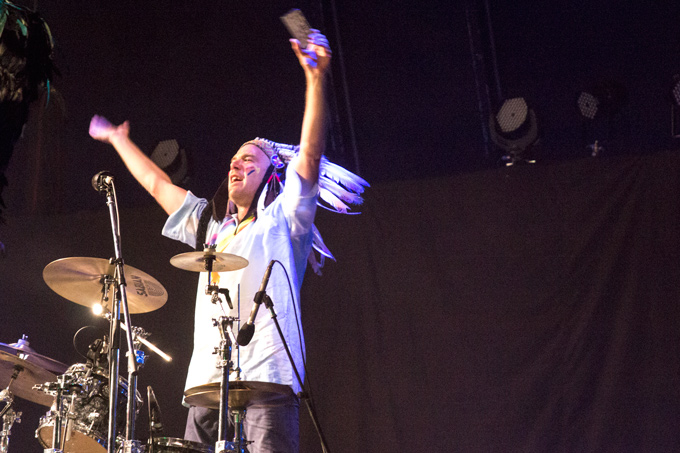 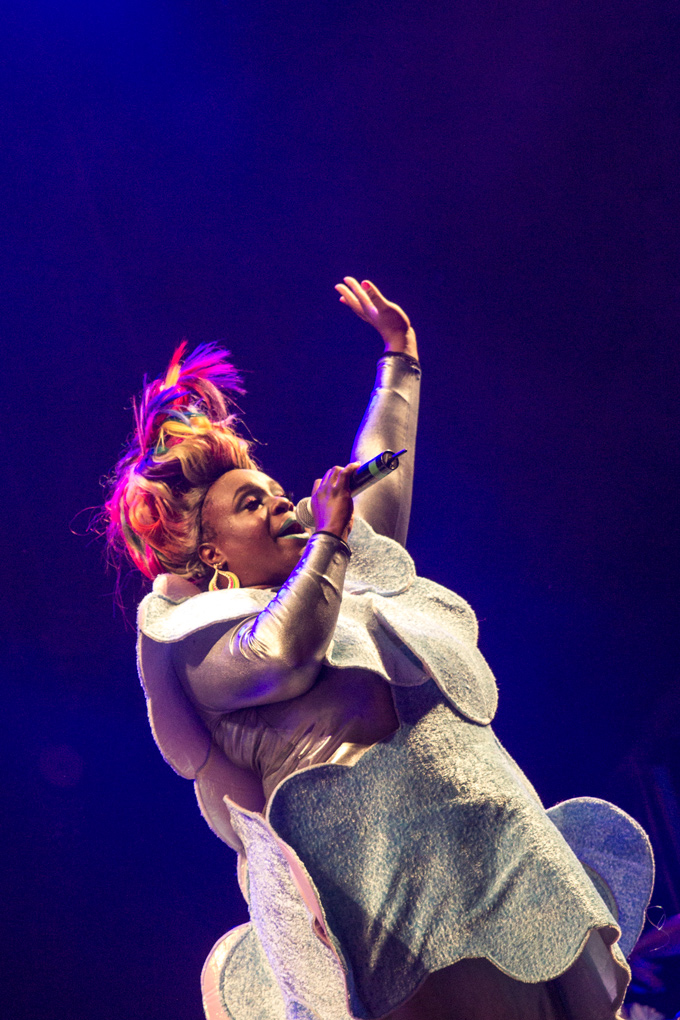 The unexpected brilliance of Basement Jaxx inspired me to walk yet another mile to The Orb show, located just past the Freaks and Hippies stage, a.k.a. the Field of Heaven. You know you’re in for an experience when you see a disco ball installation in the forest. It was admittedly magical, but onward I tread, though dangerously close to exhaustion, alone, and past midnight.

As one progressed to the farthest performance stages, things got hippier and trippier. 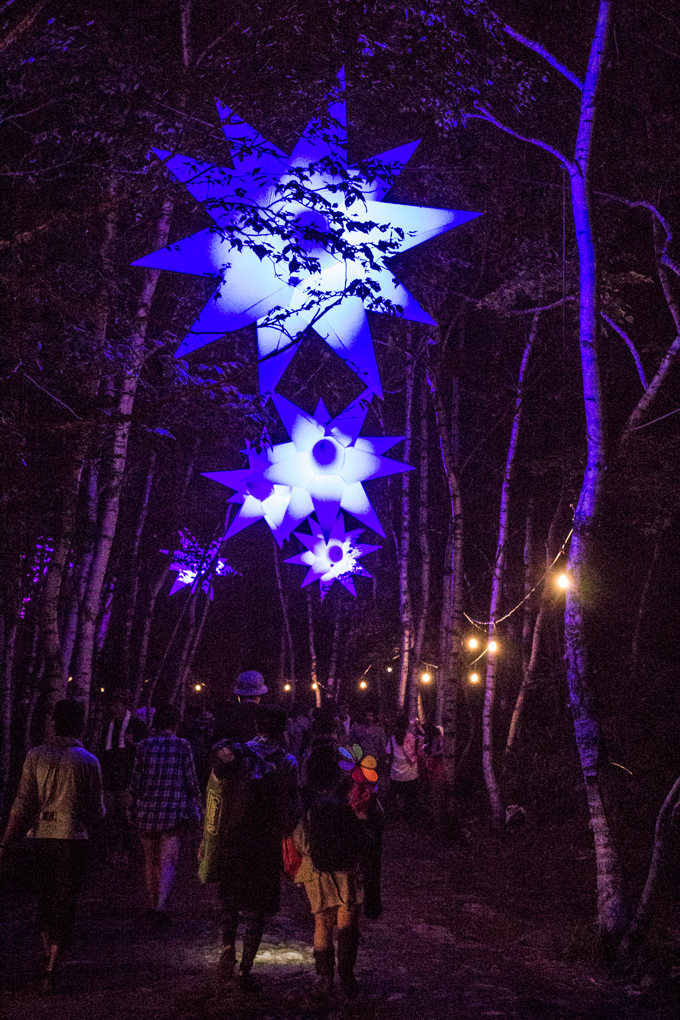 The Orb had not taken the stage on time, so I was entertained by a scantily glad Japanese man working it out on the gravel floor. He was dressed only in a cheek-skimming kimono, a red loin cloth, and a headband. He had achieved Karate Kid-meets the Village People and he was loving the attention. I don’t know if he was high or just inspired. 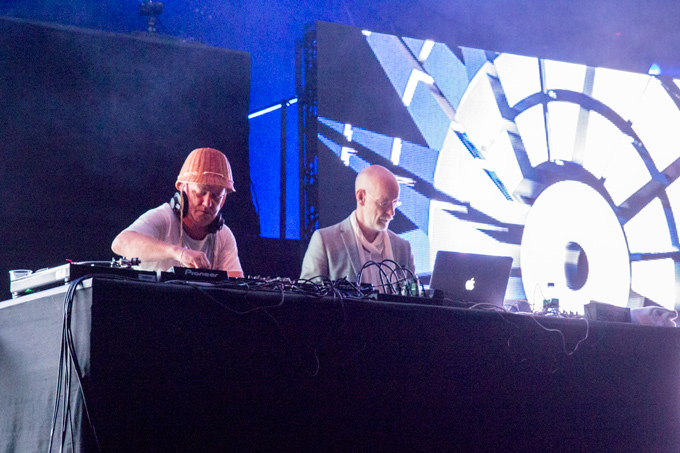 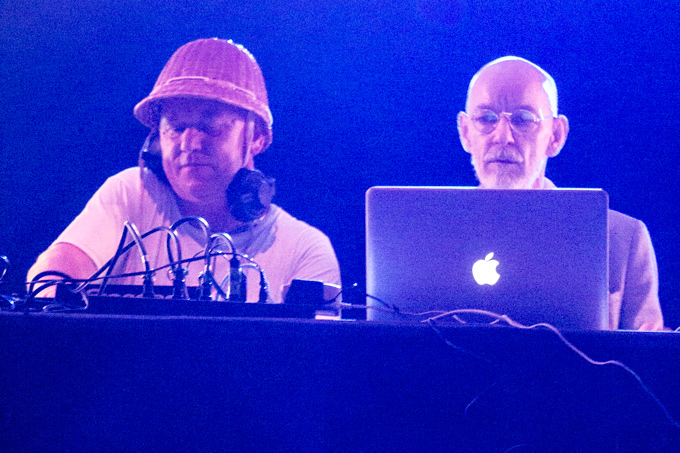 Finally, The Orb took the stage, or should I say, sat down at their deck, upon which a turntable and a Macbook lay. I waited 20 minutes in hopes of “Little Fluffy Clouds” tickling my ears, but alas it didn’t so I made the hour-long trek through the forest to my hotel room, having walked 13 miles that day.

I pushed against the flow of concert-goers on their way to ‘All Night Fuji’ which consisted of trance music and lights. Others along the way were passed out in their micro camping chairs — barely large enough to display a Chihuahua, but adequate for nearly any Japanese rear end. I reminded myself that I too could be camping with the masses but at least had a bed and a shower to return to.