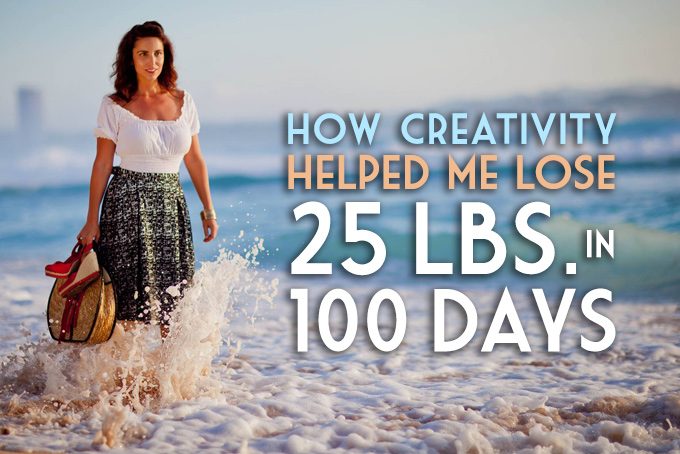 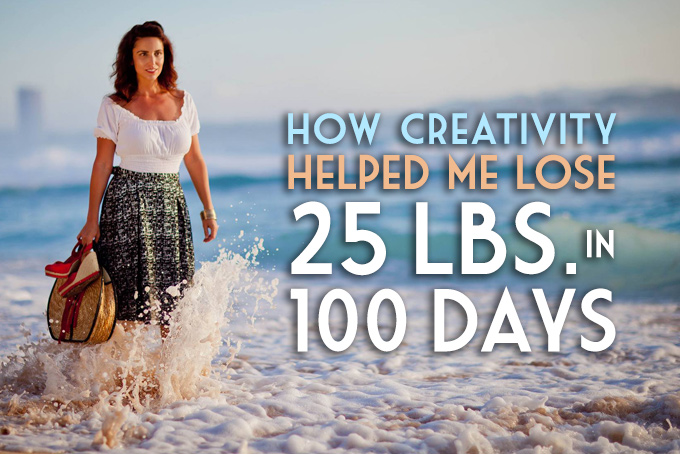 I’m not going to bury the lede here (I have a serious problem with burying the lede. I get all stream-of-conscience like I’m Felicity talking into her tape recorder about Noel or Ben… Ahem, but I digress…) The secret to my weight loss success was creativity! But you knew that because you read the title of this post…

I do need to backtrack a bit though, because the previous sentence makes me a little uncomfortable. I don’t like the salesy connotation of “weight loss success” or the melodrama of “weight loss journey.” I’m not going to try to sell you something to help you lose weight (no shame in that game, I just happen to not have a specific product that will perform such a miracle.) I hesitate to even write about losing 25 pounds for a lot of reasons:

So, I haven’t really talked about it yet, but I lost 20 lbs. I really noticed the difference in this pic from the studio today. Reader poll: Do you want to read about how I did it on Global Girl Travels? #guam #girl #media @theguamguide #travel #photographer #iphone #instagood

(That’s my Beyonce Barbie Arm pose right there. Are you impressed?)

A Few Too Many Disclaimers (Here it goes…)

One more disclaimer: Every human body is different. No two people have the same health history, metabolism, eating habits, exercise routine, bowels, chemistry, etc. What I did worked for me. I won’t even pretend it could work for you because, honestly, I still find it nothing short of a miracle that it worked for me. I dropped 25 lbs. in about 100 days. That has never happened before. Perhaps because I never needed to lose that much. 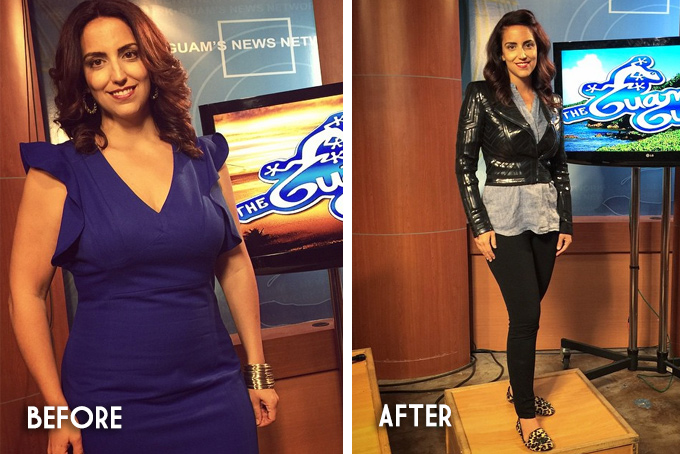 A couple years ago I read an article in O Magazine that contrasted manic excitement and long-lasting happiness. It had this to say about creativity:

…Creative work causes us to secrete dopamine, a hormone that can make us feel absorbed and fulfilled without feeling manic…To get a dopamine “hit,” make something that pushes you to the furthest edge of your ability, where you’re not only focused but learning and perfecting skills.

It was in March when I started working on my first documentary film. It was also in March that the weight started to come off. I was so engaged in the creativity of it all, that I didn’t feel hungry for days. I decided to use that decreased appetite to jump start a diet and workout plan. It seemed miraculous that after five years of weight gain, I could now lose. 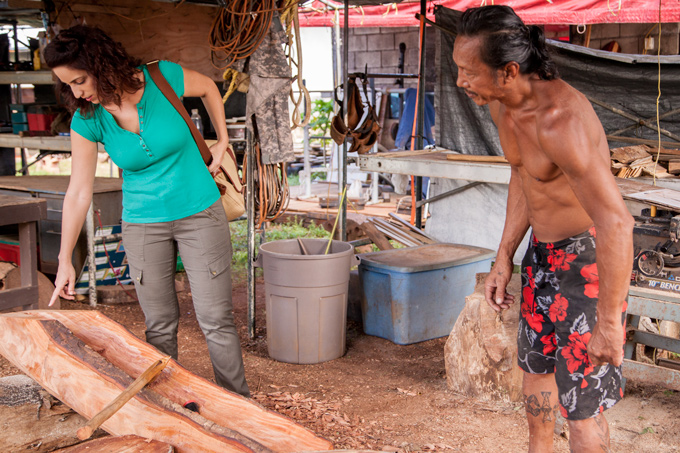 The film has now gone from development to production and I’m still losing weight. I believe this is directly related to having a creatively stimulating and challenging project in the works. This is the first feature-length film I’ve ever produced or directed. I’ve always been a creative person and found myself happiest when I’m discovering or doing something new, whether it be art, music, or travel. Filmmaking requires a combination of all my creative skills and right now, it feels pretty fulfilling to see my work come to fruition this way.

My eating habits have definitely been affected. I don’t crave guilty pleasures as much and I certainly don’t need to eat as much. In fact, I don’t mind skipping a meal here and there when I’m filming (despite the maternal Italian voice in my head that says skipping meals is a sin! “I’m eating enough, Ma, I promise!”). 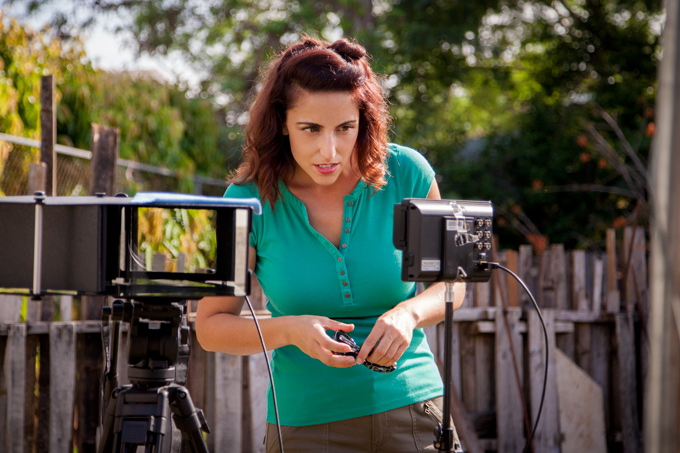 On the set of my documentary film, “American Soil, Chamorro Soul”

A few years ago I bought an Up Band to show me just how inactive I am. As you may know, I’m a web designer and social media guru, so a lot of my work involves sitting. Let’s just say, I spend more time with my iMac than with just about anyone. My Up Band helped me to reach my goal of being more active, to the tune of 10,000 steps per day. It also keeps track of light and deep sleep, which definitely plays a role in weight loss. In fact, I’ve often noticed that I’d lose a pound after a long night’s sleep, especially if I was in sleep debt (always).

I also used an app on my iPhone, My Fitness Pal, to count my calories. Everything I put in my mouth, I put in my app. It helped me see which foods I was wasting calories on. I set a daily caloric goal, which I pretty strictly enforced for about six weeks.

About a month ago, I stopped counting calories and steps. I don’t really need to. The training wheels are off and I’ve made some important and permanent lifestyle changes. Now I just listen to my body and use good sense.

I never liked working out. I’ve done it on and off all my life, but I’ve never looked forward to donning Spandex and running on a machine. I do, however, like being active — hiking, dancing, swimming, etc. I even played basketball for a few years in middle school. I took dance lessons. I loved Zumba. But running… notsomuch. I never thought I’d turn the corner on running, but I made myself do it anyway. At first, it was very hard. My stamina was pretty low and I could only run for three minutes straight. I bought cute workout clothes to motivate me and kept at it.

A key thing I learned is to run at the end of the day, after the sun sets. I’m not a morning person and never will be. My body just doesn’t want to move that fast that early. So instead of fighting my body, I learned to work with it. Running at 7 p.m. helps me release the tension of the day (and it’s a lot cooler too).

[slogan]I now find myself craving my daily run because it’s so clear what the benefits are — my stubborn back muscles loosen up, my stress melts away, my mind is calmed.[/slogan] 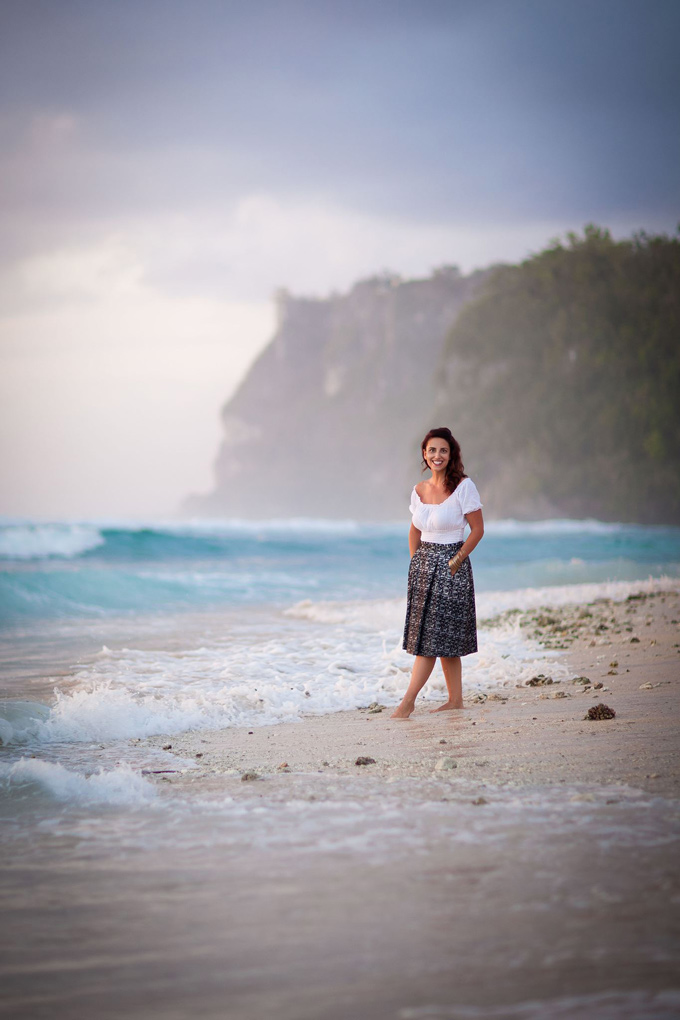 My running gives me the much-needed me-time I need to organize my creative thoughts. In short, I love running now!

I find running at night exciting too. I run in my neighborhood, and if you’ve been to Guam you know there are very few sidewalks. It’s sort of like an obstacle course, which keeps me alert and (literally) on my toes.

The secret to increasing your endurance is to focus on something else. I play my favorite film soundtrack and pretend I’m the (action) character in the movie. My character must run to the end of the block or she will be assassinated by ninja thugs… Okay, not really, but you get the idea. I also learned to focus on the horizon or a distant point. Run in a straight line with your head up and pretend your body is weightless. Go slow at first, focusing on a steady pace rather than a fast speed.

I also threw some Daily Burn workouts into my routine, but I find running to be the most beneficial mentally. I’ve increased my stamina from 3 to 12 minutes of continuous running. I do a brisk walk for the rest of my 30-minute workout.

Losing a big amount of weight on your own can be extremely difficult. www.discovery.uk.com has some of the best personal trainers to get you through this tough time.

In the next post, I’ll tell you which two foods I banned to lose weight and keep it off…

Wow this is really inspiring! it’s nice to hear stories about what works for people in terms of being healthy and even more inspiring to hear a story where no gimmicky product is involved. Congrats on your success!

Such an awesome article! I came across your blog on bloglovin’ and I’m a fan! Just subscribed too! I have a blog about global fashion, and I also love travel and fitness so it’s great to connect with someone who is passionate about similar things! Looking forward to reading more!

Thanks for sharing! I have noticed a huge drop in my appetite with travel. Probably many reasons, but interesting about the dopamine. Running has been hands-down the most rewarding form of physical activity I have yet discovered–especially for the mental and emotional benefits. I’m interested to hear part 2!