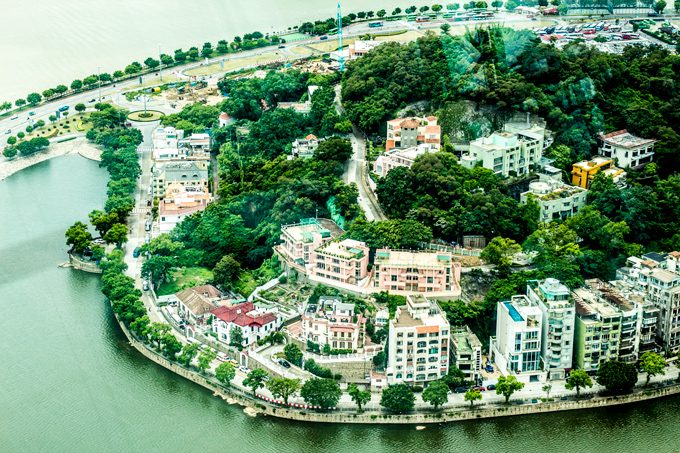 Just an hour-long ferry ride from Hong Kong, Macau is a must-see, must-do destination in Asia. That means that in just 6 or so hours, you could go from Guam to one of China’s most culturally diverse cities! This burgeoning metropolis is relatively safe and is not part of Communist China, but retains the same political status as Hong Kong as an SAR (special administrative region).

With or without a guide, you can see most, if not all, of these sites within a couple of days. I know, because I did! Long billed as a gambling destination, I was surprised to find that Macau is a city rich with European history, having been occupied by the Portuguese for 500 years. One minute you’re in a multi-billion dollar entertainment complex like Sands and the next you’re walking down narrow cobblestone streets in search of hot street food. To call Macau charming is an understatement.

Without stepping foot in a casino, there is plenty to entertain visitors of all ages. See for yourself why Macau receives 30 million visitors a year. It’s so much more than the Vegas of the East! Old Macau is an area that begs to be discovered on foot, camera in hand, belly empty. Start with a visit to the Museu de Macau to learn about the Portuguese colonization of the 1550’s. Our tour guide had a sunnier outlook on the melding of these two cultures, though the early history was admittedly bloody. Still, there is nowhere else in China where Portuguese and Chinese culture so thoroughly co-mingled to produce one-of-a-kind food, architecture, and people. Wander the cobblestone streets all the way to Senado Square, a photographer’s dream pictured at top. See more stops on the historic walking tour. St. Paul’s Cathedral is a hop, skip, and a jump from the museum. The façade was rebuilt after the church was destroyed by a fire during a typhoon in 1835. Directly outside the cathedral was a Chinese installation of brightly colored lanterns. These two symbols illustrate the symbiosis of the Chinese and Portuguese cultures in Macau.
se ice cream! The glam-chic restaurant is one of only nine Indian restaurants worldwide currently starred by Michelin, and is the only one in Asia. This Buddhist temple is situated on the Macao Peninsula and was a last stop for fishermen wishing for safe passage from Macau. It is one of Macau’s oldest temples, built in 1488 and dedicated to Matsu, goddess of seafarers. In fact, the name Macao is thought to be derived from the A-Ma Temple. In 2005, the temple became one of the designated sites of the Historic Centre of Macau on the UNESCO World Heritage List. Serving possible the best sangria I’ve ever had (sorry, honey), it is with earnest that I recommend the unassuming Restaurante Litoral. This quaint Macanese restaurant couldn’t be farther from Macau’s glitzy strip and that’s a good thing. The effortlessly charming decor is classic Portuguese, but the cuisine is decidedly Macanese and according to our tour guide, there is a difference. The Chinese riff on Portuguese food yields caldo verde soup, spicy red rice, and the perfect beverage to wash it down — red or white sangria. I recommend the red. Macau Tower offers the best views of the city and the world’s highest bungy jump. The less adventurous among us (ahem, me) can test our courage as we walk along the glass floor at the observation deck more than 700-feet in the air. From the tour, you can admire the pastel colored buildings and even see the under-construction Hong Kong–Zhuhai–Macau Bridge that will be the world’s longest at 31 miles! The tower also offers dining, shopping, and entertainment. Holiday Inn’s first 5-star hotel lives up to the rating with impressively chic everything. The 1,224 guest rooms are outfitted with all the creature comforts you need, including free WIFI, shower and soaking tub, which you’ll use liberally after pounding the cobblestone streets of Macau. You even have the choice between soft and firm pillows. The Holiday Inn staff was incredibly responsive to my every need and delivered the toiletries I requested within seconds. And did I mention the Zen glam Bodhi Spa which offers indigenous Australian stone therapy?

The world’s largest Holiday Inn is a multi-award winning integrated resort, meaning it shares real estate with Conrad and Sheraton hotels and is across from The Venetian. Cotai Central Shops are footsteps away with lots of entertainment and dining options for travelers of all ages. DreamWorks Shrekfest may seem like a kiddy activity, but (excuse the cliché) it really is fun for all ages. Truth be told, I’m not a Disney fan, so I was skeptical of Shrekfast, a breakfast-meets-photo opp with Dreamworks characters. I’m glad to report I was dead wrong about the enjoyability factor. I found myself behaving like a giddy fan at the site of Puss ‘n Boots, Shrek, and friends as they marched from stage to table to greet admiring kids, and in my case, adults. All your favorite DreamWorks characters from “Shrek”, “Madagascar,” “Kung Fu Panda”, and “How to Train Your Dragon” perform. The buffet had a great variety of movie-themed breakfast food that was also quite tasty. This ultra modern shopping mall is at the center of three Sands properties. The Shoppes at Cotai Central has an indoor three-story cascading waterfall, rocky cliff faces and lush plant life along with 140 shops of first-to-Macao and famous international brands that spread across a retail space of 400,000 square feet. Families can take a break at one of the 17 restaurants or enjoy a wide selection of cuisines from the 23 stalls at the 700-seat food court, Koufu. The Shoppes are also the place to see the DreamWorks parade, which features characters from “Shrek” and “Madagascar” and is free daily. This glamorous Chinese restaurant offers upscale dining and serves up classic dishes with an emphasis on seafood. Linger at Dynasty 8 (the menu is 19 pages long!) and enjoy the chic dining room and bottomless hot tea. Private dining rooms are available. Reserve ahead.

Gondola Ride at The Venetian There’s much to see and do at The Venetian — shopping, live music, dining — but you can’t leave without being serenaded by a (real) Italian on a gondola. Tickets are required, so plan ahead. The gondola circles the indoor canal at The Venetian so no need to worry about the weather! Located at The Venetian (yes, like the one in Vegas, but two times bigger), Golden Peacock is a must-eat in Macau. Not only is the decor drop-dead gorgeous, the menu offers just the right balance of modern and classic Indian dishes for both meat lovers and vegetarians. Every angle of this restaurant sparkles, but we recommend you sit facing the glass-walled kitchen to watch the tandoori oven in action. Inventive chef Justin Paul uses 28 spices flown in from India including ground rose petals for the rose flavored ice cream.

Travel sponsored by United Airlines. All opinions my own.