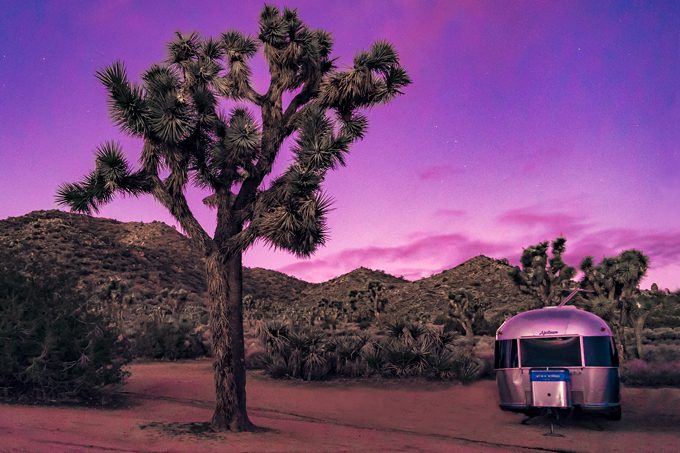 I had never been to Joshua Tree National Park before we arrived in our Airstream in January. We started our Great American Roadtrip in the Airstream in October 2016 and had criss-crossed the country by the time we arrived on the West Coast.

Joshua Tree was our first stop after crossing the Arizona–California border. We drove for long stretches down a two-lane road through the Mojave Desert, passing only a handful of cars. The road appeared to lift up into the sky at one point. As we neared the town of Twenty Nine Palms, we saw junk houses, mostly abandoned and reclaimed by the sand. It was a colorfully post-apocalyptic scene with the ghosts of residents past juxtaposed with a fresh crop of squatters and die-hards. Dead trailers, boats, and cars littered tiny roads named after owners.

Twenty Nine Palms, where our campground in Joshua Tree was located, had a quaint and low-key suburban vibe. We stopped to pick up groceries there and not much else.

We pulled into Black Rock Campground, less than a mile from the main road, to claim our spot in Joshua Tree National Park for the night. There were no hook-ups for electricity or water, but our Airstream is built for going off-grid. In January, temps were in the 40s, so I happily donned my new down coat, one of my first post-Guam purchases. Find RV parks and campgrounds near Joshua Tree.

The next morning, we rose at the crack of dawn to capture some timelapse photography of the trees and sky. I was rewarded with a sunrise rainbow, which is every bit as fantastic as it sounds. I had never seen one, especially in a bright pink sky over a national park.

The Joshua Trees are pretty enigmatic. They feel almost human in their poses, no two trees alike.

After doing a live stream from my drone, I set out on a spontaneous five-mile hike on my own. I stopped to admire the frothy San Gorgonio Mountain in the far distance. Wild hares dashed across my path, but no sign of the coyotes I heard so clearly the night before.

My hiking path started out flat, but then wove through steep and dusty foothills. A handful of other hikers passed me at first, but then I realized I was definitely off the beaten path. I retraced my steps to find I had wandered past a poorly marked curve on the trail. Phew! That was a little nerve-wracking. I slid down a dusty hill, holding my camera dearly, and hoping I wouldn’t fall.

I stopped for photographs every time I saw a pretty piece of bark, a knotted tree trunk, or a bristle brush yucca plant. As I entered the flatlands again, I heard a group of noisy teenagers behind me and quickened my pace. Am I a miser for wanting to enjoy nature alone and in utter silence?

The sun was nearly setting when my husband texted me to see if I was okay. I told him I was fine, but at that point I was definitely heading off the trail home. I wasn’t scared or worried, but didn’t want to be wandering around in the dark. I retraced my steps again and saw an Airstream in the distance. It wasn’t ours, but at least it signified civilization.

I returned to my trailer exhausted but happy and with more incredible images than I can edit. 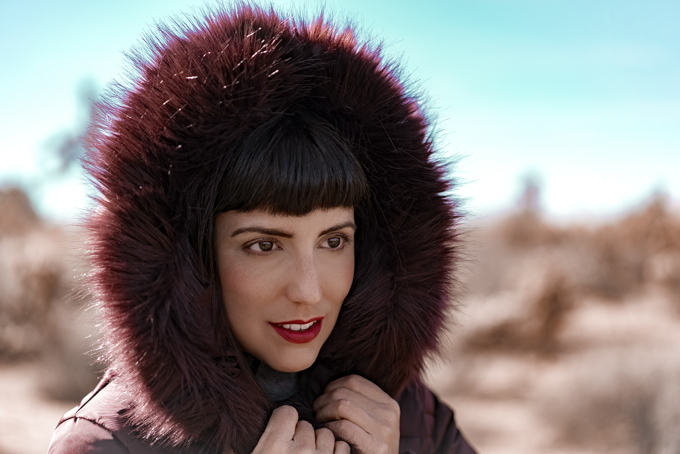 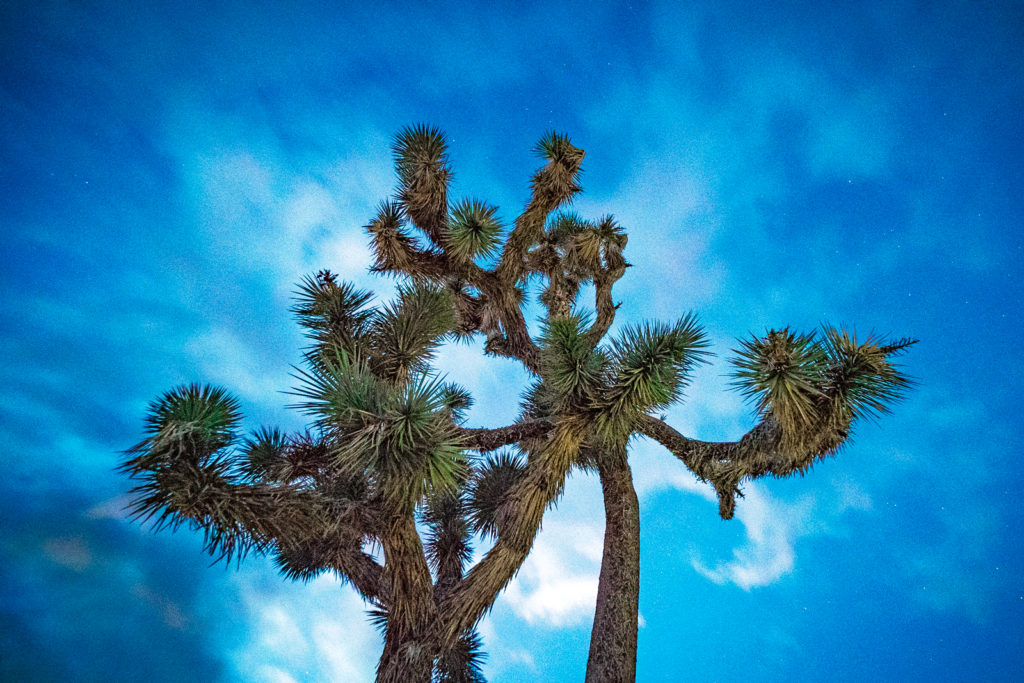 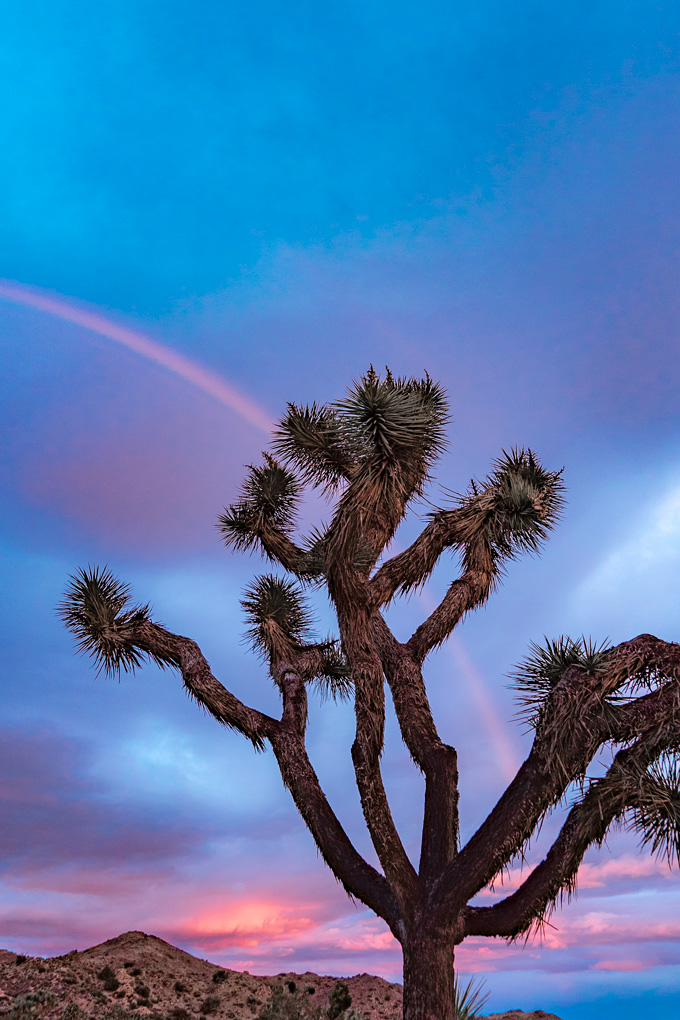 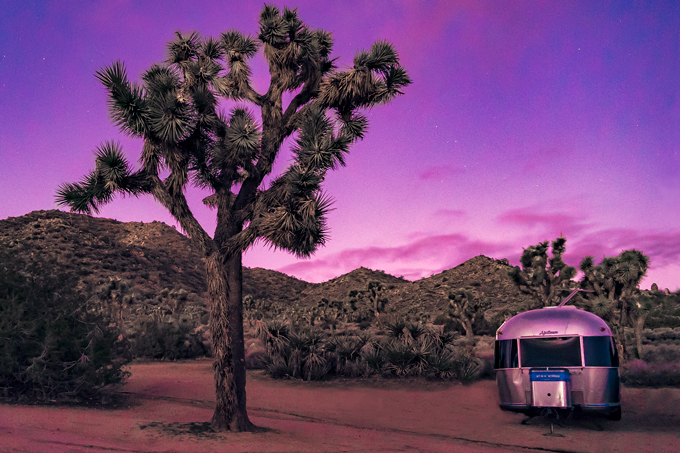 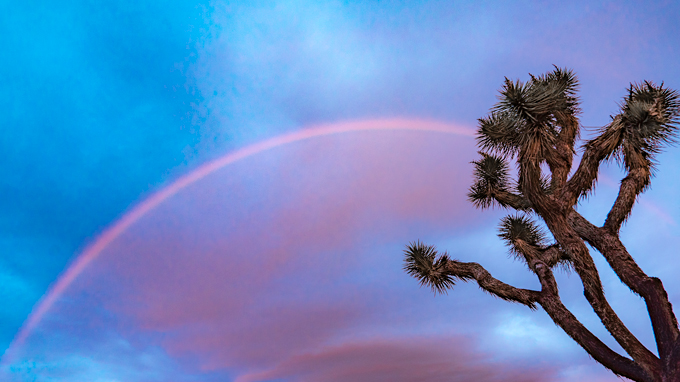 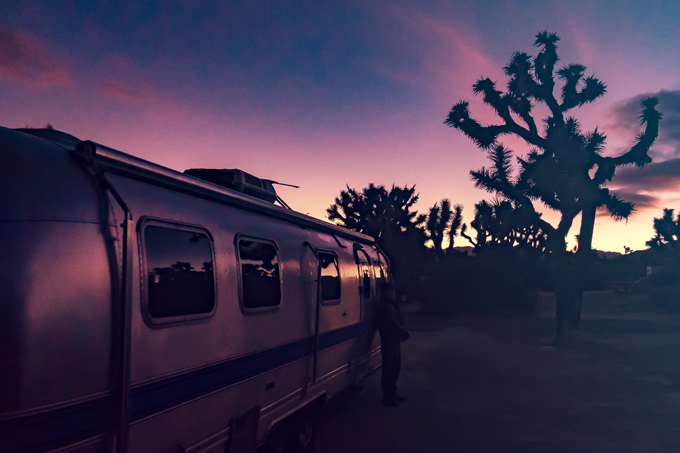 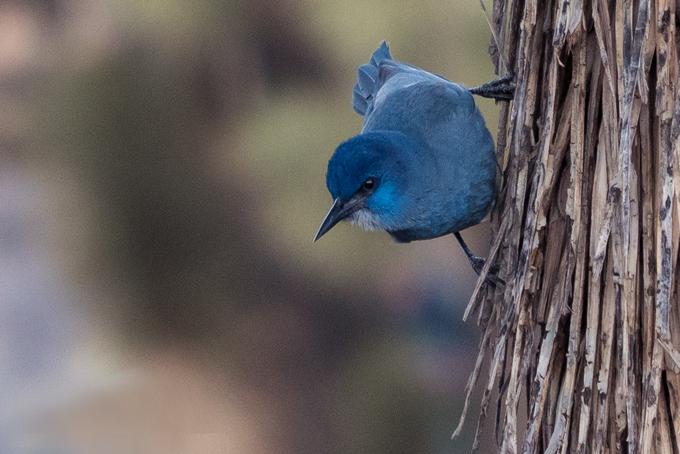 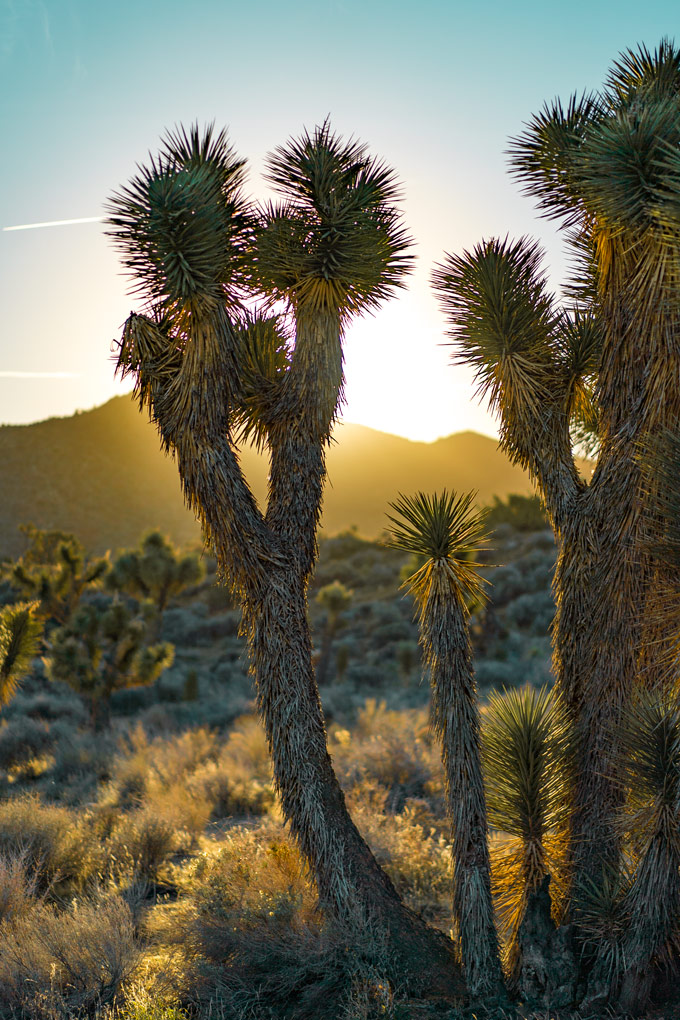 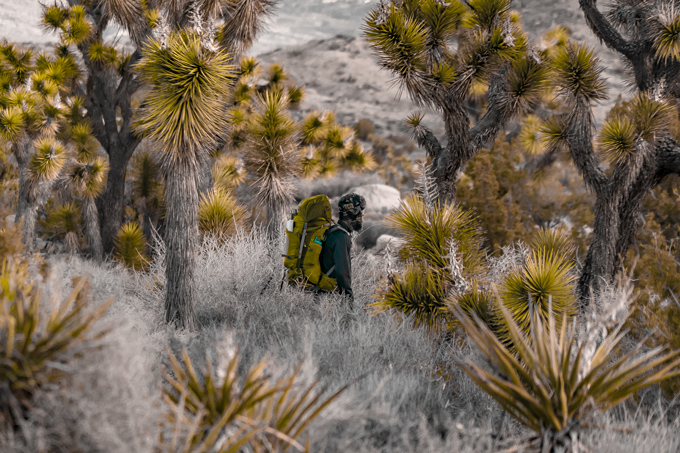 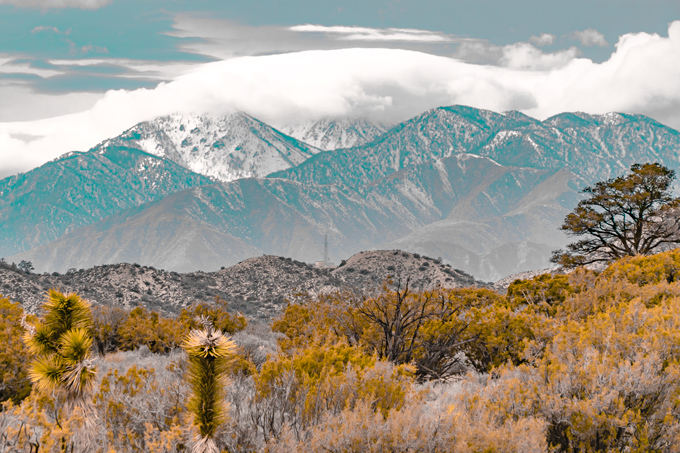 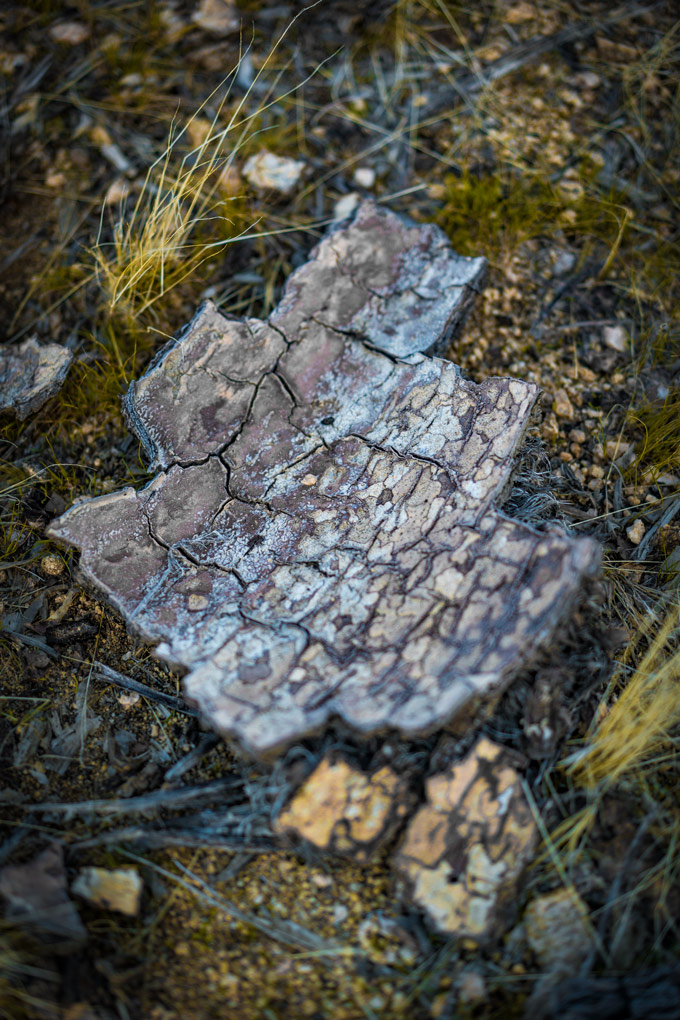 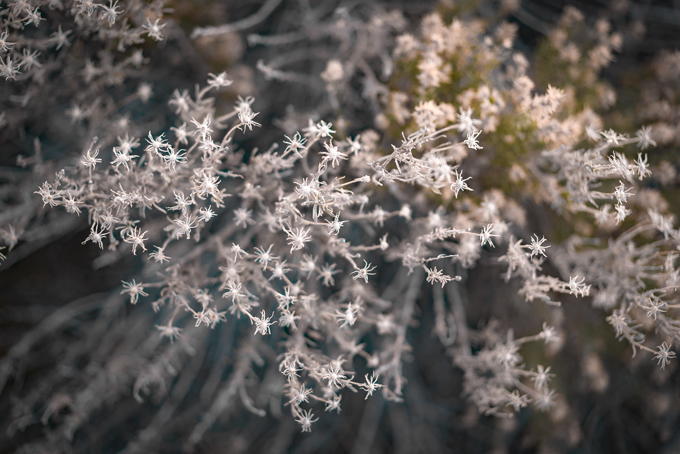 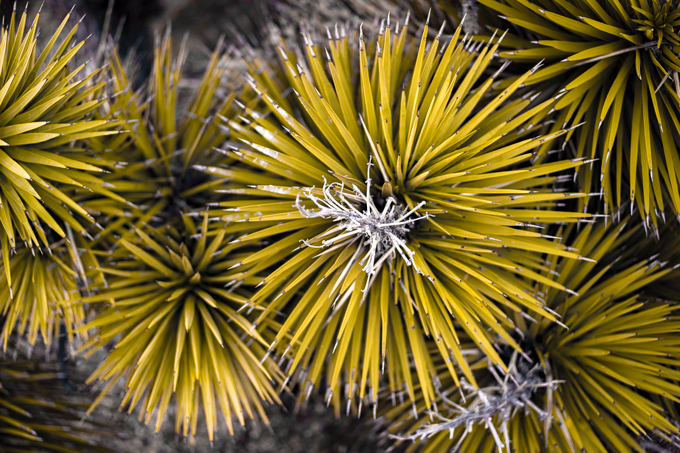 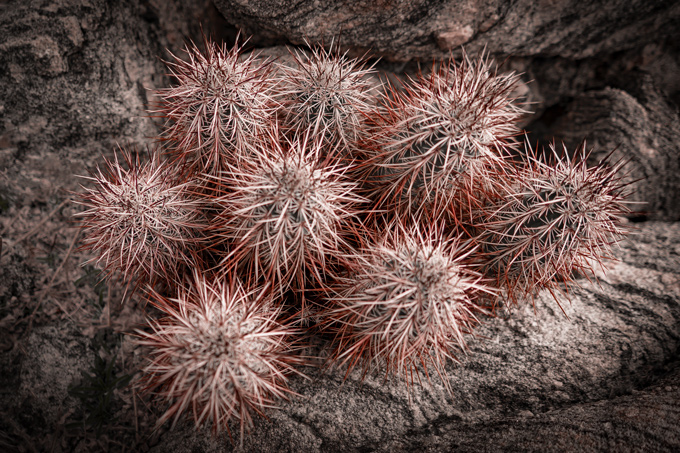 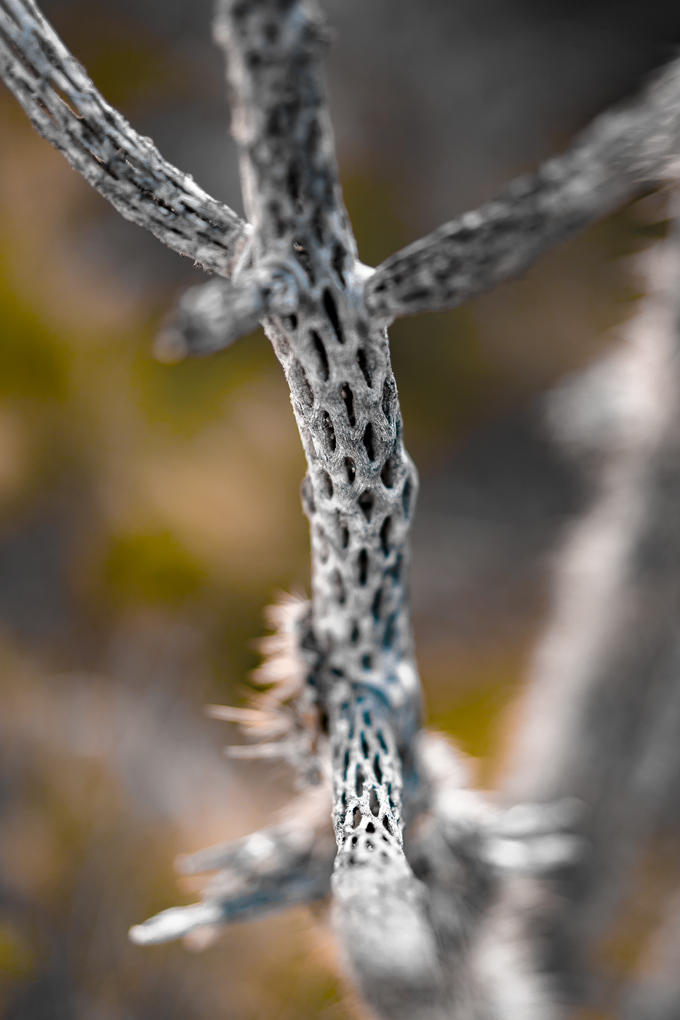 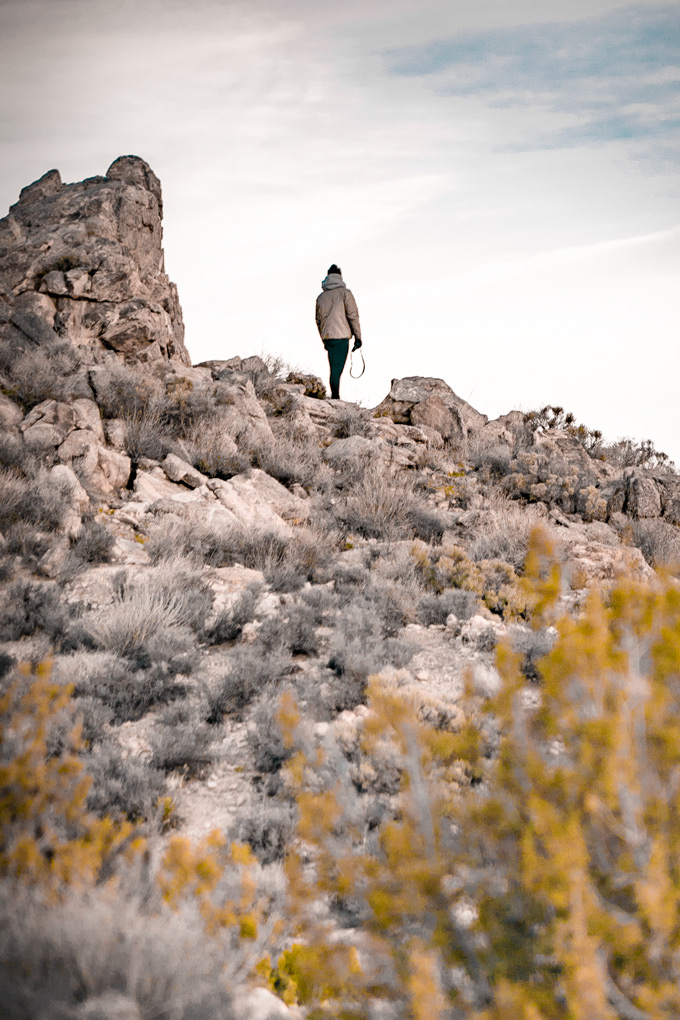 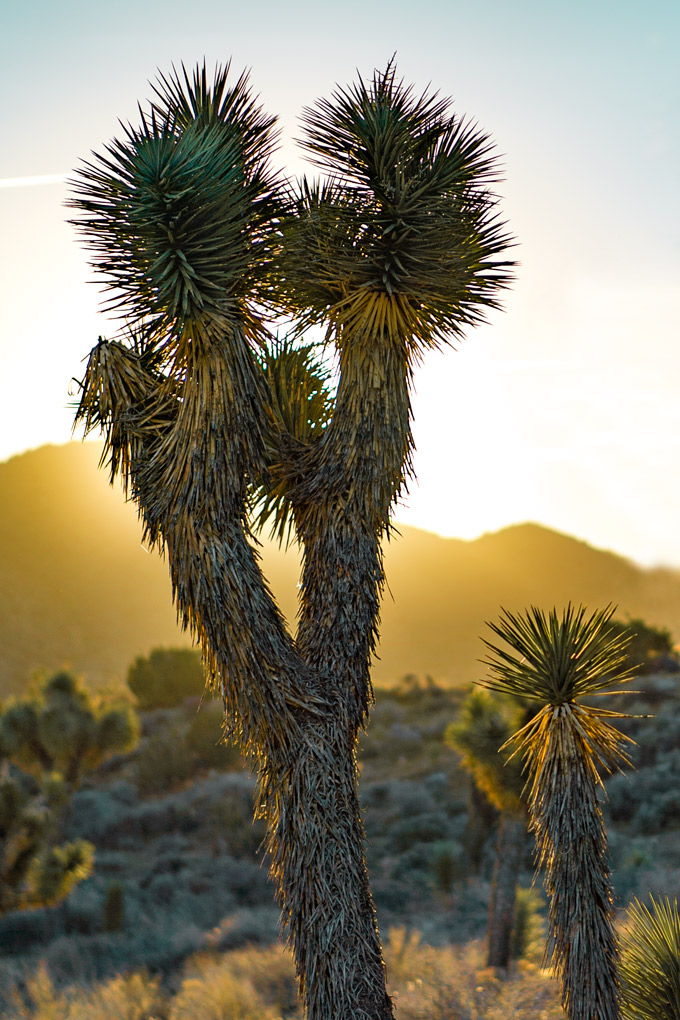 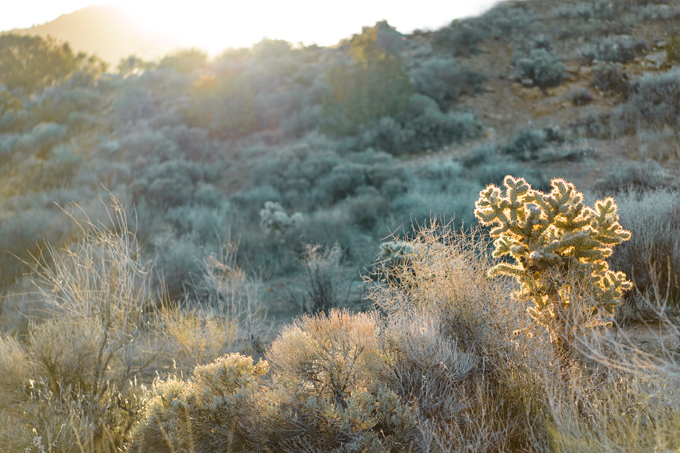 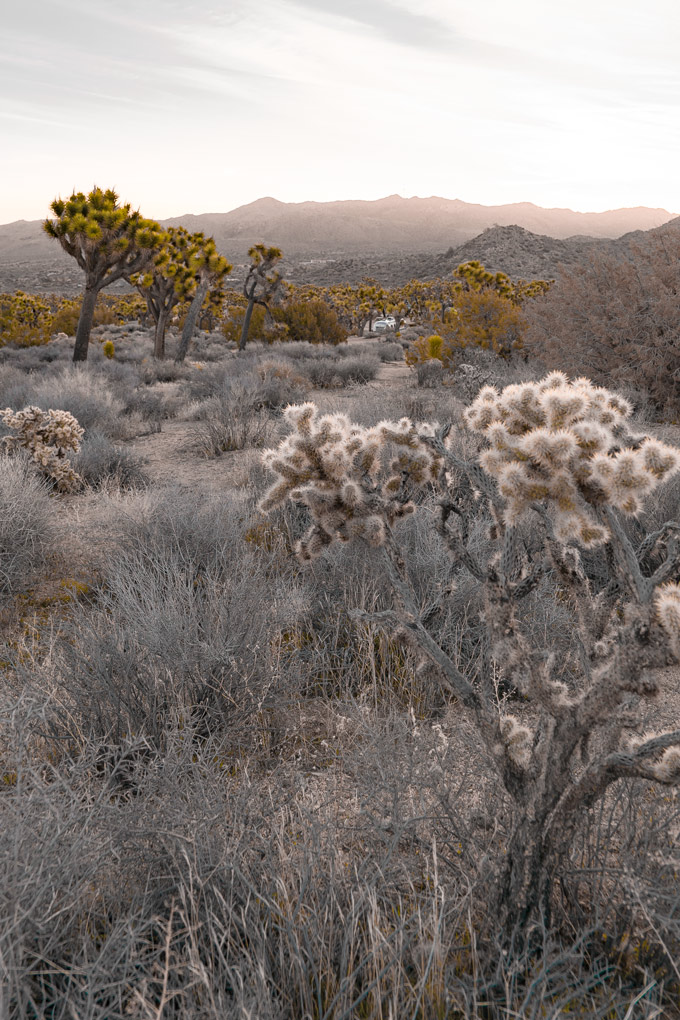 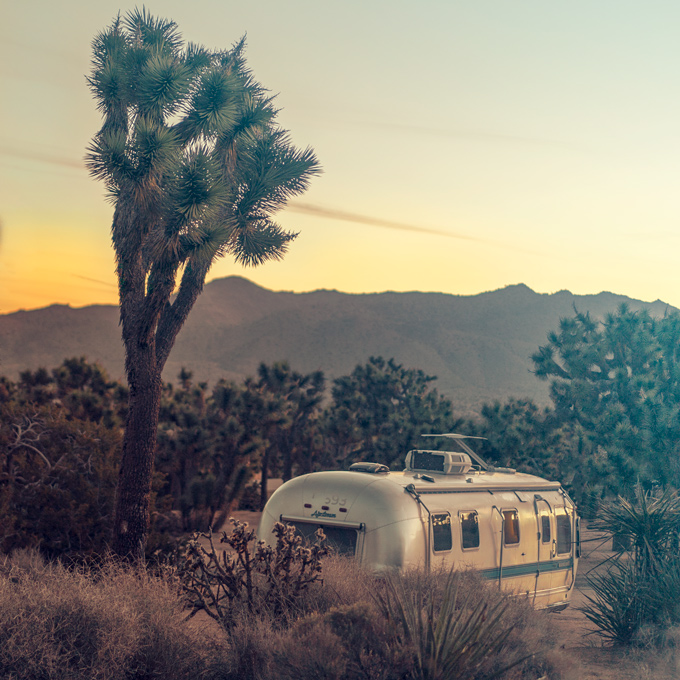 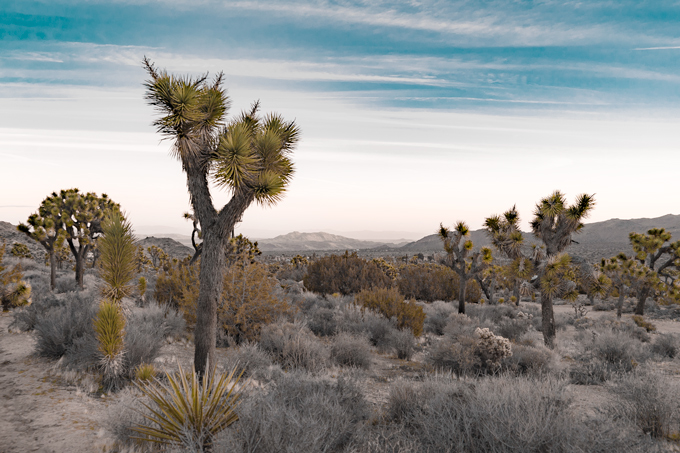 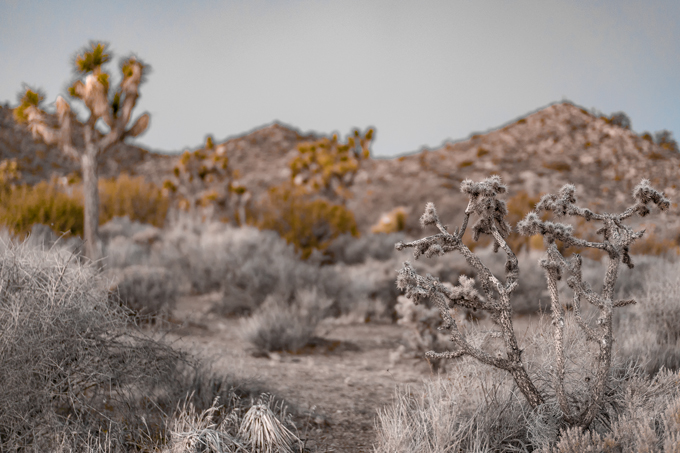 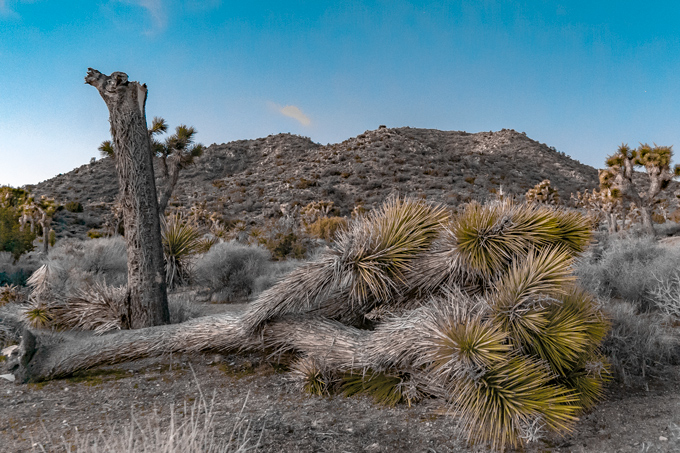 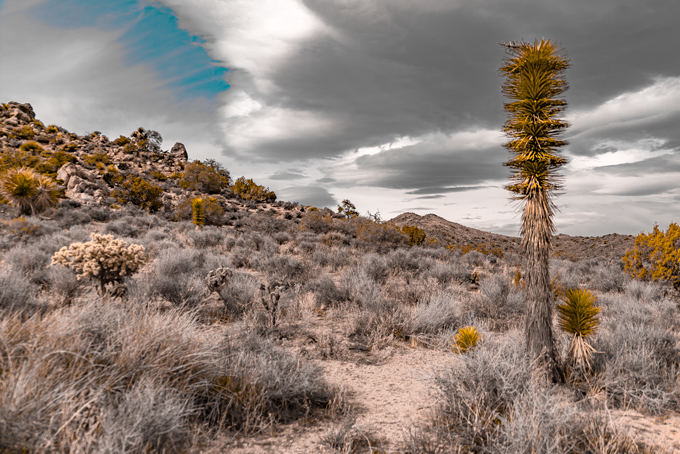 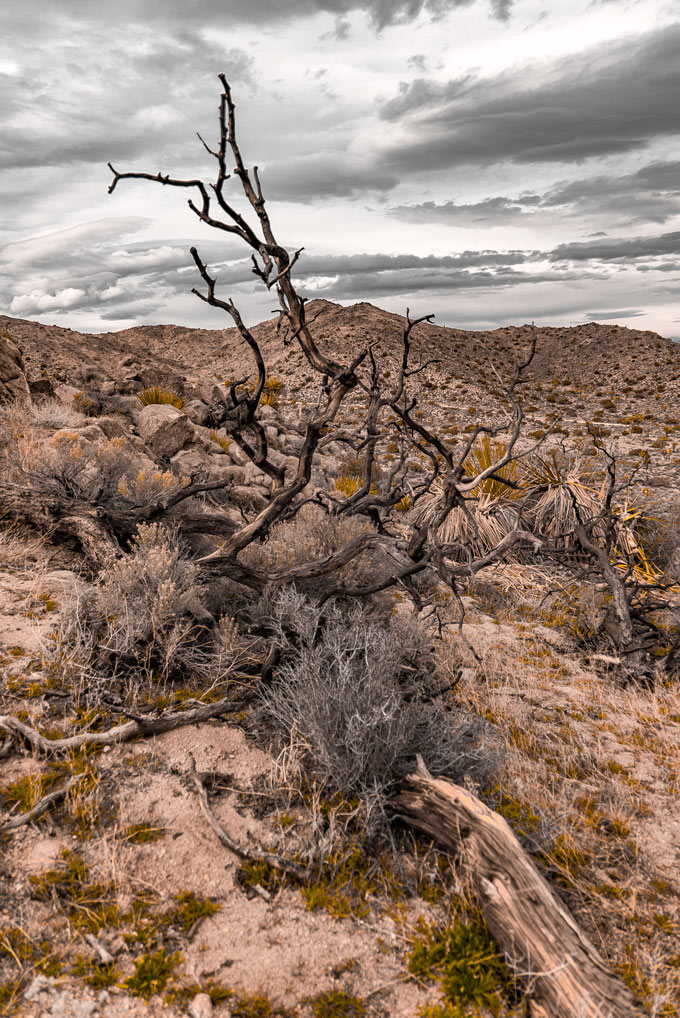 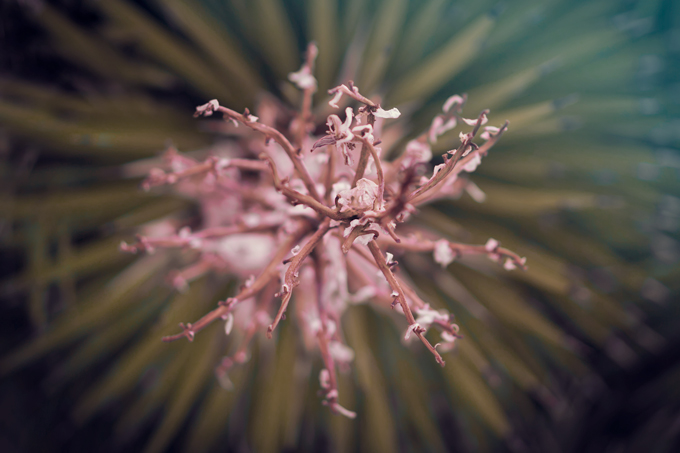 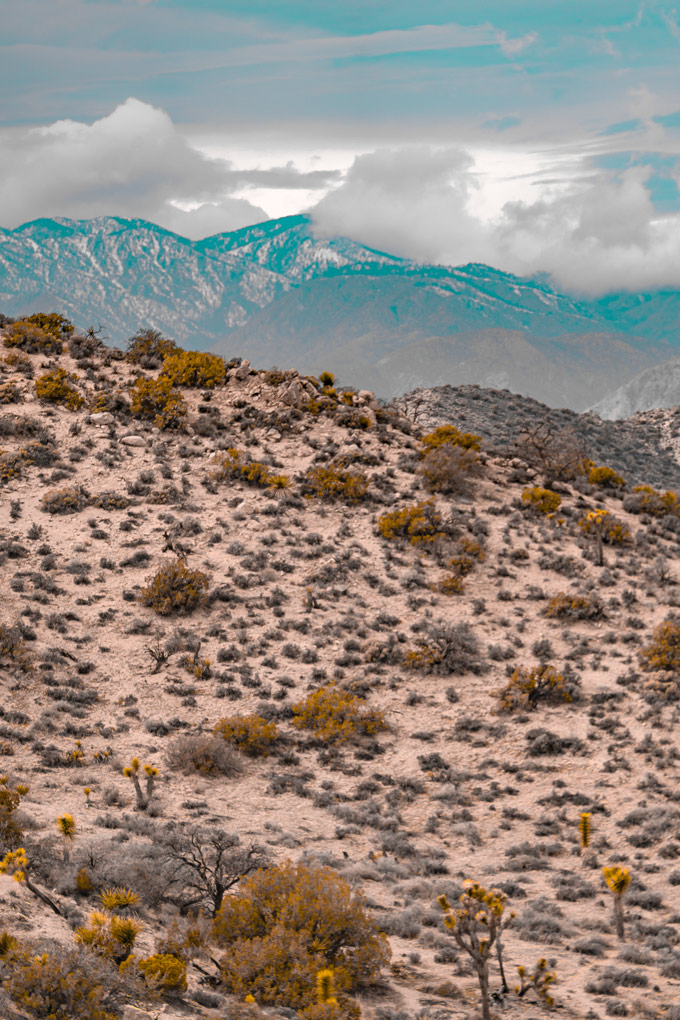 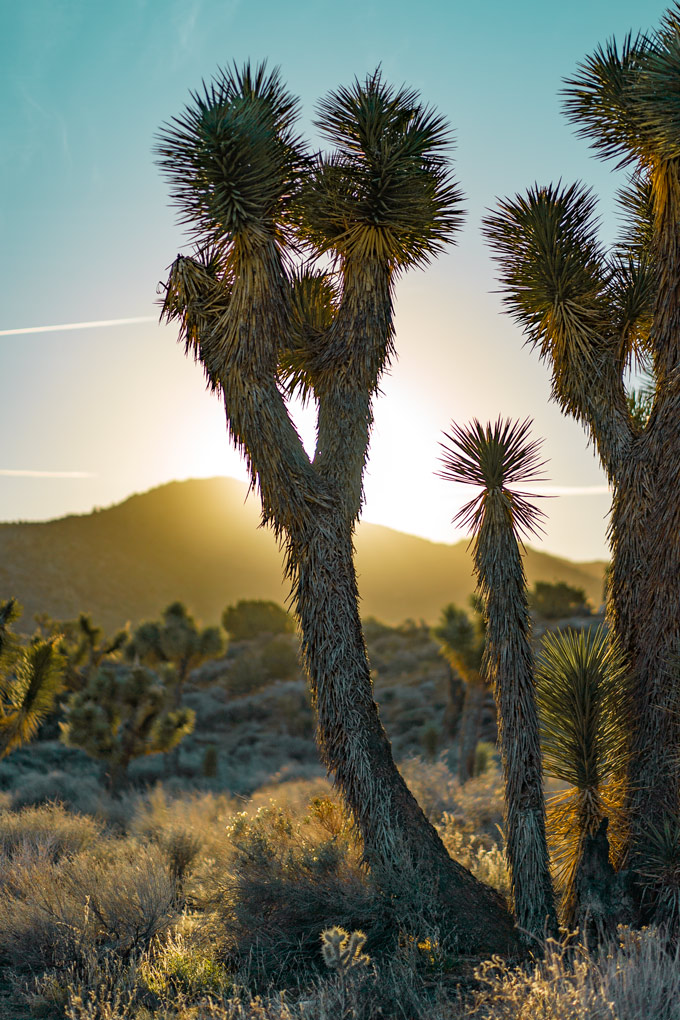 You Always have KILLER pictures. always look forward to your posts

I love these photographs! You have such an eye for the beauty of things. I’m sure Joshua Tree helped a little too – it looks like a gorgeous spot to camp. There’s something so alluring about the dessert.

Wow this place looks amazing! I love all the different tones and hues and the shapes are nothing like I’ve seen before! I too like to enjoy nature in silence and solitude. I do not understand people shouting at each other in the great outdoors.

These pictures are amazing. Glad you decided to hike up and could capture those gorgeous pictures. The rich flora fauna of desert life are rare to find. Joshua Trees are enigmatic indeed 🙂

I’ve been seeing lots of photos of Joshua Tree National Park on IG and I’m dying to go! Doing a road trip through the US national parks in an Airstream sounds amazing. We’d love to do that in the next year or two! Your photos are stunning as per usual 🙂

I totally see what you mean about the trees. They are so unique – I love the shape of them, it almost looks like they would be moving. It sounds like an incredible moment spent at the Joshua Tree National Park. The sunset looks so magical – and you managed to capture your photos so beautifully.

I always think of the U2 album when someone mentions Joshua Tree National Park. I visited here on a school trip years ago and was fascinated by the different shaped trees. You have captured them beautifully, you must share one of those sunset shots on instagram!

These are amazing photos! I know that I won’t be able to take this kind of photos. I have not been to a place that is similar to this. What else did you do aside from taking photos?

Not only are your videos great, your pictures are equally impressive. I am
an adventure enthusiast and this is exactly the kind of places I like to
explore. I loved theat picture of the backpacker in the middle of the thorny
jungle.

Its really amazing to click photos like this. JOSHUA TREE NATIONAL PARK is an adventure place and I just love the adventurous things. Trees are unique, great read! Thanks for sharing.

Again, I am here. Thanks for your wonderful sharing and discussion. Your opinion and idea really very great. Thanks for your suggestion. Keep on good work. All the very best to you further ahead.
Cheers!!!

The landscape and vegetation of Joshua Tree National Park is just unique. Your photography is just first class and really makes me want to go there and experience the place. There is just so much beauty in nature.

Thank you so much, Nicole

Your pictures are absolutely stunning. I had never heard of this place before now but wow. Its so pretty here

Looks like your 5 mile trek got you a lot of drool worthy pictures. Being an outdoor aficionado, these pictures are really impressive, and would love to visit the place some day only to explore the place at my own pace.

I love plants and gardening and lush foliage is my all time favorite. I’ve always thought of these types of trees are sort of …dull. Your video and photography shows them in such an artistic light. They are all gorgeous! Thanks for showing them off to their best advantage!

Thanks for reading, Natalie!

Your photos are breathtaking! You have excellent photography and editing skills. 🙂 These make me want to see Joshua Tree National Park and stay in a camper van just like the one in your photo!

wow, this is impressive. Love all the beautiful pictures, but most of all the purple sky…how pretty is this?!? I would’ve to visit Joshua Tree, so these many pics are a real inspiration.

I always love your pictures! They are so stunning and amazing. I love the shape of those trees! Would love to visit this place!

wow! Amazing pictures! This national park is high on my bucket list. Hope to visit it next year! 🙂

I hope you get to visit JT, Marlies.

Wonderful pics of Joshua tree State Park! I haven’t been there in too long a time. But I remember how HOT it was during our visit.

you have such beautiful photos! Joshua Tree National Park has its own uniqueness! I just went there few months ago and may go again soon this summer! I still need to see the milky way!

Awesome. I’d love to see JT in different seasons AND the Milky Way! Thanks for reading.

So pretty! We missed this park! We were so close, but had so little time on hand, had to give Joshua National Park a miss…