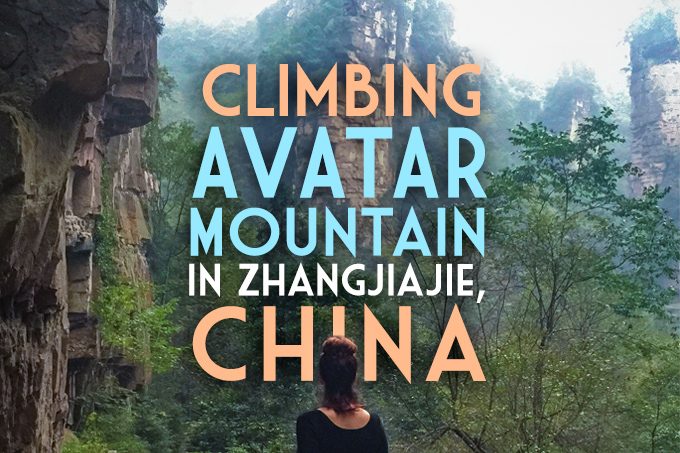 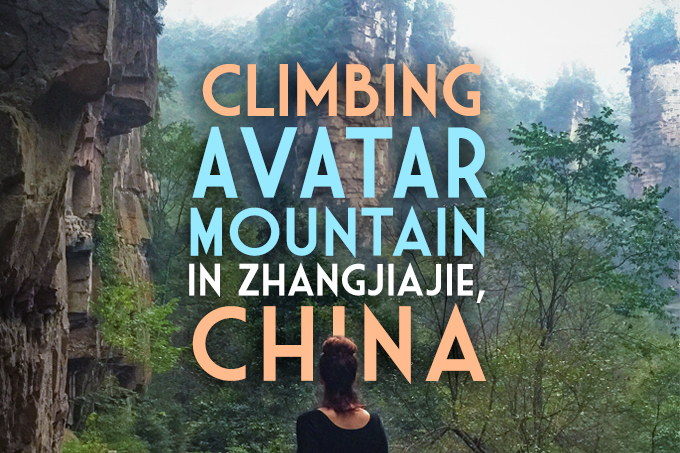 Films often inspire my travels. I saw “Avatar” when it came out in 2009. Despite the obvious inspiration in the film, that wasn’t what moved me to visit China’s floating spires at Zhangjiajie National Forest Park. It was actually another film, a documentary, about BASE jumpers. BASE jumpers are those crazy people in squirrel suits who jump off of tall buildings and mountains. In the film “Wingmen“, three men jump off Tianmen Mountain, which is also in Zhangjiajie, China. I visited both parks, but this post is dedicated to Zhangjiajie National Forest Park.

[slogan]The footage of the mountains was breathtaking. I had to see it for myself.[/slogan]

The park was established as China’s first national park in 1982 and in 1992 as a UNESCO World Heritage Site. At 11,900 acres, there is tons to see. Though the park is popular with Chinese tourists, few Westerners make the trek. We were constantly asked to take selfies with Chinese tourists!

It wasn’t hard to get to Zhangjiajie from Guam. I took a four-hour flight to Shanghai, stayed overnight, then flew two hours to Zhangjiajie (for $50, yo). As a budget traveler, I’m always looking for ways to travel with miles. I spent 30,000 miles on this trip. You can also reach Zhangjiajie via Beijing.

We worked with China Highlights to get information about the area as well as a photography guide. We also hired an English guide. Our guides helped us purchase tickets, get the lay of the land, and find the best spots to take photos and shoot our travel film. China Highlights provides a multi-day tour package of Zhangjiajie. Rebecca He was our point of contact at the tour company and was incredibly helpful and flexible, providing info not just about the park, but about our next destination, Guilin.

After one day with the guides, we spent the next week exploring the park on our own, which was a challenge considering the lack of English speakers or information. If you have any questions about this area, ask in the comments below.

Getting to the Top

From the Yangjiajie entrance, take the cable car up the mountain to get a bird’s eye view. 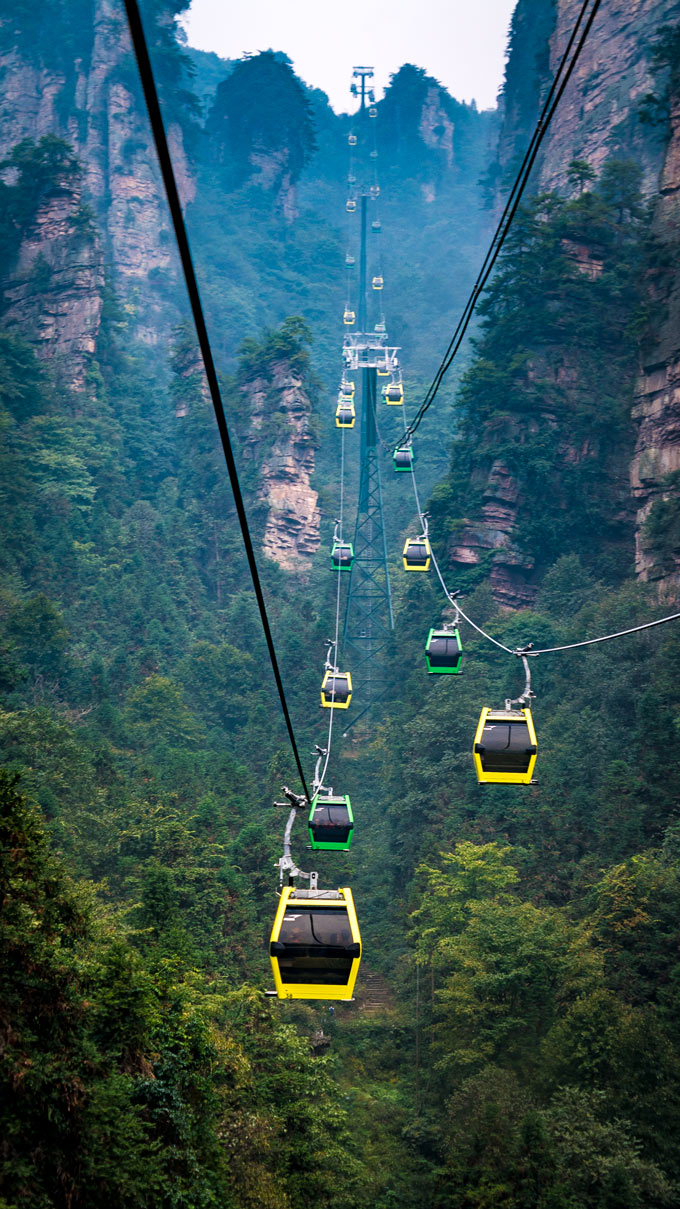 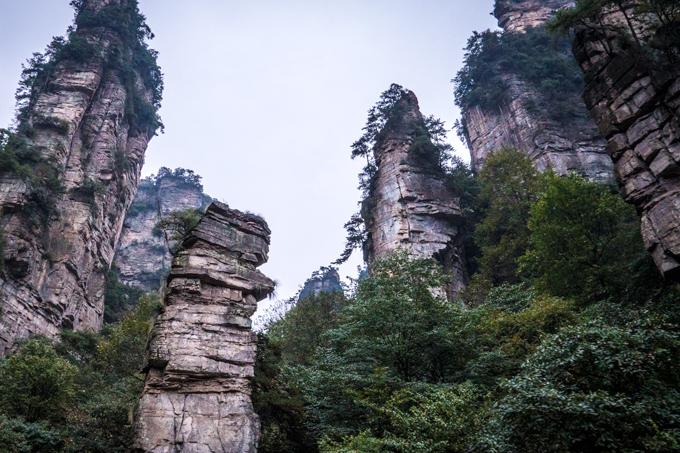 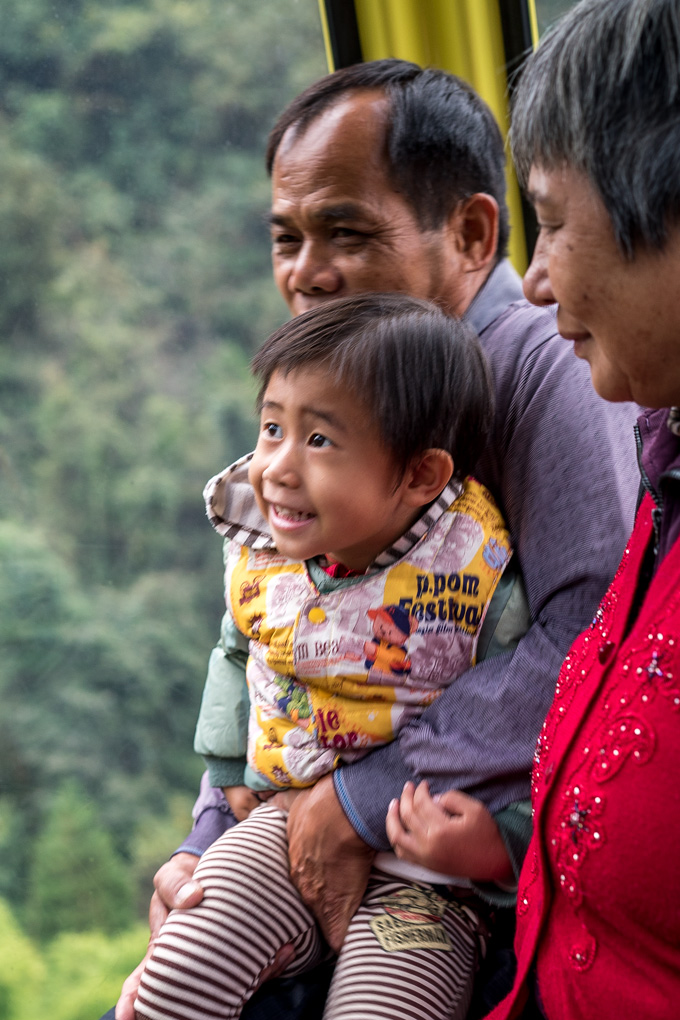 Up for a gut-busting hike? Take the path under the cable way instead of getting on the cable car. We took the fork to the right and discovered a trickling stream, cows grazing, monkeys darting across the trees, and the most gorgeous canyon I’ve ever seen. 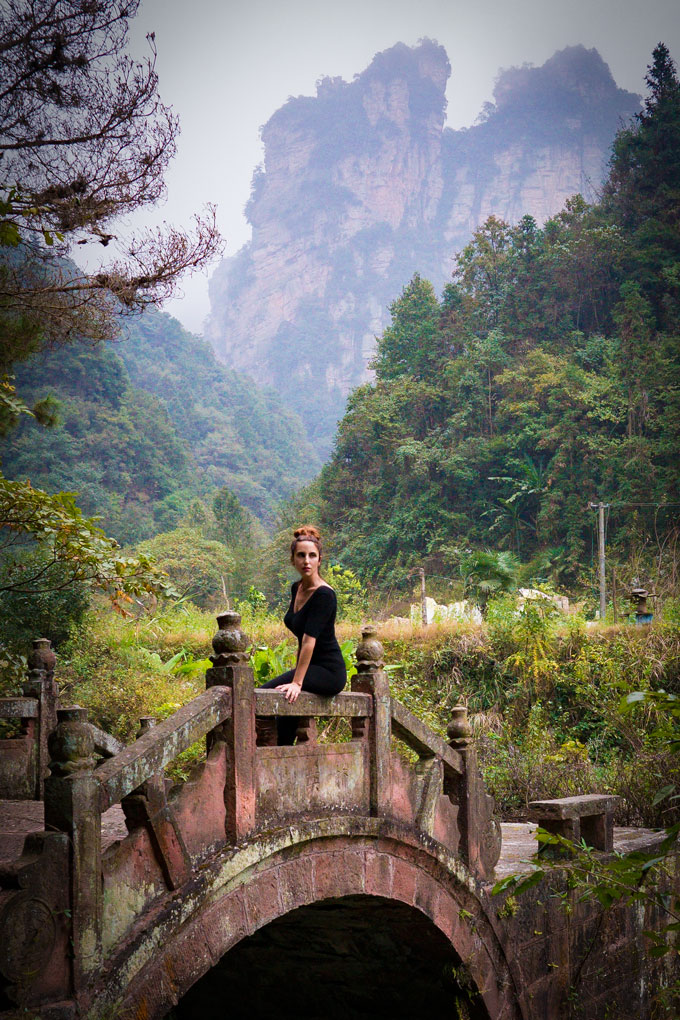 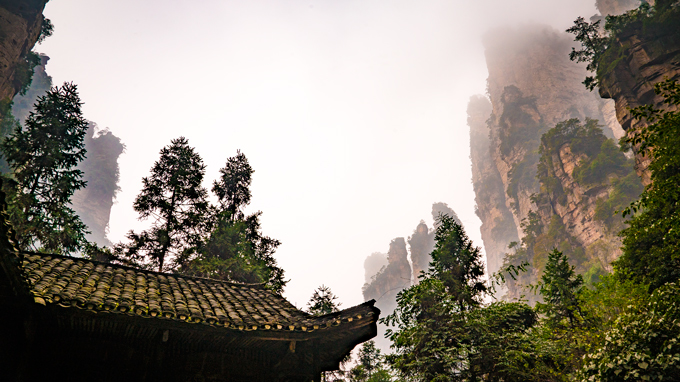 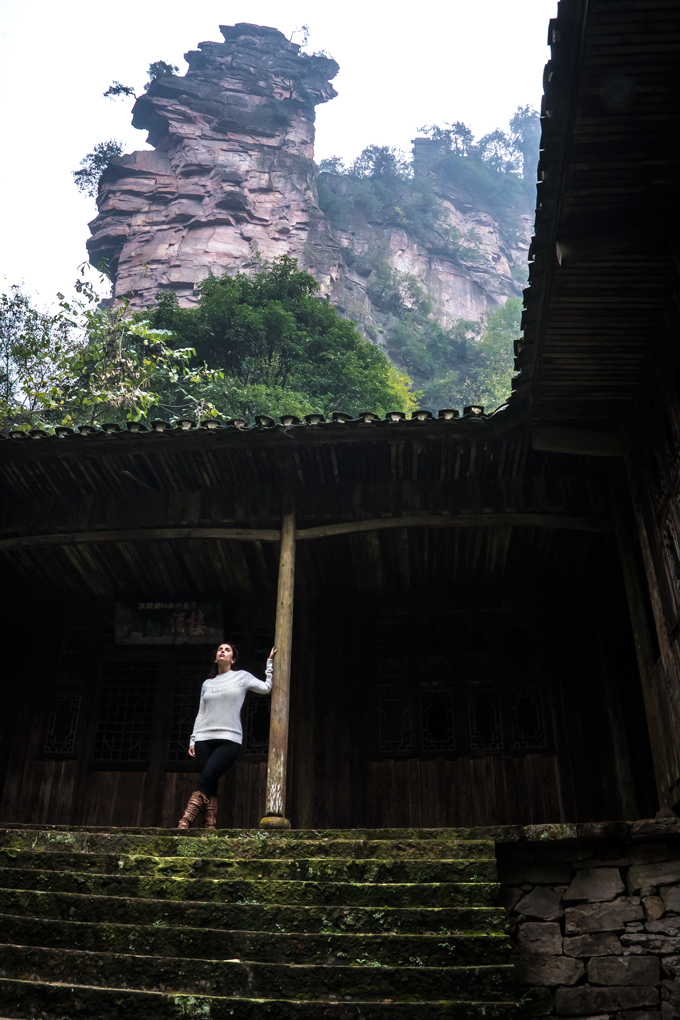 My sexy husband makes a rare photo cameo at a spooky abandoned building along the path. 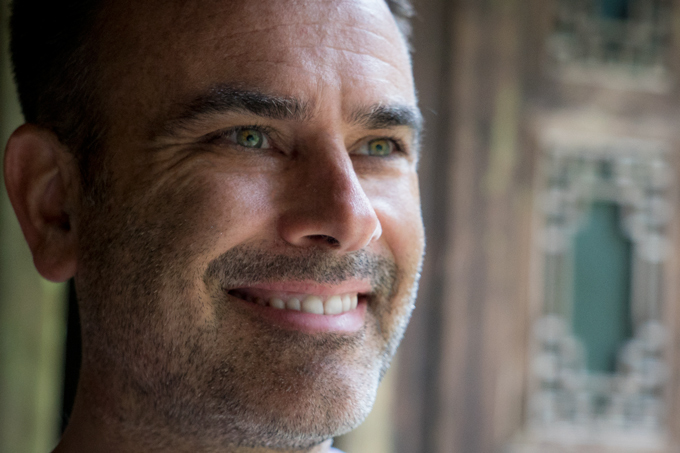 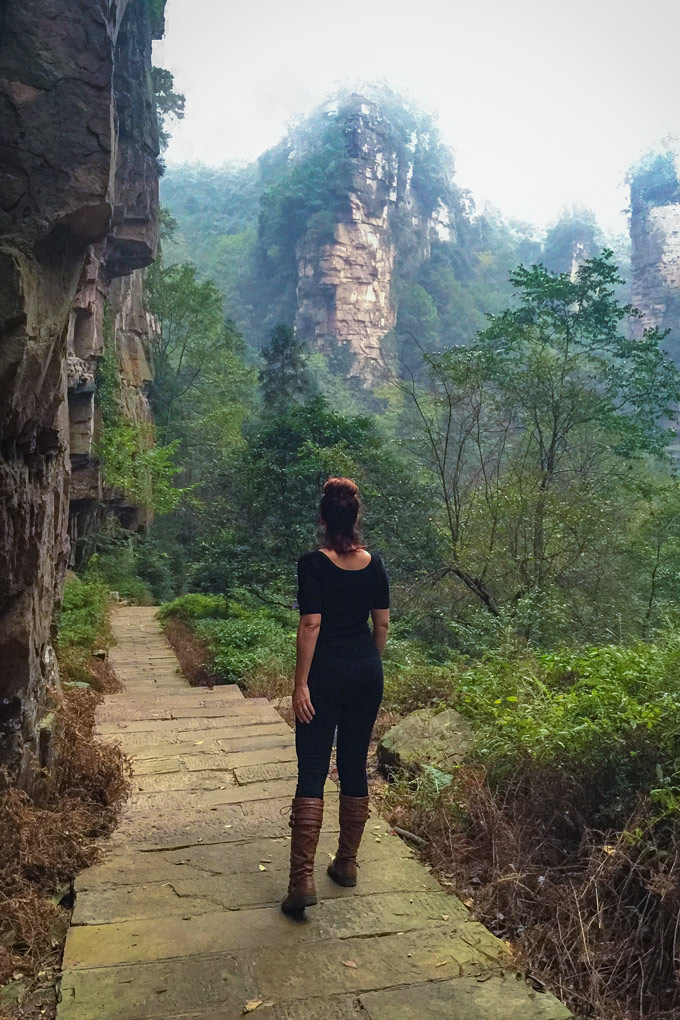 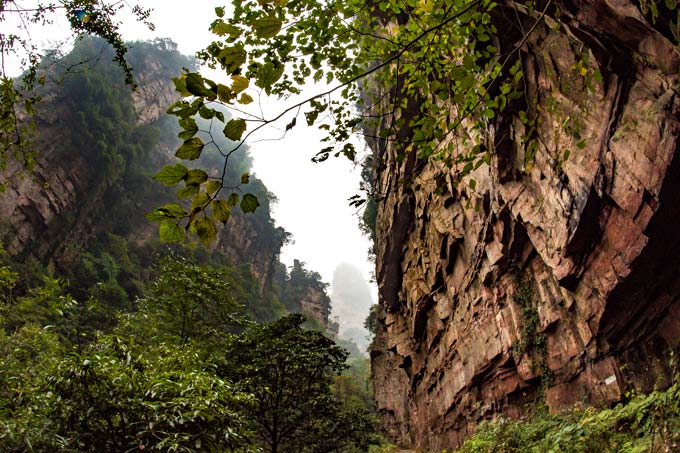 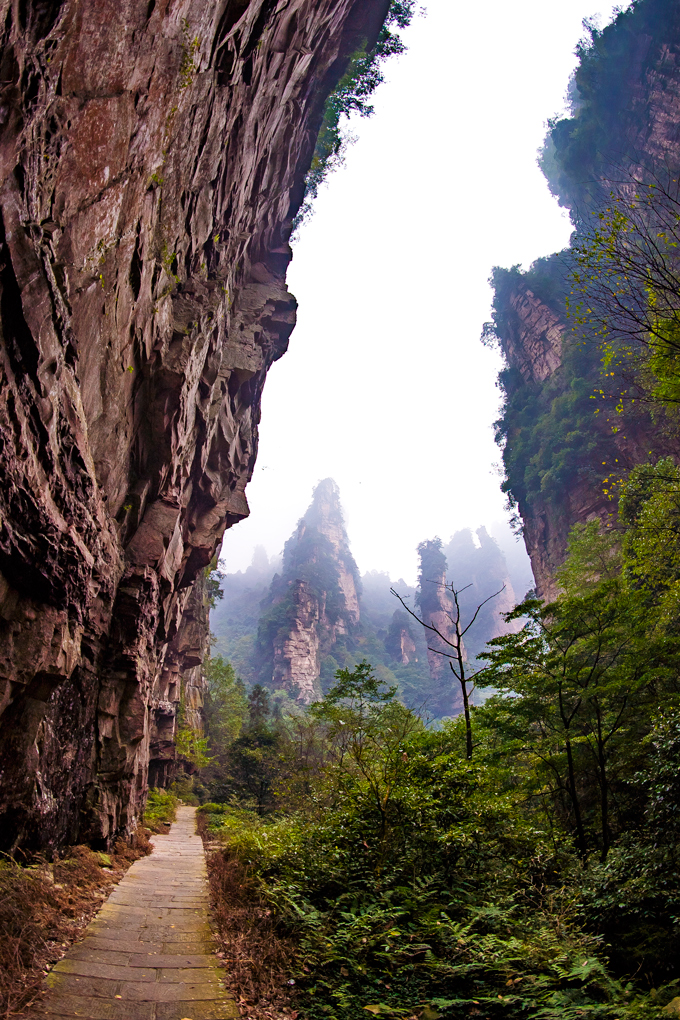 Bonus points to anyone who can identify this punk rock caterpillar. 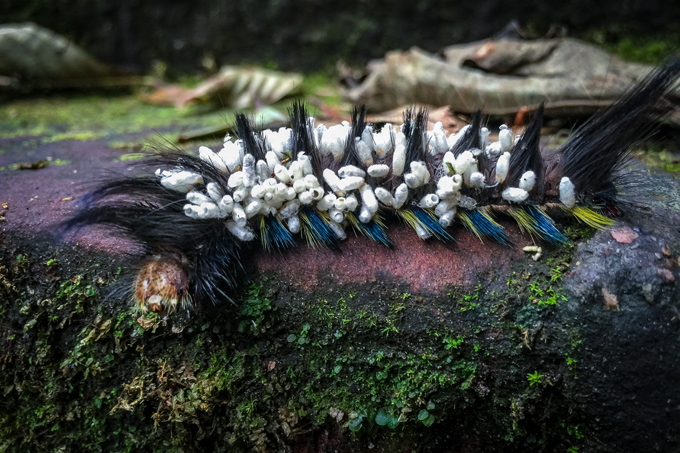 The path winds up the karst spires on “One Step to the Heaven.” All the paths have mystical Chinese names that reveal nothing about their difficulty level. As the atmosphere enveloped me and the wind got stronger, I knew “One Step to the Heaven” was a huge misnomer. Chinese tourists coming down the mountain were unable to understand our single question: What is at the top?! 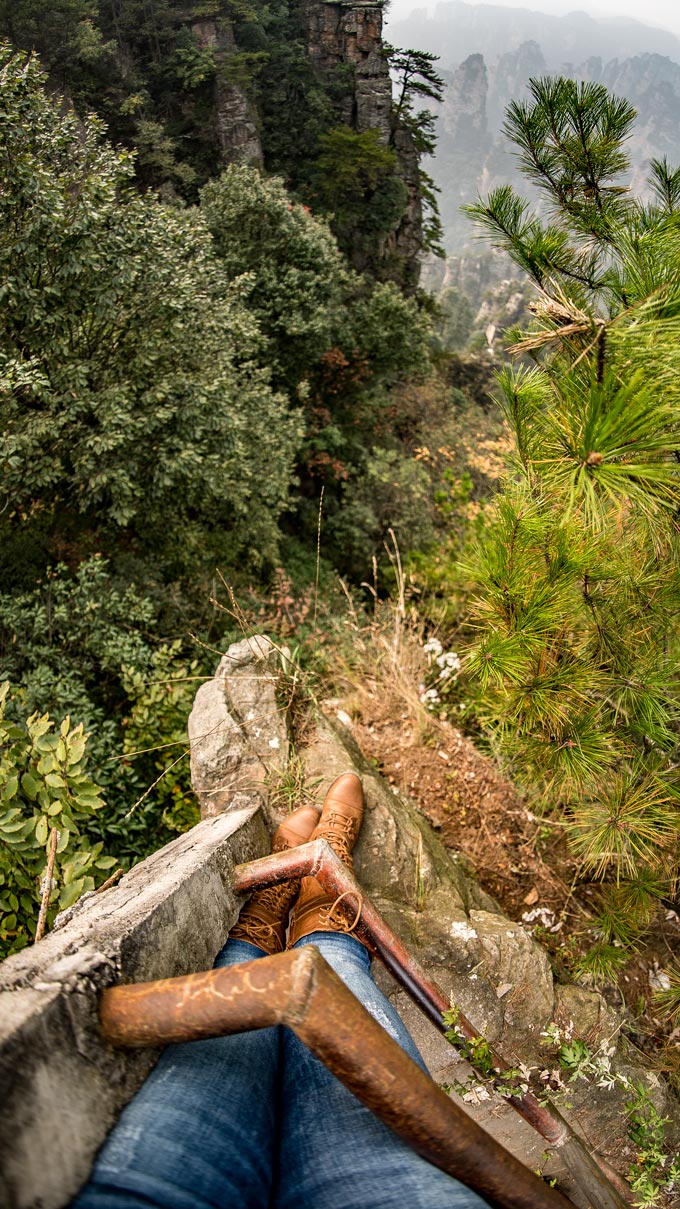 Undismayed, we continued climbing the stone stairway to heaven for several hours. The stairs got steeper and the path narrower as we trod upward. The last sign we passed was a perplexing Chinglish warning and we decided not to go any further. We had climbed a couple thousand vertical feet and still had no idea how long it was to the top. It was hard to admit defeat and come back down the mountain, but it was nearly dark and we didn’t want to be stuck in the park overnight. My Yelp review would have read: “Less stairs, more monkeys.”

All joking aside, I am in love with these mountains. My knees felt like jelly, but my heart was full.

Know Before You Go*

*All prices circa November 2015 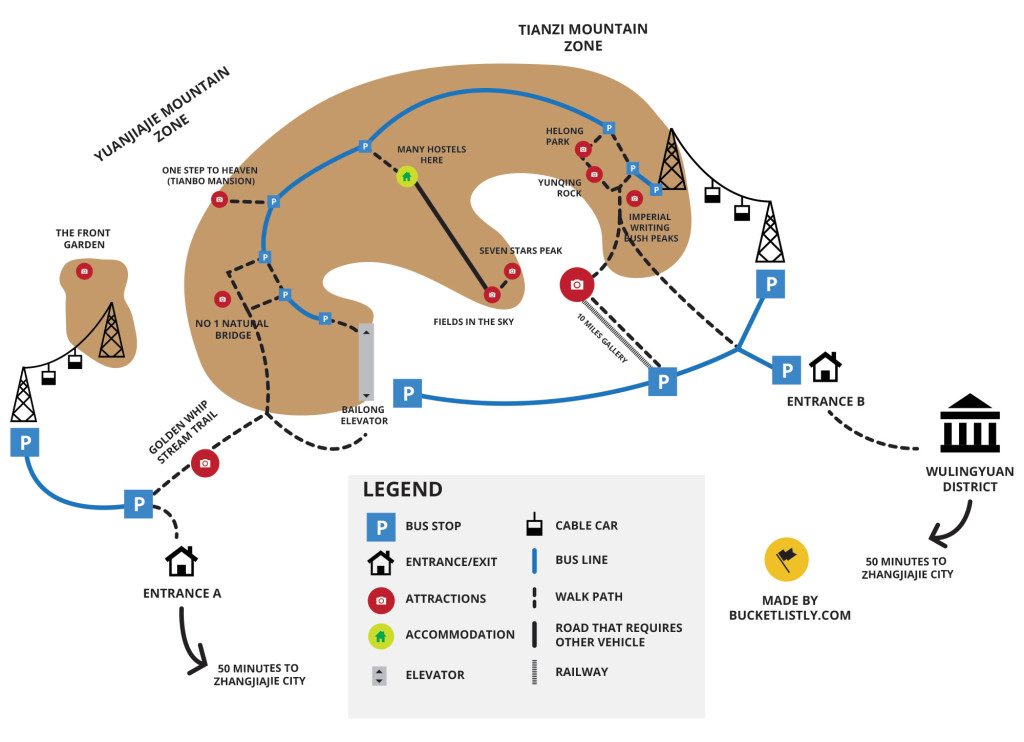 Has a film ever inspired you to travel?

Beautiful pictures!
I’m totally into hiking, cable car is always last resort 🙂
Maybe, if I’ll be lucky enough, I’ll visit Zhangjiajie Park one day and I’m wondering if there are any dirt trails? I’m not a very big fan of hiking on concrete paths…

Hi Joanna. I didn’t see any dirt trails, but there were some pockets of the park I didn’t explore.

I had no idea Avatar was filmed there! Looks like a truly stunning place, and that punk rock caterpillar is the coolest one I’ve seen ever. I’m very curious to find out now what the top looks like, or what the views look like anyway, would you ever go back to try it again you reckon?

When we lived in China I heard great things about this part of the country but we never made it over there. Gorgeous photos! I’m definitely going to have to go back to China someday!

I’m actually headed to China in January and reading this made me even more excited about my upcoming trip!

You travel everywhere! I love it! Seriously hope you come by Seattle some time. Would love to link up!

I’m heading to China next year and I’m definitely looking forward to exploring some of the stunning national parks there. This one is being added to the list, it sounds like a grand adventure.

This looks like so much fun. I have never done a cable car but I really want to. Sounds like there is a lot to see, if we go we would take your advice and stay more than three days for sure. We would love to see as much of it as possible

I will use cable car because I love to see the whole view of downside from top. Hiking is beautiful but very hectic for me. I can climb down but goint up is a task. Nature here is superb and I like the photographs of pillar rocks.

Looks absolutely amazing. I ridden on a similar cable car to the top of a mountain that had a trail you could hike instead. But like I said, I took the easy way by cable car. This park looks like it would be worth the hike.

Yes, worth the hike! You will lose weight in China!

This is really the Avatar world! It looks unbelievable. You should have spent a week exploring this massive park. I think there are so many options to navigate this area. I would choose the cable car first. There are probably a variety of species that live here too.

Thanks for reading, Marissa!

The landscape here is so incredible – even more so than the Avatar film it inspired. I can totally understand your desire to see it yourself. I hope to explore Zhangjiajie National Park myself one day. My China list just keeps getting longer and longer!

Oh I know. So much of China to explore!

Whoa! I didn’t know you could visit those mountains. I have
seen the movie and had loved it. I didn’t know these existed in China. Like you
I would also prefer a hike over cable car. You observe and connect more that
way.

I’m impressed with the Avatar connection, I can see it in your pictures. I just IMDB’d Wingmen, it will be interesting to see this movie when it comes out. It sounds like fun working your way around the park with the Chinese maps!

Oh, Chinese maps. They’re funny if nothing else.

I have been reading so much about Zhangjiajie National Forest Park after Avatar that I can’t just ignore this amazing place! Stunning pictures! The caterpillar totally rocks! My God 🙂

Wow! Just wow!! We, too, love the visuals of the movie Avatar and I had no idea you could see such amazing things in real life! We have not visited China, but it is high on our list and wow – we can not visit China without seeing this magical place. The photos are nothing short of stunning!

Thanks, Natalie. I hope you see it with your own eyes one day. Magical is right.

This has been extremely helpful! Getting information has been difficult as I am sure you know. I was already booked at the No. 5 Valley Inn and have been questioning that but you have re-affirmed that I absolutely made the right choice for me:) I had one question, it seems that you hiked the route of the cable car instead of taking the cable car, correct? How long did that hike take? I appreciate your insight, thanks!

Hi Marc. So glad this was helpful. We took the cable car up and back, then did a separate hike for hours but never actually reached the top. It’s a long and steep hike. We spent three days in the park and didn’t see it all.

I need help. I booked No.5 hotel, however I have literally only 1 day in Zhangjiajie. How can I get into the park, do the cable car and get to my train at 7pm? Please help! I’ve been researching it for hours and it looks like getting to the entrance alone will be over an hour!

Have you called No. 5 hotel? They can usually provide a ride to the park entrance if a driver is available.